Mom waits 16 weeks for unemployment benefits: 'It just feels like a losing war' 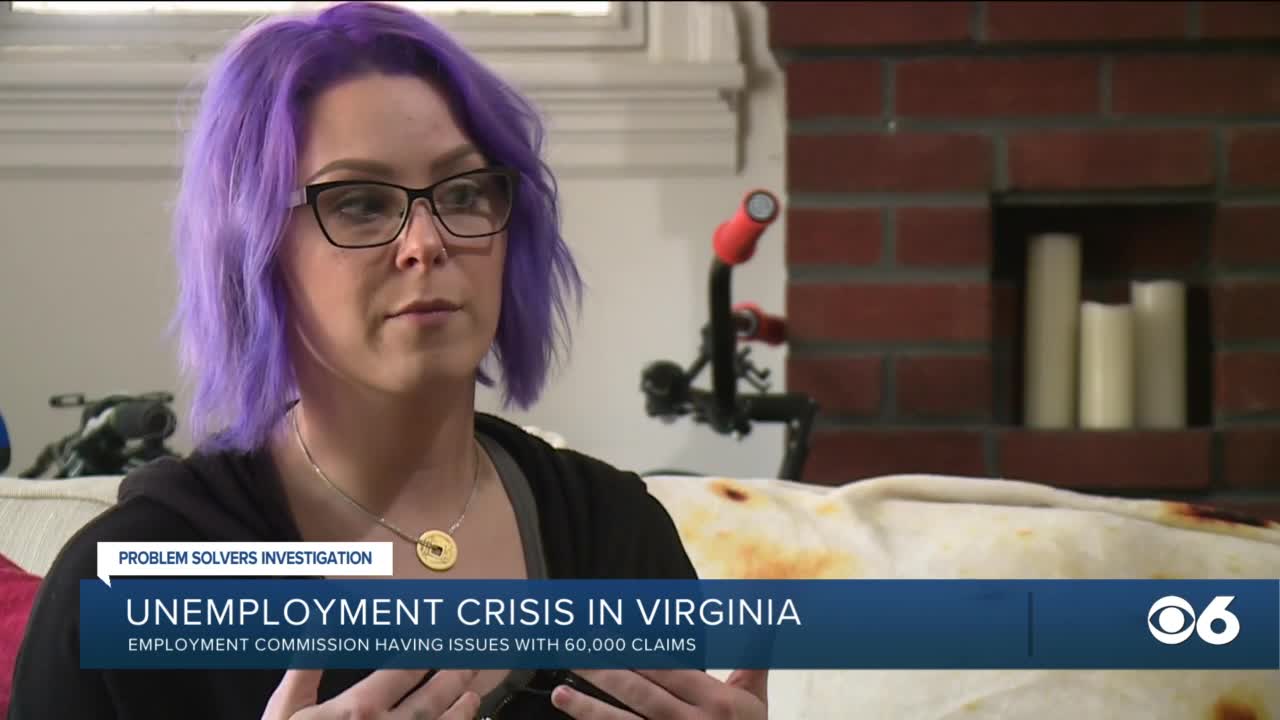 Amanda Clemons' employer terminated her in March, she applied for unemployment and received benefits. But the Virginia Employment Commission (VEC) abruptly stopped her benefits after two months.

RICHMOND, Va. -- Monitoring her fourth grader's virtual learning by day, and working at night, leaves Amanda Clemons little time for rest. But, the single mom is thrilled to have a job after being out of work for four-and-a-half months.

When Clemons' employer terminated her in March, she applied for unemployment and received benefits. But the Virginia Employment Commission (VEC) abruptly stopped her benefits after two months.

Clemons' claim turned out to be one of 60,000 that the VEC said needed to be investigated because her employer told the VEC she was fired for cause.

That meant the VEC had to investigate and talk to the employer as well as the claimant before deciding about benefits.

When we met her in July, Clemons had been waiting roughly five weeks for her case to be adjudicated.

At the time, the Governor's Chief Workforce Advisor, Megan Healy, admitted there was a backlog.

"It's around six to eight weeks and that is the backup," Healy said in July.

But, she said changes were being made to speed up the process.

However, it's now late-September, and Clemons has now waited for 16 weeks.

"I still haven't been called to have my side of the story and my evidence produced for them, I haven't been interviewed," Clemons said.

She has a new job, but it's temporary, pays an hourly wage, and does not include benefits.

"I was still unemployed for five months due to coronavirus, five months is a long time to not be able to pay bills," Clemons said. "I'm still behind on my car payment, I'm behind on our power bill, and my internet bill for my son to use schooling."

When CBS 6 Problem Solver investigator Melissa Hipolit tried to ask Governor Ralph Northam about the delay, he ended his press conference before taking her question.

"Does seem long, we are still in the six to eight week period, we have actually tried to triage many of the claims, so we have special adjudication officers that are working certain issues," Healy said after the press conference.

Healy added that the hold up could be due to a delay in getting the needed information from Clemons' employer.

"A lot of times, most of these, they have written to the employer...so having to go back and forth with the employer to get the documentation before the adjudication process, is needed," Healy said.

Whatever the reason, Clemons said she is fed up with what she thought was her state's safety net.

"It's literally just me rallying against this big entity with an anonymous face and I can't get any kind of relief, it just feels like a losing war," Clemons said.

Still, Healy said the number of claims with issues remained close to 60,000.

We also spoke with six people from all over Central Virginia who are waiting to hear if they will get unemployment benefits from the state.

Among them, a nurse, an Uber driver, and a house painter, who are all out of work because of the pandemic.

Their unemployment claims are among the 60,000 the VEC said have issues, and they all said they're frustrated.

"The people that I've gotten on there, they leave me on the other line hanging. I'll be on the other line, I'm waiting, two hours pass almost, nobody is going to come to the phone?" Al Burton, who used to drive for Uber, said.

"I think the outlet of communication has just been terrible really for the unemployment office. I know I've tried to reach out to the Governor myself. You feel lost in a whirlpool," Michael Standaert, who said he lost his job when he could not come in for work one day because he had to care for his elderly grandmother, said.

"On June 10 [benefits] abruptly stopped. I kept calling, I got a hold of one person, she didn't understand why it had stopped, said it was being deferred to a deputy to review it, and I would receive a letter, as of today still no letter, still no benefits," Sally Walker, who owns a small business that she was only recently able to re-open due to COVID-19, said.

"It's just the frustration of not getting answers to me, you can't get no one to call," Tony Durrette, a house painter who lost his job back in March due to the pandemic, said.

Thankfully, Durrette reported that the morning after during an interview with CBS 6, his benefits suddenly appeared in his bank account.