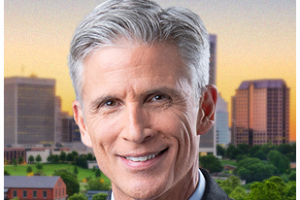 Bill has been the evening anchor at CBS-6 for more than 10 years. One of the things he appreciates most about working in the capital of the Commonwealth is being an integral part of the CBS-6 political team. He has moderated numerous election-year debates, including the US Senate debate in 2014. Bill's other passion is for helping children in the Virginia foster care system. Every November he works on the CBS-6 "Hand to Hold" series, in which a different child is featured every day.

Bill comes to WTVR from Raleigh, N.C. where he was the evening anchor for two years. While there, he reported on green issues including: green homebuilding, composting by way of vermiculture (that’s right, worms!), and hybrid vehicles. “Since I’m driving alone 90% of the time, it makes sense for me to drive a hybrid. I’m now determined to keep the average mileage gauge above 50 mpg. It’s changed the way I drive.” And 10 years later, that car is still going!

Prior to Raleigh, Bill spent several years as an overnight and weekend anchor for MSNBC, covering breaking news and the top national stories of the day. Among the many stories he broke on MSNBC, Bill was on the desk when former President Gerald Ford died. “Interrupting The Tonight Show (on NBC as well) was nerve-wracking, but it helped to focus on just getting the message out. My wife was visiting her mother in Nashville at the time. The report came up and my mother-in-law asked Amy, ‘Why is Bill on Jay Leno?’”

Before that, Bill was an anchor/reporter at WVTM in Birmingham, Alabama for five years, covering schools, politics, crime and hurricanes, while anchoring the weekend morning shows. During that period, he spent ten days in New York City on loan to WNBC, reporting in the wake of 9/11. He also traveled to Texas to cover the Columbia shuttle disaster. Bill started his career as a “one-man band” reporter on Long Island, NY, working for News 12 Long Island.

As an avid history buff, Bill says he and his family love Richmond area and are well-acquainted with its rich trove of museums and historical sites. “We also love the proximity to the beach and the mountains.” And Bill is an avid cyclist, helping host the Bike MS 150-200 mile ride to Williamsburg and back to Richmond each June.

Bill has an undergraduate degree in English and American literature from Harvard, where he was also a heavyweight rower, and a master’s degree in journalism from Columbia. He grew up in suburban Philadelphia and maintains a healthy, fair and balanced allegiance to the Phillies and Eagles, although he says he’s willing to listen to any coherent argument on the merits of other franchises. He and his wife Amy have two boys in college, and a daughter in elementary school.