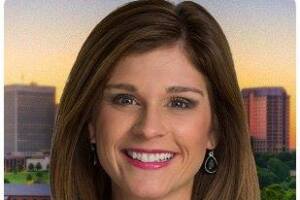 Kristen Luehrs joined the CBS 6 news team in April 2013, as the CBS 6 Morning Traffic Reporter. So far, her proudest moment at CBS 6 is being a part of an Emmy Award Winning newscast.

Kristen graduated from the University of Kansas with a B.A. in Journalism, emphasis in News/Information and a B.A. in Theatre. At KU, Kristen was a member of the Delta Gamma sorority. She is a loyal Jayhawks fan, even during football season.

After being landlocked in the Midwest, Kristen enjoys east coast living. When she isn’t working you can find her playing football or volleyball on the beach or snowboarding in the mountains.

Kristen is both an athlete and a sports fan. As a former cheerleader, she enjoys cheering on the St. Louis Cardinals, Blues, and rooting for the Rams. In her spare time, she loves to bake goodies for her co-workers, especially gooey-butter cake cookies. A St. Louis staple. One is never enough!