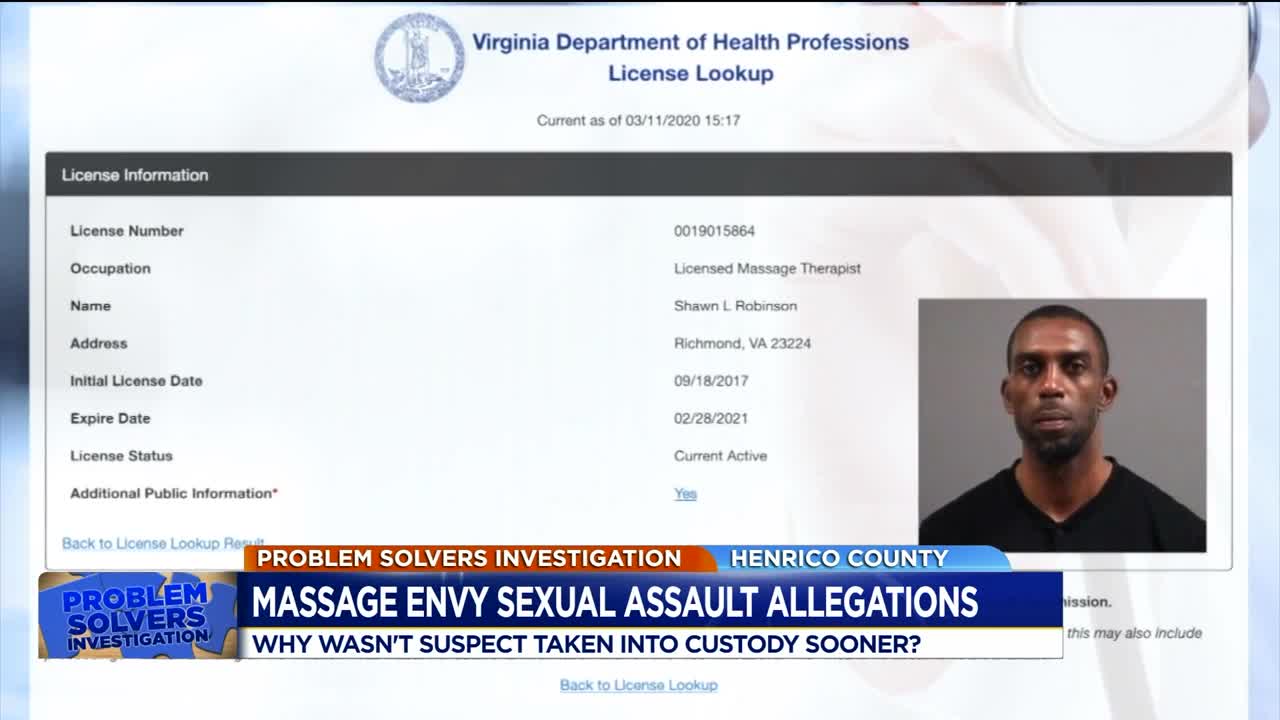 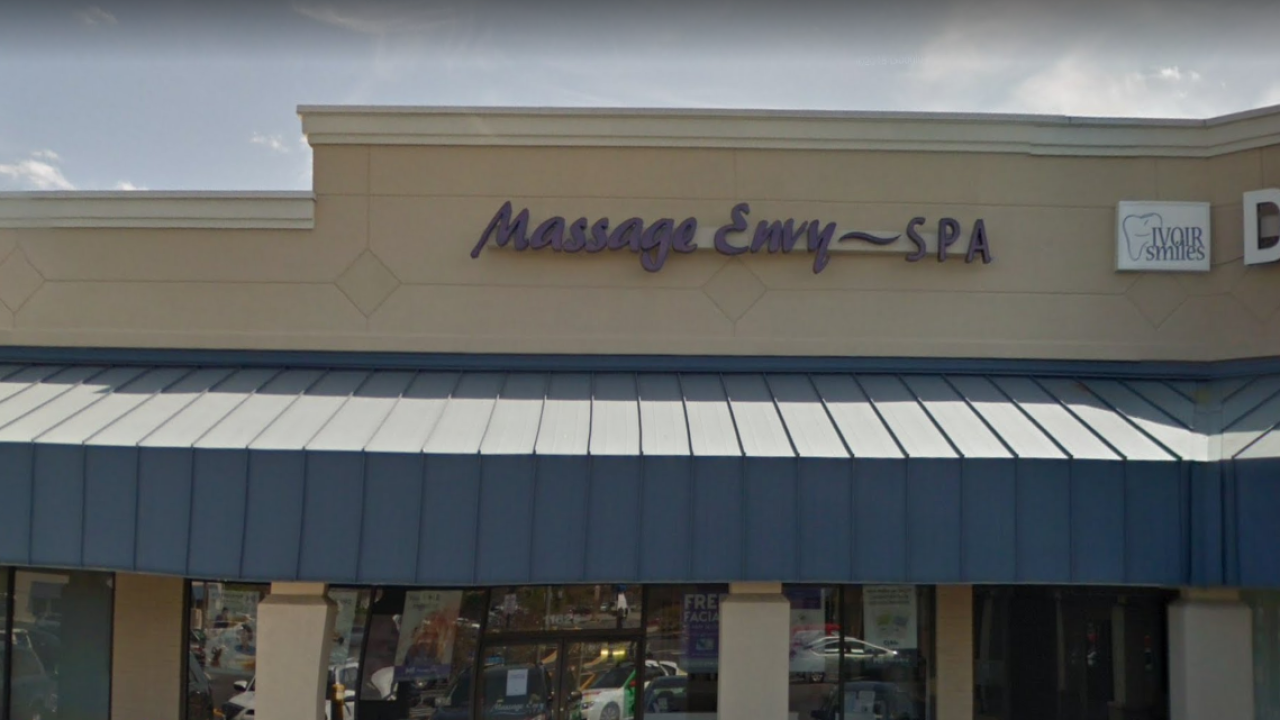 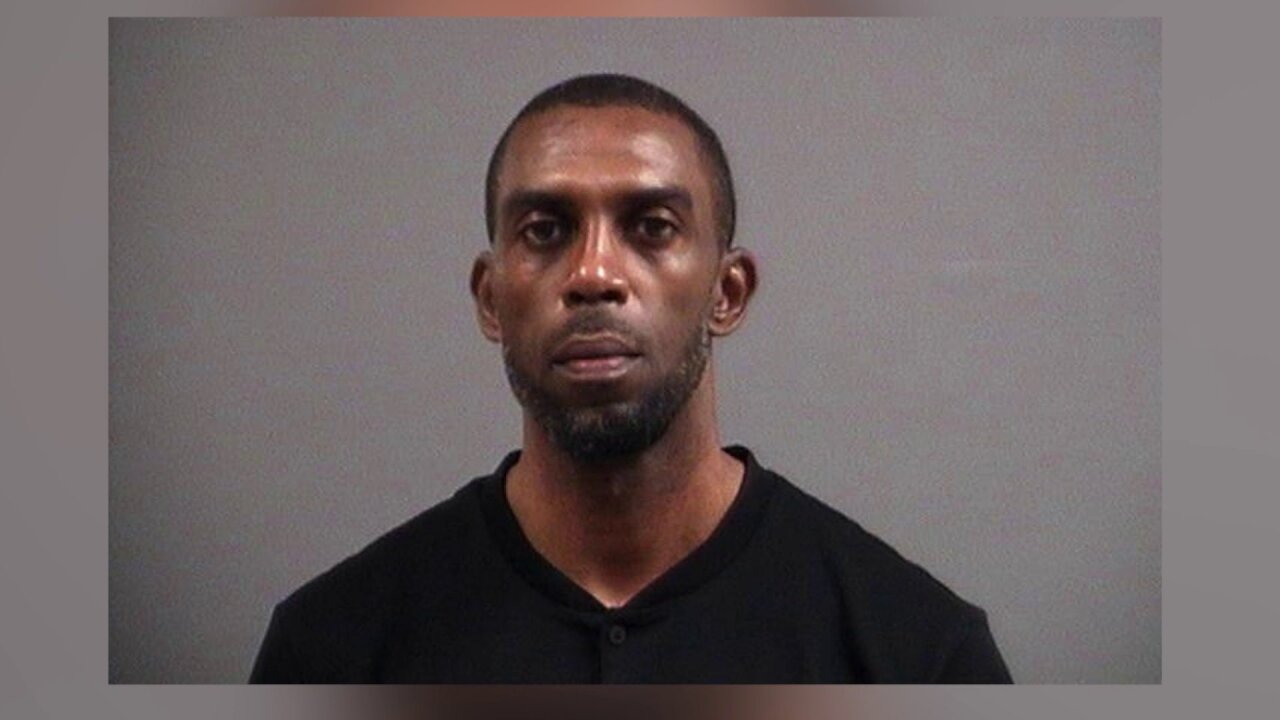 CHESTERFIELD COUNTY, Va. -- On February 12, 2018 a woman visited a Massage Envy on Midlothian Turnpike for an appointment with Shawn Robinson, a licensed massage therapist.

During that visit, Robinson sexually assaulted the woman, according to a civil lawsuit.

Two days later, at the same spa, another woman had an appointment with Robinson.

During that massage, she said she was raped, and a little more than a year later, a grand jury agreed with her.

"I guess just went into survival mode and completely froze up," that woman said.

Stewart Ryan with Laffey, Bucci & Kent, LLP is the attorney for Contino's accuser.

He said the number of sexual assaults that have occurred at Massage Envy locations across the country should be considered an epidemic.

Ryan's firm is representing more than 100 plaintiffs in active litigation against Massage Envy.

"I can tell you the cases we're handling against Massage Envy completely run the gamut in terms of the nature of the sexual contact involved," Ryan said.

Ryan is not involved in the Shawn Robinson cases, which have exposed flaws in the system that is supposed to protect massage clients.

According to Chesterfield Police, by the time prosecutors opted to take the rape accusation before a grand jury in March of 2019, the detective who had been working the case had moved on to another position.

So, a different officer attended the grand jury proceedings and presented the evidence.

That is, until CBS 6 Problem Solver investigator Melissa Hipolit contacted them about this case in February 2020.

Liz Caroon, the Public Information Officer for Chesterfield Police, said a situation like this is extremely rare, and they are looking to build communication redundancies into their system, so it doesn't happen again.

But, even now, a year after his indictment and weeks after he was taken into custody, Robinson still has an active license to practice massage in Virginia.

And, the Virginia Department of Health Professions' website makes no mention of the felony rape charge he is facing.

"When you hear the story, somebody who is on the run accused of rape who still has their license, it's pretty scary and I'd like to fix that," State Senator Siobhan Dunnavant said.

Dunnavant served on the Board of Medicine for three years, and she now sits on the Senate committee that oversees Virginia's health regulations.

"If somebody was considered a threat to the public then their license could be suspended," without doing a full investigation, Dunnavant said.

Dunnavant said the Virginia Board of Nursing could have taken that action, and she's surprised they did not, considering Robinson was once reprimanded by the Board for lying on his license application about past criminal convictions.

"My initial thoughts are that he sounds like a danger to public safety," Dunnavant said.

But, because law enforcement and the VDHP conduct separate investigations, and neither entity is mandated to report a sexual assault complaint to the other, Dunnavant believes the state was in the dark about Robinson's rape indictment.

"I have to believe the Department of Health Professions didn't know that because I've seen them act so swiftly in the past, so we need to make sure that they know when something like that happens," Dunnavant said.

Meanwhile, the head of the Federation of State Massage Therapy Boards, Dr. Debra Persinger, said her organization recognizes the laws in place to protect massage clients vary too much from state to state, and need to be tougher.

"I really appreciate you giving this your attention. This is not an incident isolated to Virginia," Persinger said.

Persinger said her organization is creating a task force to explore how states can start to regulate massage businesses and mandating that owners report to the state when a therapist is accused of sexual assault.

"In this current climate of deregulation, massage therapy of all professions, the consumer needs recourse it needs oversight for sure," Persinger said.

Massage Envy said they could not comment on specific individuals.

The Massage Envy in Chesterfield where Robinson worked has since closed down.

The owner of another spa in Chesterfield that hired Robinson about five months after the alleged assaults at Massage Envy said he knew nothing about the complaints made against Robinson, and he had just assumed the Board of Nursing would pull the license of someone in trouble.

He said he let go of Robinson anyway after just two months for poor performance.