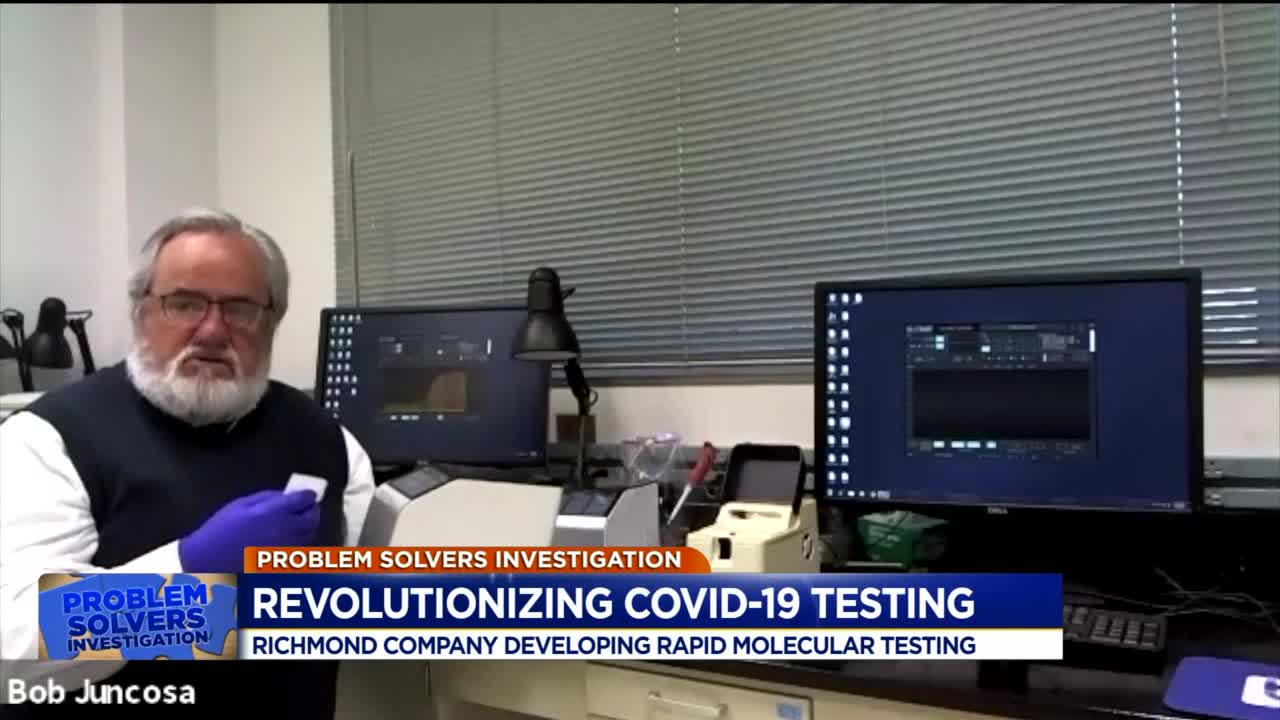 A Richmond company has developed technology that it says could revolutionize the way we test for and diagnose infectious disease, especially during a pandemic.

RICHMOND, Va. -- A Richmond company has developed technology that it says could revolutionize the way that medical professionals test for and diagnose infectious disease, especially during a pandemic.

“There is no doubt technology like this can benefit every healthcare system in the world,” said, Thermal Gradient’s Chief Technology officer Bob Juncosa.

Thermal Gradient has spent years developing compact prototype instruments that are designed to do rapid molecular testing.
PCR, or polymerase chain reaction, is the method many labs are using to test for COVID-19 and other diagnostics.

“There’s always been a problem with DNA and RNA testing,” said, Juncosa. "That’s to do a process called PCR which is a very essential step. To do it fast and to do it simple, that’s what got me started in thinking about ways to do that.”

PCR is used to make millions of copies of a DNA sample and amplifies it through a multi-cycle heating and cooling process until it’s large enough to detect.

“So all of the other material is gone now you have a needle in haystack problem because in that sample is all of the DNA that makes up who you are. Now you have to go through this PCR process so you put more reagents in and you cycle the temperature and every time you cycle that temperature if the thing you're looking for, if any of them are there they'll multiply. So, instead of getting rid of the hay you make more needles. So, as you make needles in 20, 30, 40 cycles they now become large enough where they’re detectable,” said Juncosa.

“This is the key, is that the Thermal Gradient technology is all about doing this PCR technology extremely fast. A typical test like this would take one to three hours and we can do this test in under 20 minutes,” said Juncosa.

When asked how the testing takes place so quickly, Juncosa explained that the secret is in the Thermal Gradient technology.

“That's the secret sauce, so in a typical reaction it's all about thermal temperature in the typical reaction that requires this PCR step you have to raise and lower the temperature of the device and the sample over and over again 20, 30, 40 maybe even 50 times, said Juncosa. “You typically do that with a little tube and a plate and it takes time it takes anywhere from 30 seconds to a minute to get this plate up to temperature and then back down again and when you do that 30, 40 times you're now talking about 30, 40 minutes, one hour, two hours depending on how many cycles you need to do.”

“Our device doesn't do that,” said Juncosa. “It is sandwiched between two heat sources that don't change temperatures and we just move the sample back-and-forth which happens in less than a second.”

“It's like heating and cooling a paperclip compared to heating and cooling a wrought iron pan,” said WakeMed pathologist Dr. Michael Weinstein. “I saw the demo, I talked to them about the science and the technology of it. I was extremely impressed. It was a rare combination of a very clever idea. It's also very simple and I think it has great potential to help people. Not only is it inexpensive, and if you need to test millions of people for COVID for example, that really matters. It's also faster,” he added.

While Weinstein is on Thermal Gradient’s advisory board, he said he accepts no money from the company.

“I offered advice on what would be required to validate each test on the Thermal Gradient platform. I also have given advice on how it might be used in doctors’ offices and what the user interfaces might have to be,” said Weinstein.

Weinstein referred to this technology as a ‘brilliant innovation’ that could be a game changer.

“It is possible that these instruments could be made simple enough for the user, and relatively inexpensive for the instrument as well, not just a cartridge, that they could be in doctors’ offices and it would have a huge impact,” said Weinstein.

“What would happen is in the field or remote location or clinic or virtually anywhere you would take a throat swab and you would put that into a kit. You would put the sample in here and you’d open up this door this would be inserted like a credit card or cassette you close the door and you press the button and you end up with an answer in less than 20 minutes,” said Juncosa.

Juncosa said that patients would leave their doctor’s offices knowing whether they were infected.

“With systems like these you can have access to that person in 15 minutes. You can hang onto them for 15 minutes and can treat them or isolate them or go to the next step,” he added. “This is an inexpensive process and how you prevent the spread of the disease because you have rapid access to testing. Anyone who does test positive they're quarantined or treated immediately and that keeps that curve low."

The technology is not limited to infectious disease it can test anything that has DNA.

The company has done upwards of 43 different tests. It’s applicable to cancer detection, biodefense, forensics, agriculture and food and water testing to name some of them.

Thermal Gradient, which has the support of the National Institutes of Health and the Department of Homeland Security says with the right financial partners and support they could have the instrument ready for commercialization in as soon as six months.

“We don't have the capacity to get it out in the field. We don’t have the selling organization it takes. Things as simple as pure cash and it also takes the right kind of diagnostic partner that has an infrastructure already in place,” said Juncosa.

Juncosa said they are actively pursuing collaboration, licensing and other strategic opportunities.