Mom says son was intentionally burned at hospital: 'How could someone hurt my child?' 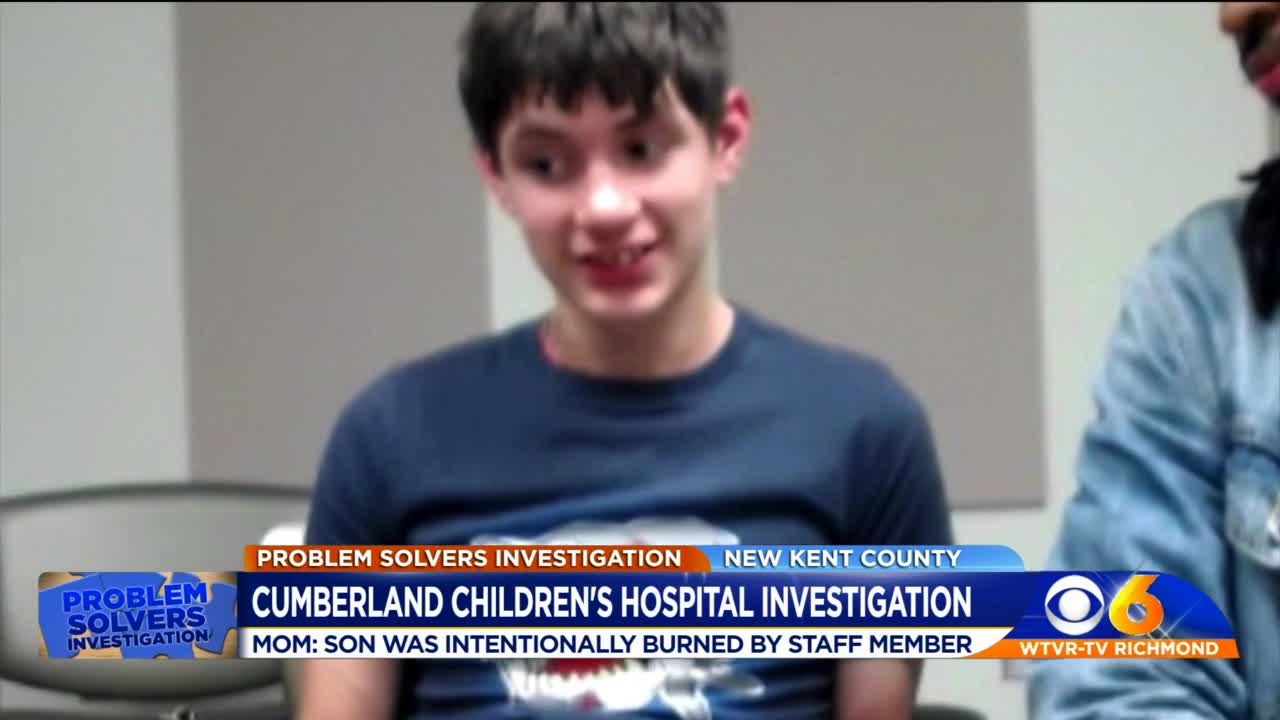 Mom says son was intentionally burned at children's hospital: 'How could someone hurt my child?'

A Tennessee mom said a staff member at Cumberland Hospital for Children and Adolescents intentionally burned her disabled son.

Shannon Haddon said her son Jackson was referred to Cumberland Hospital by Children’s Hospital at Vanderbilt in Nashville, Tennessee.

“They mentioned the word Cumberland. They said this would be a great place for Jackson to go to. It’s out in Virginia. It’s about the only hospital that will take Jackson because he is medically complex and he has behaviors,” Haddon said. “Jackson, unfortunately, was the victim of child abuse when he was an infant. A guy I was with hurt Jackson on purpose."

At the age of one, police said Jackson suffered a serious brain injury after he was ‘thrown, with his head striking a table and the floor’ because he would not stop crying.

“They only gave Jackson a 20 percent chance to live because he suffered a traumatic brain injury to the right side and he had two frontal lobe strokes as well,” Haddon said. “His age mentality is maybe a two to five-year-old. His cognitive level is pretty poor.”

The now 16-year-old has been in and out of hospitals his entire life as a result of his traumatic brain injury, cerebral palsy, epilepsy, and a developmental delay.

On June 20, 2019, Jackson was transported by ambulance more than 600 miles from Nashville to the children's hospital in New Kent County.

“My first impression was very strange. It’s definitely not set up for medically complex kids at all,” said Haddon. “I did not feel comfortable. I will be honest, leaving him there... it was very hard."

But Haddon did go, thinking she was doing the right thing.

But about three months later, just when she was getting comfortable with her son being away from her, she received a concerning phone call.

“Jackson was apparently breaking out with a rash and they had to give him a shot of prednisone and some cream to help with the rash. They thought one of his medicines was going against him,” said Haddon.

CBS 6 has obtained Jackson`'s medical records from that September 14 evening which document the call at 10:43 p.m. and also an encounter 30 minutes earlier.

The record states that staff approached a nurse asking ‘can I have some cream?' When asked what the cream was for, staff stated 'he has a red area on his chest.' It goes on to explain the nurse assessed Jackson noting a 'large reddened area to the right side of his neck and chest. Area noted to have several fluid-filled blisters ranging in size.’

The RN goes on to document, ‘patient was guarded with teary eyes and would not let the area be touched or further assessed. Face scale pain 10/10.’

Two days later, Haddon said the story changed from a rash to a burn.

“She said well Jackson was burned in the shower and he suffered second and third-degree burns,” Haddon said.“At this point, I’m like, 'I want to see my kid.'"

“I said, ‘this is what was told to me, can I see pictures of my son’s burns?’ As a mother, I think I should have that right to see how bad it looks and Miss Hobbs was like we’re doing an internal investigation you’re not allowed to see those pictures but you can do a Zoom call with him tomorrow.”

Haddon provided CBS 6 with a screenshot of that Zoom call which she said showed the discoloration of Jackson`'s burned skin above his t-shirt.

She said that’s all she’d see of it. However, it would be documented extensively in Jackson’s medical records the following day as a second-degree burn with pink popped blisters seeping fluid.

Around 48 hours after that, it was noted that Jackson was withdrawn and may be in pain from the burn on his chest.

His records continue to reference his second-degree scald burn.

“At that point, when they told you you could not see your child’s injuries, in this case burns, did that set off any red flags?” asked CBS 6 investigative reporter Laura French.

“It did. It did. It made me wonder what else may be going on. It didn’t make a lot of sense,” Haddon replied.

However, a month later Haddon said things started making sense when she received another call, this time from Cumberland`'s Director of Risk Management Matt Wiggins.

The communication provided to CBS 6 showed Wiggins wanted to talk to Shannon about "the incident" and provide an "update."

“The conversation first started I was like, 'yes, this is what I was told happened. I was told he was burned in the shower the alarms had failed,' and he kind of stopped me and said, 'unfortunately, that’s not what happened.' My heart just sank to my stomach,” explained Haddon. “He’s like we have on video one of our Behavior Techs going into the break room heating up water and pouring it on Jackson intentionally. Going back from the break room into the bathroom numerous times. It wasn’t once, it was numerous times. Right then and there, I just broke down crying like how could someone hurt my child that way? He’s there to get help,” said Haddon.

Haddon said Cumberland advised her that the Behavior Tech was terminated and the case was turned over to the Virginia State Police.

CBS 6 reached out to Cumberland Hospital for comment on the alleged incident involving Jackson Haddon.

"I can confirm that the issue was promptly and thoroughly investigated, reported to authorities, and the employee was terminated,” Cumberland Hospital CEO Garrett Hamilton said.

Under the Freedom of Information Act, state police confirmed to CBS 6 it has been investigating accusations of criminal child abuse and neglect of patients at the hospital since October 17, 2017, but declined to release specifics on Jackson`'s case or any others connected to the ongoing investigation.

CBS 6 has uncovered multiple allegations of abuse and neglect since investigating the facility last year.

Since our first report in February, one of the hospital’s therapists has been indicted on sex charges and the longtime medical director has stepped down.

The New Kent Department of Social Services also investigated Jackson Haddon’s case, but in a letter dated December 16, 2019, it informed Haddon that the investigation determined a review of the facts did not show a preponderance of evidence that abuse or neglect had occurred and the report was unfounded.

However, it pointed out that may not mean that abuse or neglect did not occur.

“Unfortunately, individual cases involving allegations of abuse and neglect are required to be kept confidential pursuant to Virginia Code Section 63.2-104 and I am prohibited from disclosing any information related to them,” said New Kent Department Of Social Services Director Jon Martz.

“If I did that to my child I would’ve already been in jail,” said Haddon. “I would have been arrested a long time ago, so I would like to see justice for my son.”

Justice, Haddon fought for when Jackson was a helpless infant and is seeking once again 15 years later.

“My son is disabled. He can't fend for himself. He probably didn’t understand why he got burned, why this woman did this to him, she was supposed to be there to help,” Haddon said through tears. “What was the purpose of her burning my child? She may never tell me. I may never know.”

Haddon had Jackson discharged from Cumberland in November 2019. She said she’s confident investigators are still actively working on her son’s case and that justice will be served.