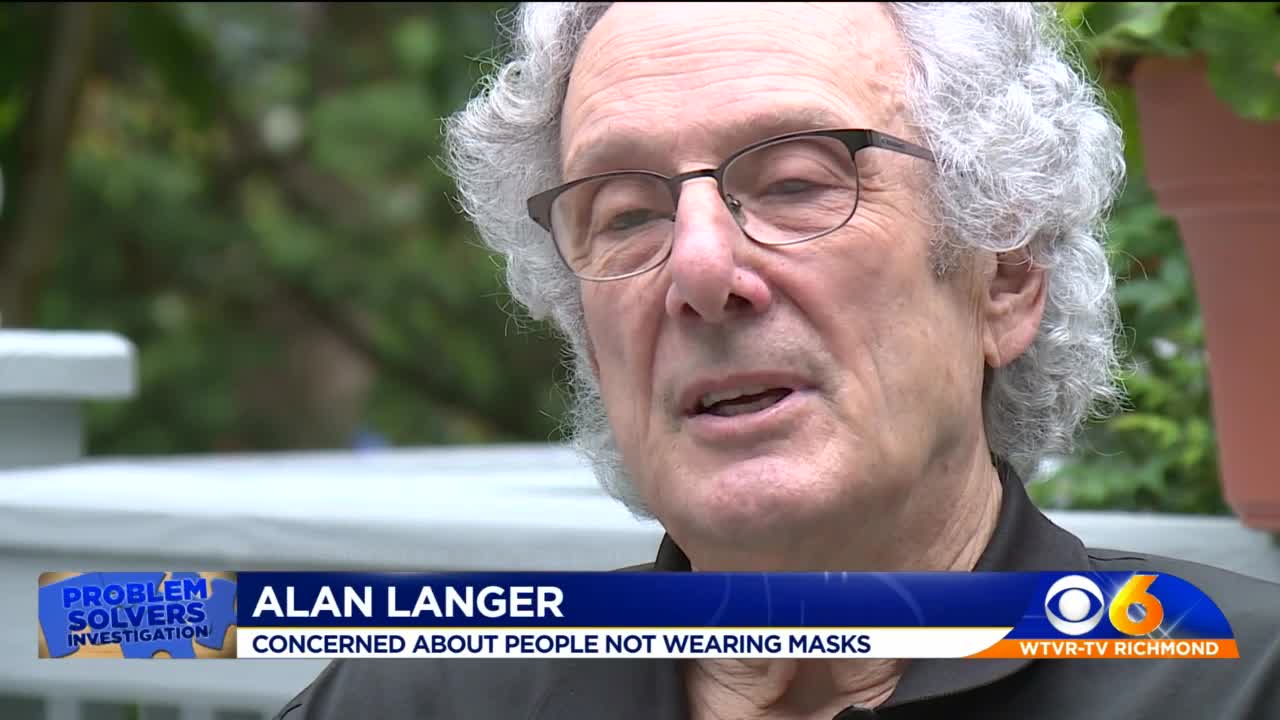 The state's hotline has received 755 complaints related to COVID-19 mask violations since May 29.

UPDATE: More than 4,800 people have contacted the Virginia Department of Health with complaints related to facial coverings since Governor Ralph Northam mandated mask-wearing on May 29th.

Between May 29th and July 3rd, the VDH reports 4,810 mask related complaints were received. Nearly one quarter of those involve grocery/convenience stores, with restaurants close behind at 20 percent, and brick and mortar establishments at 15 percent.

The number is way up from when we CBS 6 reported on this story on June 16th. At that time, VDH had received 755 mask related complaints.

RICHMOND. Va. -- At 72 years of age, Alan Langer knows he's at higher risk for severe illness if he contracts COVID-19.

Since the beginning of the pandemic, Langer and his wife have only left the house to go to the grocery store or doctor's appointments. Last Friday, he decided to venture out for lunch.

"Just test the waters, put my feet in, see what the situation was like," Langer said.

But when he arrived at the restaurant, Langer said he was taken aback to find the person taking his order and preparing his food not wearing a mask and only wearing one glove.

"I was a bit concerned because I didn't really think that was enough precautions to protect his customers," Langer said.

So, he called the Virginia Department of Health's COVID-19 hotline to find out more about the state's guidelines and report what he saw.

"I'm sort of curious how they're monitoring this and what they're going to do about it," Langer said.

To that point, the VDH COVID-19 hotline has received 755 complaints related to COVID-19 mask violations since May 29.

Roughly one-third of those complaints, according to VDH spokesperson, involve food and beverage establishments not following mask rules.

"It's totally reasonable for somebody to be concerned if somebody is not complying with the Governor's orders," Dr. Danny Avula, the head of the Richmond and Henrico Health Districts, said.

"They are getting complaints on a regular basis from patrons that go to a restaurant and see somebody not wearing a mask and want to report them," Avula said.

He said cooks and dishwashers in the back don't have to wear a mask, but everybody interacting with customers needs to be wearing one.

Avula said if a complaint comes in, his inspectors typically call the restaurant first and, if the issue isn't fixed, they make a visit.

VDH provided this reply Wednesday morning related to complaints and how they are being handled:

Given the exceptions in Executive Order 63 and the severity of the punishment associated with violation of the orders, the VDH seeks first to educate, assist, and inform individuals about the dangers of COVID-19 before any enforcement action is contemplated. VDH remains very concerned about the public health impact of the violation of these orders, especially to vulnerable populations like those suffering from underlying medical concerns, and has developed an online tool [vdh.virginia.gov] to make the reporting of violations easier for members of the public. If education and information are insufficient to address violations and violations become pervasive or severe, VDH will enforce the strictures of the orders as agency resources allow."

And while Avula said the majority of restaurants want to do the right thing to protect their customers and staff, Langer said his bad experience has him cutting out restaurants for now.

"Quite frankly, I am not going out to another restaurant for quite some time, I don't want to take the risk," Langer said.

If you see a business, or customers not complying with mask requirements, you have a couple of options.

If the complaint involves a restaurant's staff, call your local health department.