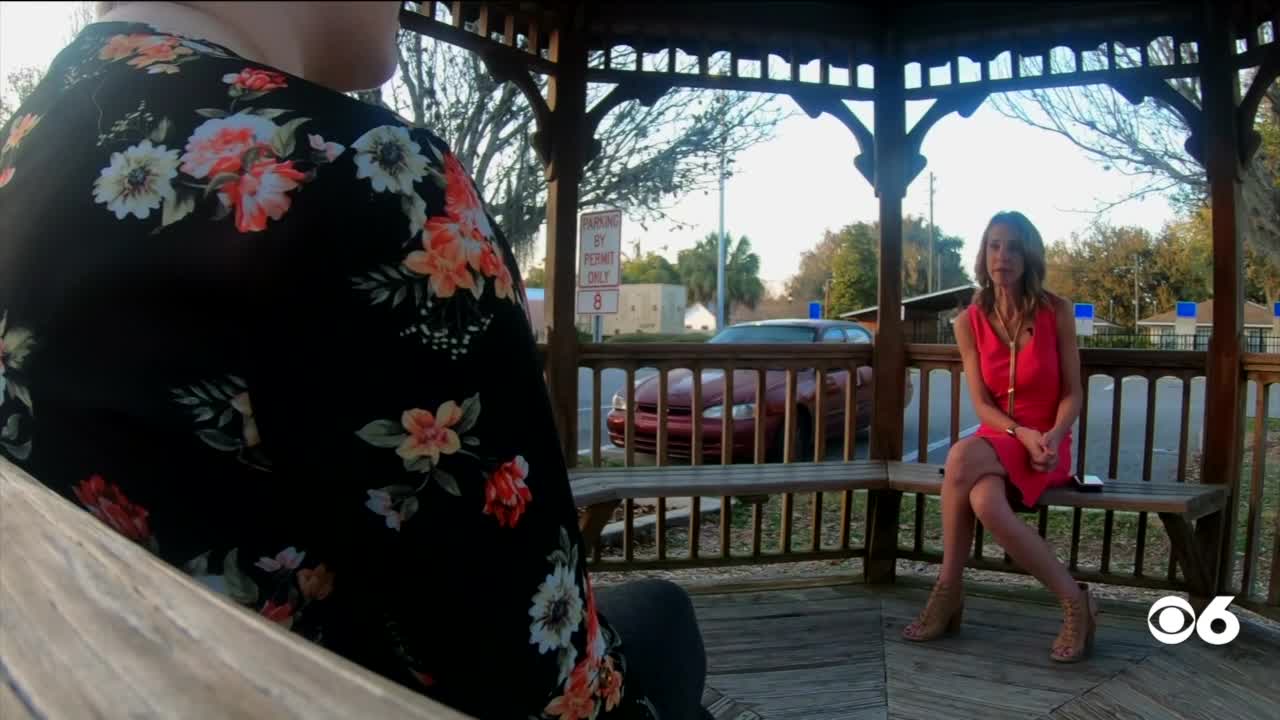 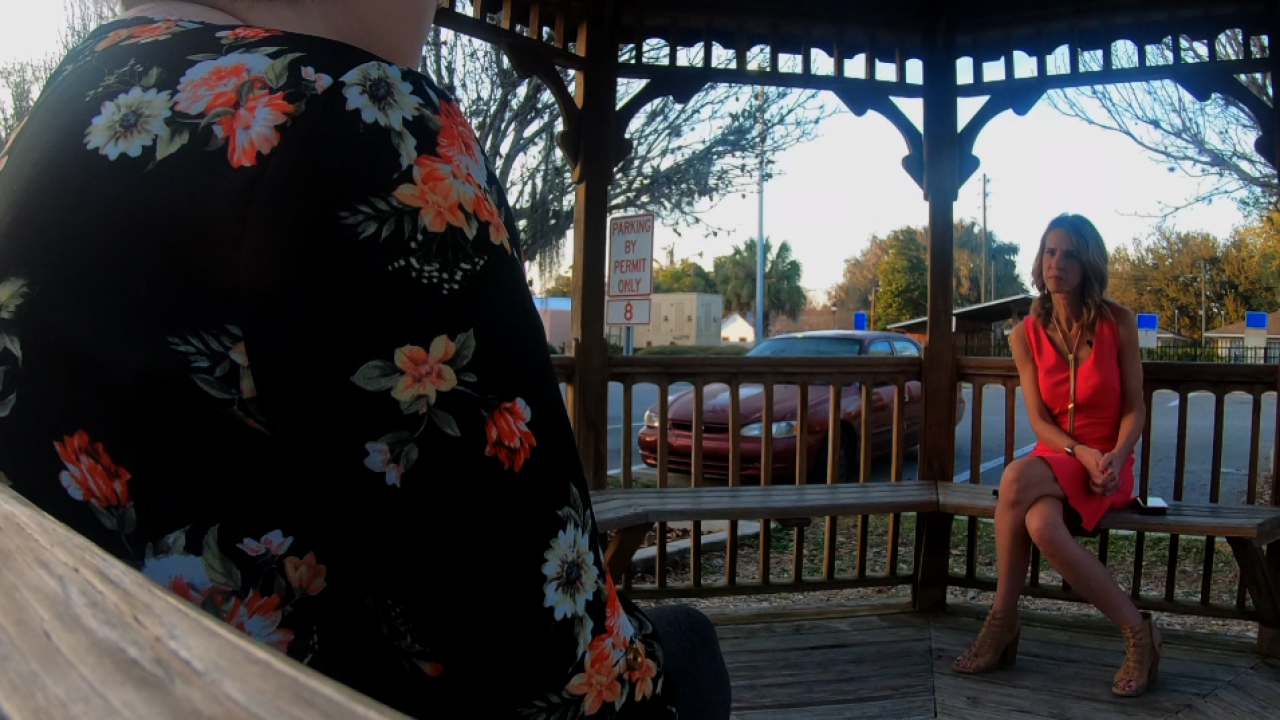 The 20-year-old Florida girl is one of 20 former patients listed in a $127 million lawsuit that was filed October 21. The law firm Breit Cantor filed the complaint against Dr. Daniel Davidow, the New Kent county facility, its parent company Universal Health Services and Herschel “Mickey” Harden, a former psychotherapist indicted in February on charges he sexually abused a former female patient. The complaint alleges sexual and physical abuse against patients and fraud.

CBS 6 traveled to Inverness, Florida and met KMJ as she’s listed in the lawsuit, at the Citrus County Courthouse.

“They’re responsible for sending me there.” KMJ said of the courthouse. “I felt very uncomfortable. I did not want to go.”

KMJ suffers from multiple gastrointestinal issues among other health problems.

The week before her 17th birthday she says a custody dispute would ultimately get her admitted to Cumberland Hospital four states away.

"The judge didn’t know where to put me so she called Cumberland at a court hearing and said ‘I need to speak to Dr. Davidow now.’ She was talking to him on the phone and she quite literally begged him to take me," KMJ recalled.

She arrived the morning of October 17, 2017, the exact same day the Virginia State Police launched an investigation into allegations of abuse and neglect against certain staff members.

She says she arrived at Cumberland for her admission and got greeted by medical director Davidow.

Shortly after completing her paperwork, it was time for her physical exam.

“He started by lifting up my shirt and said I am looking at your tubes and then very suddenly started touching my breasts. He had me slide down my pants and he grabbed my underwear and pulled them down,” she explained. “I was obviously very tense because it was a very uncomfortable situation and he was like 'just relax, just relax." And he still did not have gloves on, he stuck his fingers inside of me and he claimed he was checking pulses to make sure they were okay."

“He took a lot of innocence I still had as a teenage girl and he took my ability to function normal,” KMJ added.

KMJ and 11 other young women as young as 12 allege they were sexually abused by Davidow.

“Have you ever had a doctor check for your pulse internally?” asked CBS 6 Investigative Reporter Laura French.

But the suit claims it would happen again days later when Davidow asked staff members to transport KMJ, who was bound to her wheelchair, to the examination room.

“He said get up on the table and pull down your pants and I was like why? Why do why need to do that? I don’t have any medical reason you would need to be doing these because this had been probably less then a week since my admission date that he was doing this again,” said KMJ.

“What do you remember about that exam?” asked French.

“He had stuck his fingers inside, I feel like it was definitely longer this time. He didn’t speak much during this exam he was very quiet, but he also did something I have never had done. He was touching other parts,” KMJ replied.

“Dr Davidow provides the justification that the purpose of it is to determine the progression of puberty in some of the patients. Puberty doesn’t change rapidly, week to week,” said attorney Kevin Biniazan. “It’s unfathomable and completely without any real reason that this should happen.”

Davidow’s femoral pulse explanation was given during a May 4, 2017 interview with the New Kent County Sheriff’s Office and Child Protective Services.

“Dr. Davidow explains that during his exams he is rating the patient on the ‘Tanner’ scale which is based on certain developmental characteristics of breasts genitals and pubic hair, which is also why he checks the femoral pulse. While checking the femoral pulse on both sides, he advised he can also feel for the pubic hair development in order for him to scale the patient.”

It’s documented in an April 2017 police report when Davidow was under investigation by the department for inappropriately touching five female patients.

The allegations came out in a group therapy session led by an intern at the hospital when the girls discussed Davidow’s “magical touch” to their intimate parts while checking their pulse.

They advised the graduate student he would also check their pulse under their breasts and play with their hair during the physical twirling it around his finger.

However, their case managers told investigators they did not observe anything they felt was inappropriate during the exams.

But a psychotherapist at the facility informed investigators that he polled a group of female patients and 11 out of 12 patients reported they experienced “the same or similar sexual abuse.”

The case would be ruled unfounded.

“When you allow somebody, who was abusing their power to then get away with it, it only fuels them more knowing that there’s going to be no accountability,” said Biniazan.

In KMJ’s case, the complaint alleges Davidow sexually abused her another six times in the exam room and “on at least two separate and distinct occasions, defendant Davidow sexually penetrated and abused KMJ in her bedroom at Cumberland Hospital.”

“He would touch like my breast or my butt or I’d wake up feeling his breath against my neck or something disgusting like that... and those are the moments I can never get out of my head,” KMJ said.

“For her, as we allege, her sexual abuse is much more graphic much more intimate than others. I think that goes to show what happens when people aren’t held accountable and they feel like they have free reign without any oversight to act as they wish,” said Biniazan.

“Anytime I would hear his voice it was instant panic. He made my skin crawl. No one has ever made me feel the way he does, he did and continues to make me feel,” KMJ said of Davidow.

KMJ says her discharge from Cumberland December 1, 2017 ended the sexual abuse, but the trauma it inflicted she says will last a lifetime.

“I have nightmares frequently,” she said.

“You are a terrible human being,” she said of Davidow. “You destroyed me. You destroyed my family. But I’m okay. I am doing better. I am working through this. The person who is going to be knocked down forever is you.”

“The system failed these children by not giving them a voice by falling through the crack between police officers and departments and different agencies who point the finger somewhere else and there’s no-one to stand up for them,” said Biniazan.

“What would your message be to the people who allegedly looked the other way?” French asked KMJ.

“How do you live with yourself? I would tell them that they, no matter what they tell themselves or other people, they were enabling that. They are guilty for crimes too because you knew what was happening,” KMJ replied.

“What do you want to see happen?” asked French.

“I want to see him locked up and him never to be able to be around, not only a child, but be around no one. Not able to hurt anyone ever again physically, mentally, sexually ever,” KMJ replied.

In a statement, Davidow's attorney, Michael L. Goodman, says his client denies all the allegations against him.

"Dr. Davidow absolutely denies all allegations that he ever sexually assaulted or abused any patient at Cumberland. We are confident that when these matters are tried in court, the evidence will clearly prove that these allegations are completely without merit," said Goodman via email.

CBS 6 also reached to the other defendants in this case for comment and have not heard back.

These are just accusations and must be proven in a court.

Davidow, who currently has an inactive medical license, is not facing any criminal charges.

CBS 6 contacted the Office of the Attorney General and they had no updates on the case at this time. The Virginia State Police says the investigation remains ongoing.