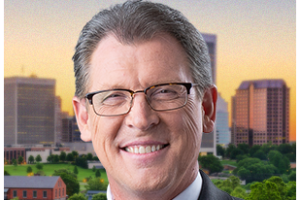 Watch Rob Cardwell weekdays on CBS 6 This Morning from 4:30 to 7 a.m. Catch his Building Better Minds reports Wednesdays on CBS 6 News at 6 a.m. and 6 p.m.

Rob was born in the beautiful city of Tampa, Florida. After graduating from Plant City High School he joined the United States Air Force to pursue his dream of becoming a dentist. But after a couple of years elbow-deep in other people’s mouths, he decided a career change was in order.

In 1990 Rob was accepted for cross-training and became a distinguished graduate of the Armed Forces Defense Information School in Indianapolis, Indiana. The Air Force immediately shipped him to Osan, South Korea where he was the DJ for a morning radio show (Good Morning, Osan!) and produced news reports for the Armed Forces Korea Network television news in the afternoon.

In 1991 Rob was stationed at Tyndall AFB in Panama City, Florida. It was there he left the Air Force and began working for WJHG TV-7 as a reporter and anchor. During his seven years in the Florida panhandle Rob rode out hurricanes, covered local and state politics, crime and anchored both the morning and evening newscasts. He also won individual and station Associated Press recognition. During that time Rob also freelanced for Current Affair, CNN, CBS radio, Live with Geraldo Rivera and was the newsman for a local Talk Radio station.

It was also in Panama City Beach that Rob met and married his beautiful bride Debra. In 2000 they decided to leave the panhandle for the southern charm of Richmond. Rob is now a 7-time Emmy winning reporter and news anchor for CBS 6 This Morning with Reba Hollingsworth, traffic anchor Kristen Luehers, and meteorologist Tom Patton.

Rob is a member of Ironbridge Baptist Church in Chester, Virginia and is involved with a number of annual local events and fund-raisers for state and community organizations. In his spare time he enjoys camping, fishing, hiking, spending time with Debra and his son Jacob…and most importantly…cheering for his hometown Tampa Bay Buccaneers!