Why do Virginia's COVID-19 testing rates remain so low? 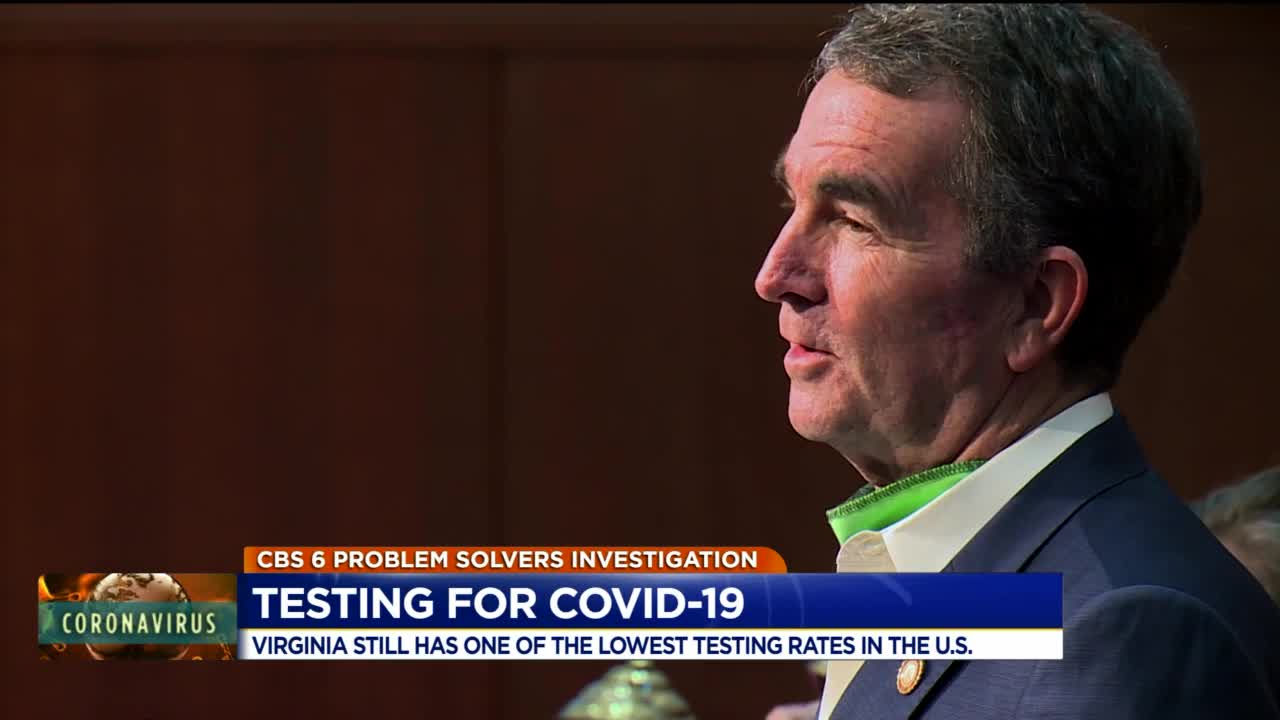 Why do Virginia's COVID-19 testing rates remain so low?

RICHMOND, Va. -- Virginia Governor Ralph Northam declared a state of emergency in response to the coronavirus on March 12. Within two weeks, schools were closed, as were gyms, beauty salons, and restaurant dining rooms.

On March 30, the Governor asked everyone who could, to stay at home.

And now, two months later, Virginia is on the verge of slowly starting to reopen.

The Governor has always said testing would be the key to reopening. He ultimately set a goal of 10,000 tests per day.

On April 20, he announced that former state health commissioner Dr. Karen Remley would be leading a task force to ramp up testing.

But, weeks later, Virginia continues to lag behind just about every other state in the country when it comes to the percentage of people tested for COVID-19.

According to the latest data from Johns Hopkins Coronavirus Resource Center, Virginia has the third-lowest testing rate of all 50 states.

A comparison from the Kaiser Family Foundation shows the same.

When asked Monday about the low ranking compared to other states, Governor Northam said "today we're at 9,801 which is 199 tests from 10,000, so I'm very pleased with the progress we're making."

"I make no excuses for Virginia, I think we're in a good place."

He then had Dr. Remley come to the podium where she said "the Johns Hopkins is a cumulative amount of tests, so we will never catch up unless we inappropriately tested everybody in the state, which would not give us information that would help with public health."

The Governor has consistently blamed a lack of supplies from the federal government for testing issues.

Virginia placed an order for 500,000 nasal swabs from the federal government in early March, according to a FOIA request fulfilled by the Virginia Department of Emergency Management (VDEM).

The federal government deemed the request too much and reduced the order.

"We then tried to purchase swabs from a private vendor, we issued a purchase order for 100,000, and then a week later that distributor came back and said they couldn't get the swabs," Dr. Jeff Stern, the head of VDEM, said.

Stern said VDEM has since received supplies from FEMA, and yet, Virginia still has not reached the Governor's goal.

But, by Tuesday, that number had dropped to just under 3,500.

"I'm concerned that Virginia is as low as we appear to be," Senator Mark Warner (D-Virginia) said.

Warner is on the President's task force to re-open the economy.

While he said the federal government deserves some blame for not providing PPE and testing supplies to the states, he has the same questions our viewers have about why the Commonwealth has not done a better job.

"Those are questions I want to get the answers to as well,” Sen. Warner said. “I do wonder at times if we've taken an assessment of all the testing capacity we have in Virginia.”

To that point, we contacted many of the private labs that have testing capabilities on the state's list for doctors, like Aperiomics in Northern Virginia.

"We did reach out to the state and let them know we had testing available as well," Icenhour said.

In fact, Icenhour said Aperiomics currently has 3,000 collection kits just sitting in a warehouse, but she said the state never tried to buy them.

"I don't know, I honestly don't know,” she said when asked why the state never took advantage of her testing kits.

We also asked Icenhour for her thoughts on why Virginia's testing rate has consistently ranked so low.

"I think there just wasn't early and aggressive guidance from the state in order to communicate to the health care providers.... there hasn't been a consistent voice and consistent guidance helping the health care providers understand who they should trust as far as testing goes, who they should go to, who should be tested, that, I think, has really been a big part of the delays," Icenhour said.

Dr. Karen Remley said the Aperiomics tests cost significantly more than some of the other tests on the market, so the state opted to contract with other private labs to improve testing supplies.

Governor Northam said some new public-private partnerships will be announced soon that will further ramp up capacity.

"We will be making announcements about having testing not only where people can walk up and have the test, but also drive through testing as well," Northam said Monday.

Some states enlisted their universities to use 3D printing to make supplies like nasal swabs, and while the University of Virginia and Virginia Tech are working to do that, they aren't doing it yet.

State officials now say they have sufficient funds and supplies to do testing, but they will need to hire hundreds more contract tracers.