Protesters call on the governor to halt evictions amid COVID pandemic 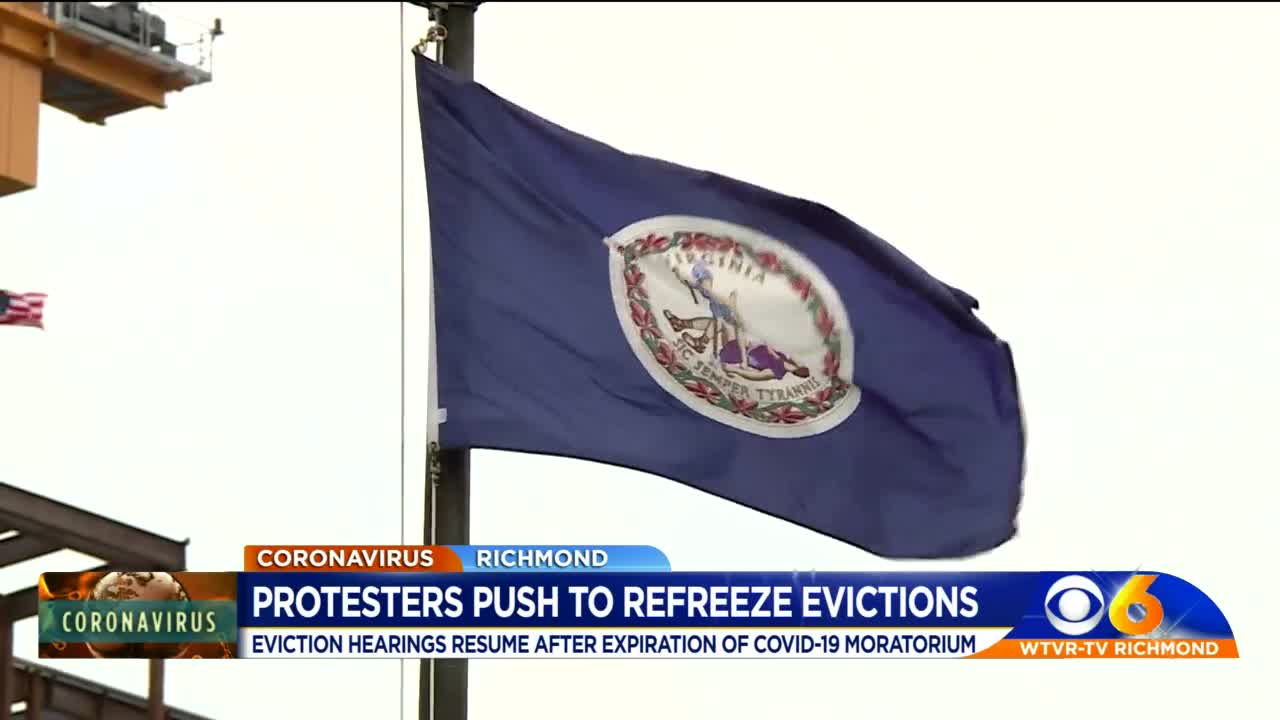 Protesters call on evictions to stop

RICHMOND, Va. -- Over 100 people protested outside the John Marshall Courthouse in Richmond on Thursday in opposition to the resumption of eviction hearings after a statewide moratorium on them expired last week.

“We want to keep up the pressure on these evictions. Eviction is violence. Eviction is deeply tied to all of the other issues that people have been protesting for the last month-and-a-half,” said Bennett, one of the people who gave a speech at the protest. “People have lost work for months because of COVID, because they cannot go into their jobs. People have not been able to pay their rent or pay their bills. It is inhumane to evict people during a global health crisis.”

Eviction hearings, and many other court proceedings, were halted in March by the Supreme Court of Virginia in response to COVID-19.

They resumed in May

On June 8, Chief Judge Donald W. Lemons granted Virginia Governor Ralph Northam’s request for an eviction moratorium to give the “Commonwealth time to implement its comprehensive rent relief program and to help relieve the public health risk associated with evicting Virginians from their places of residence.”

That order expired on June 28 and eviction hearings were allowed to resume on June 29.

Protesters also called out several Richmond landlords they said were conducting mass evictions against tenants since the hearings were allowed to resume. Organizers from the Richmond Tenants Union (RTU) said they had been out notifying people facing eviction and said many were unaware.

“Many of the landlords were not alerting their tenants that they have upcoming evictions…when tenants don’t know they have a court case, they don’t know to show up, and that gives an automatic win to the landlord," Stephen Axeman, with RTU, said. “We can build a passionate and democratic system that is fundamentally concerned with righting exploitation and historical injustice. But, first, we have to come together with our neighbors and get organized in every building, on every block, and in every neighborhood. When we come together we have the collective power to improve our lives and build a better world.”

Those at the protest said people have also been outside the courthouse since evictions resumed offering support to those facing eviction.

“Some folks have been out every day for a couple of hours in the morning when eviction cases are being heard,” said Hannah, another one of the speakers. “Just concerned community members sitting over here in the outside area with snacks, water, some information from the Virginia Poverty Law Center and a resource sheet that’s been created by community members offering support for folks that need help paying their rent, folks that need help because they’ve lost income.”

At the statewide level, Steve Fischbach, Litigation Director at the Virginia Poverty Law Center, said there are around 11,000 eviction cases scheduled over the next eight weeks.

“So, we’re very concerned about that. We don’t think anyone should be evicted during this pandemic. We have also written to the Governor and asked him to declare an eviction moratorium,” said Fischbach. “Because that’s necessary right now.”

Fischbach added he feared if there is no statewide eviction moratorium the situation will only worsen when a federal moratorium expires July 25, along with the expiration of the additional $600 for unemployment claims on July 31.

CBS 6 reached out to Governor Northam’s office for comment on the call to use his executive power to reimpose such a moratorium and his spokesperson wrote back, “An executive order would likely raise legal complexities that would tie the case up in court and keep much-needed relief from Virginians.”

CBS 6 also asked how many people have benefited from the Virginia Rent and Mortgage Relief Program.

A spokesperson for DHCD said that through Thursday, July 3 there had been over 45,000 hits to the program’s eligibility portal, where people check to see if they qualify for assistance, and added other Virginians have heard “directly through local outreach of the organizations administering the program locally/regionally or through calling 2-1-1.”

They added they will have a full reporting update from their “network of grantees” by the end of business on July 10 and that will be made available on July 13.

The City of Richmond is also using $6-million of its CARES Act funding to go towards the Eviction Diversion Program and rental assistance.

City officials tell CBS 6 they have not received statistics for how many households have been helped since evictions resumed. They added that none of the $6-million has been used yet and they are finalizing a contract with HOME of Virginia and ACTS.

They added HOME of Virginia is currently using the balance of their city funding, plus some private funding, and are focused on assisting households that received an unlawful detainer prior to April 1 as CARES Act funding does not cover cases prior to the pandemic.