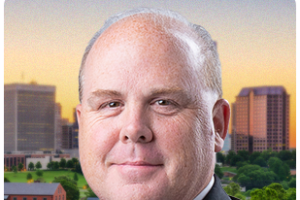 Lane joined WTVR as a news photographer in 1994. He spent three years as weekend sports anchor before becoming the sports director in May 1998.

His Beyond The Roster reports, profiling the stories behind the scores in Central Virginia, air every Thursday night on the CBS 6 News at 11. He has also anchored nearly every episode of Final Score Friday, WTVR’s award winning high school football show which celebrated its 250th episode in 2017.

Lane’s coverage includes the Washington Redskins, UVA, Virginia Tech, Richmond, VCU, NASCAR and just about everything else in Central Virginia.

He has been honored with an Emmy Award, 4 Virginia Association of Broadcasting awards and three Edward R. Murrow awards for his reporting and anchoring.

He has been named Virginia Sportscaster of the year 3 times, and been honored by Richmond Magazine as their readers’ favorite local sportscaster 6 times.

Lane is one of the voters for the Dudley Award, handed out to Virginia’s best college football player. He is also on the voting panel for the John Wooden Award, given to the player of the year in college basketball. He is also a former member of the Atlantic Coast Sports Media Association, which hands out All-ACC honors each year.

Originally from upstate NY, Lane graduated from Plattsburgh St University and worked as a sports anchor and photographer at WUTR in Utica, NY before heading south.

He is a die hard (and realistic) NY Yankees and Pittsburgh Steelers fan. He enjoys running and golf and is married to former CBS 6 anchor Deborah Cox. They have two children, Connor and Mary Catherine.