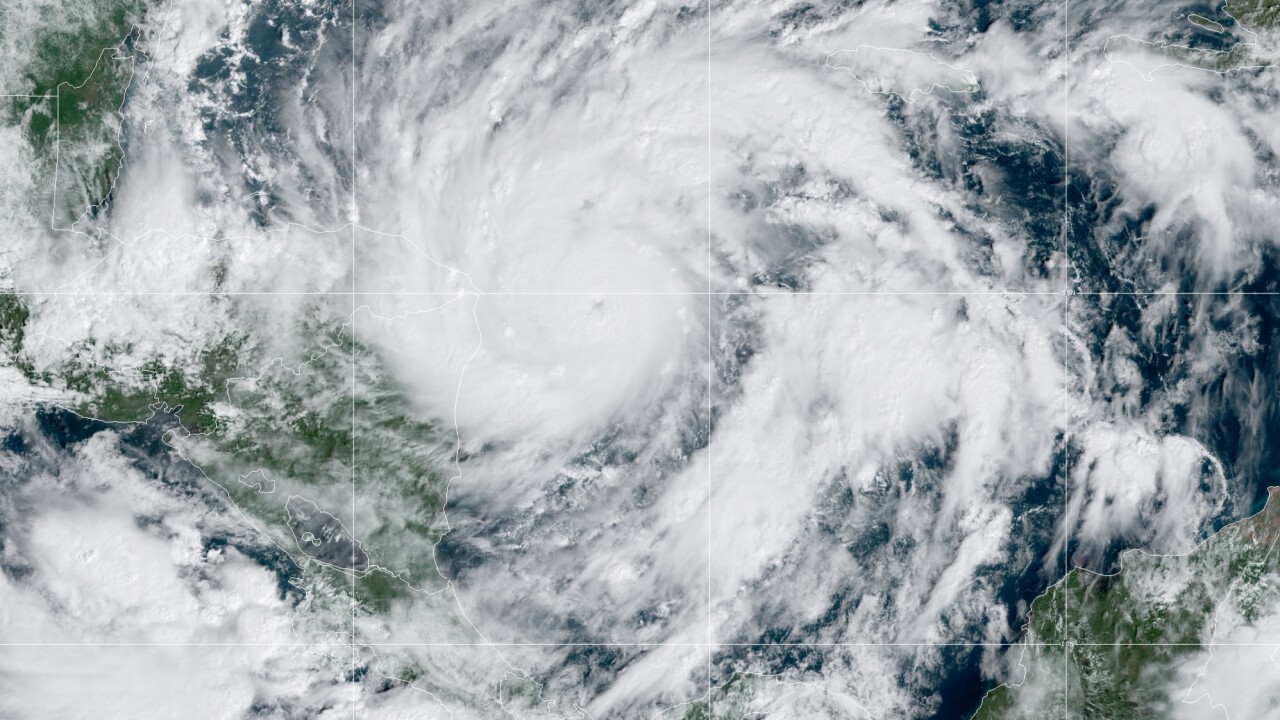 AP
This GeoColor satellite image taken Monday, Nov. 2, 2020, at 1 p.m. EDT, and provided by NOAA, shows Hurricane Eta in the Gulf of Mexico approaching the border of Honduras and Nicaragua. New Hurricane Eta quickly gained force Monday as it headed for Central America on the verge of becoming a major hurricane, threatening massive flooding and landslides across a vulnerable region. (NOAA via AP)

MANAGUA, Nicaragua (AP) — Hurricane Eta is quickly gaining force as it heads for Central America, threatening massive flooding and landslides across a vulnerable region. The National Hurricane Center says the storm has 150 mph sustained winds, as of Monday evening, and is gaining speed as it approaches land. The hurricane was just 6 mph shy of category 5 strength.

Eta is expected to hit along the Nicaragua-Honduras border, with landfall coming sometime on Tuesday. The rainfall is expected to be heavy, it could be three feet in some places. The storm surge is predicted to get as high as 12-18 feet above normal tide.

"Through Friday evening, heavy rainfall from Eta will likely lead to catastrophic, life-threatening flash flooding and river flooding across portions of Central America, along with landslides in areas of higher terrain. Flash and river flooding is also possible across Jamaica, southeast Mexico, El Salvador, southern Haiti and the Cayman Islands," according to the advisory from the NHC.

Visualization from GOES East of Hurricane Eta on the verge of becoming a major hurricane after rapidly strengthening overnight and this morning.
Catastrophic wind damage, storm surge and flooding is expected where Eta's eyewall moves onshore. pic.twitter.com/YOitE6fXuB

Eta is the 28th named storm in the Atlantic in 2020, this ties the record for most tracked storms in a year. However, this is the first time the name Hurricane Eta is being used, and only the second time the Greek alphabet has been needed once the list of names has been exhausted.

In 2005, the name Hurricane Eta was never used during the season. There was a storm formally added to the list of named storms in a post-season analysis by National Hurricane Center scientists. While only 27 "names" were used in 2005, there were technically 28 different storms identified and tracked by the NHC that year.

The last storm of 2005 formed in late December, and did not make landfall.