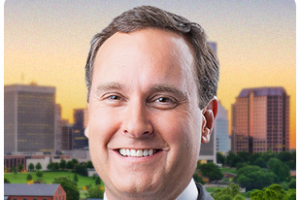 Zach Daniel is the Emmy Award-winning Chief Meteorologist for WTVR. His weathercasts can be seen weeknights on CBS 6 at 5, 5:30, 6, and 11. Zach grew up in Atlanta, Georgia and has had a keen interest in weather since his early childhood.

He’s no stranger to severe and unusual weather, having spent six years working in Oklahoma City, widely regarded as the most intense weather market in the nation.

He loves the challenge of forecasting the weather in Virginia and creating a weathercast that’s accurate, compelling, and useful for his viewers each and every day.

He is a member of the National Weather Association and the American Meteorological Society, and has been awarded the AMS Seal of Approval.

Zach and his wife, daughter, two sons, yellow lab Walter, and black lab Stanley live in Richmond’s West End. When he’s not working he loves running, playing golf, skiing, traveling, spending time with his family, and serving as a board member for the American Cancer Society.

Zach works as a forensic meteorologist and has served as an expert witness generating forensic weather reports for numerous cases involving weather in the Mid-Atlantic. To contact Zach regarding a court case, email him at theawfgroup@hotmail.com. He loves hearing from viewers and invites you to drop him a line.