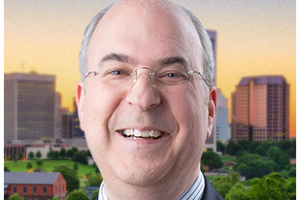 Mike Goldberg has over 20 years experience forecasting central Virginia’s weather. You can currently watch him on CBS 6 Saturday and Sunday evenings.

Mike has presented forecasts across the state of Virginia, having worked not only in Richmond, but also at WAVY-TV 10/Fox 43 in Hampton Roads and WSET-ABC 13 in Lynchburg. He has served as Chief Meteorologist for television stations in Rochester, NY and Binghamton, NY, as well as WTVR from 1998-2007. He’s also made several appearances as a Guest Meteorologist on The Weather Channel.

Mike is a member of both the American Meteorological Society and the National Weather Association, recognized by the AMS as a Certified Broadcast Meteorologist (CBM) and a holder of the NWA’s Television Seal of Approval. He was presented the NWA’s 2018 Member of the Year Award and has served in various positions on the organization’s Broadcast Meteorology Committee for over 20 years.

Mike is always out in the community, promoting science education in the schools and presenting talks to various groups of all ages. He has served as a judge for the Virginia Science and Engineering Fair and the Metro Richmond Science Fair, and has been the Master of Ceremonies for various events held by the Multiple Sclerosis Society, Arthritis Foundation, American Diabetes Association, Commonwealth Catholic Charities, Richmond Vegetarian Society, Richmond SPCA, Richmond Animal League and Cat Adoption and Rescue Efforts.

Aside from weather, Mike holds a Bachelor of Music degree in Clarinet Performance from the world-renowned Eastman School of Music in Rochester, and remains active as a professional musician and teacher. He currently serves as a Classical Music Host and the Coordinator of Classical Music Initiatives for VPM Music, 93.1 and 107.3 FM in Richmond.

Highlights of his musical career include performing with the original Broadway production of “Into the Woods” and touring the major concert halls of the Northeastern U.S. and Canada with trumpeter Wynton Marsalis and the Eastman Wind Ensemble. He has also recorded for CBS Masterworks. Mike is the founder and Artistic Director for Crescendo, a professional chamber music ensemble, and has performed with the Richmond Symphony, Williamsburg Choral Guild Orchestra, University of Richmond Orchestra, Richmond Philharmonic Orchestra, Commonwealth Winds, Richmond Symphonic Winds, and the Richmond Chamber Players. Also an accomplished conductor, he is the Music Director of the Central Virginia Wind Symphony, a group of the most talented high school musicians in the region. Mike was appointed Adjunct Instructor of Clarinet at Randolph-Macon College in 2011, and maintains a private clarinet studio while serving on the band faculty at Colonial Forge (Stafford County) High School.

An avid animal lover, Mike is dedicated to helping local animal adoption and welfare groups, and hosts the Paws for Pets segments on CBS 6 every weekend morning. He has served on the Board of Directors for the Henrico Humane Society and has received a Guardian Angel Award from Save Our Shelters for outstanding contribution to animal welfare in Virginia.