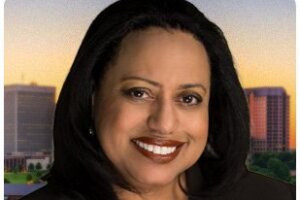 Cheryl has been an Anchor/Reporter with the CBS 6 News team since September 1984.

In April 2015, Cheryl was inducted into the Virginia Communications Hall of Fame and in June 2016 honored with the Virginia Association of Broadcasters (VAB) Distinguished Broadcaster Award

Since 2003, Cheryl has enjoyed challenging area students as Host of “Battle of the Brains”, Central Virginia’s longest-running high school academic quiz show, which airs Saturdays at 10 a.m. on CBS 6 and 11a.m. on WTKR-News 3 Norfolk.

With over four decades of broadcast experience, Cheryl has previously shared her knowledge of television and radio as an Adjunct Professor at Reynolds Community College in Richmond.

She spends many nights and weekends hosting or speaking at community events and making other personal appearances. One of the fun highlights of her CBS 6 career was a role (2004) on CBS’s longest-running daytime drama, “Guiding Light”, while taking viewers behind the scenes.

Before coming to WTVR, Cheryl worked as a TV news Anchor/Reporter in Binghamton, New York , and a freelance “Lifestyles” reporter in Rochester, New York. Prior to that, she spent almost nine years as a Disc Jockey and in various positions in radio in her hometown of Rochester.