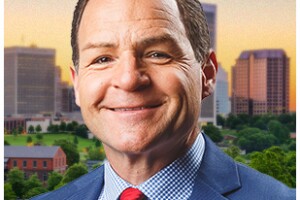 I am living my dream every day I show up for work. I remember watching television newscasts in Boston as a youngster and saying to myself, ‘Now THAT is something I want to do.’ From an early age, I wanted to carve out a career as a television news reporter. Flip through the pages of my high school yearbook and you will find “News Broadcaster” under my career goals. For more than twenty years I’ve had a front row seat to life.

I am juggling many different responsibilities here at WTVR. I produce two weekly franchises “Heroes Among Us” on Thursdays and “I Have a Story” on Fridays and anchor the “CBS6 Weekend Morning” show on Saturdays and Sundays with my colleague and friend, meteorologist Mike Stone.

My roots stretch back to Somerville, MA. I graduated from Bunker Hill Community College in 1989 and Northeastern University in Boston with a degree in broadcasting in 1992. During my college days, I gained as much experience in the field as possible.

In 1991, I landed a position as a disc jockey at KLHI-FM 101 on the Island of Maui, Hawaii. I also spent seven months in Dublin, Ireland and Belfast, Northern Ireland during an exchange program. I worked as a political intern for a representative in the Irish Parliament while studying at the Institute of Public Administration in Dublin and studied at Queen’s University and work as an intern with the BBC’s “Good Morning Ulster” radio program in Belfast.

During my college days in Boston, I paid for tuition by selling popcorn and ice cream at historic Boston Garden during Celtics and Bruins home games. Following graduation, I landed an entry level position as a video archivist at WBZ-TV in Boston. It was such a treat working with many of the folks I admired and grew up watching like the legendary Jack Williams and the intrepid reporter Ted Wayman.

In 1997, I moved to Bangor, Maine for my first full-time on-air reporting job at WVII-TV. The job prepared me well for a career in broadcasting. In a small market like Bangor you work long hours, shoot the pictures, write the story, edit the video and go live all while getting paid very little. But I loved it! It was an experience filled with riches I cannot count. I will always cherish the memories and the life-long friends I made.

One of the highlights during my time in Maine was flying on a National Guard tanker over the Atlantic Ocean during a refueling mission involving eight F-16 fighter jets. I also had an opportunity to play a bit part in the film “Storm of the Century.” Stephen King, who is a Bangor native, wrote and appeared in the movie as well.

In 1998, I returned to Boston to work at NECN as a weekend reporter. I covered a wide range of New England and national stories including the 2000 Democratic National Convention in Los Angeles. One of the most memorable moments during my tenure at NECN was interviewing former Russian leader Mikail Gorbachev and Buzz Aldrin, the second human to walk on the moon. One of the most heart-wrenching stories I ever had to cover was the deaths of six Worcester firefighters who lost their lives in a cold storage facility during a fire in December of 1999.

In October of 2000, I moved to Richmond after landing a job at WTVR as the military/political affairs reporter. I am a huge history buff, so Richmond was the perfect fit. The River City offers plenty of the past from the Revolutionary War to the Civil War to keep me satisfied. During my time here at WTVR I’ve had some remarkable experiences including flying to and sleeping on the U.S.S. George H. W. Bush and U.S.S. Dwight D. Eisenhower in the middle of the Atlantic Ocean. Landing on and then taking off from the aircraft carriers was exhilarating. During the “Sailor for a Day” program I experienced pilot swim survival training including swimming in a flight suit, helmet and boots. I also had to escape a device called The Dunker which simulates a downed helicopter underwater. An exhausting yet thrilling experience.

I also had the opportunity to fly with the Blue Angels and witness countless brave sailors and marines leave for and return from the War on Terror.

I also traveled across the pond to England in the spring of ’05 to explore the historic link between the U.K. and Virginia for the 400th anniversary of Jamestown. One of the most fascinating interviews I conducted during my time spent in England was with Lord Cornwallis, the great-great-great grandson of Lord Cornwallis who surrendered to George Washington in Yorktown, Virginia which ended the Revolutionary War. My reports from that week were transferred to a DVD and placed in a time capsule at Historic Jamestowne. In 2057, the time capsule will be unearthed and opened for the 450th anniversary commemoration.

In 2007, I had the excellent opportunity to return to England and work at the BBC in Kent, England. It was part of an exchange with the BBC South East. One of their reporters switched jobs with me in Richmond. It was one of the highlights of my broadcasting career.

Each week, since 2014, I have had the pleasure of producing a segment called “Heroes Among Us.” I share the stories of people who are making a positive impact on central Virginia. I also produce a weekly segment called “I Have a Story” which features the little-known Virginians with remarkable tales to tell.

I also anchor “CBS6 This Morning” each Saturday and Sunday morning with my friend and colleague meteorologist Mike Stone.

In my spare time I like to travel the world, hunt for Civil War relics with my metal detector on old battlefields.

For the last several years, I’ve been tracking down and interviewing the soldiers who served in the 692nd Tank Destroyer Battalion during WWII. My late grandfather, William McQuade, was captain of ‘A’ Company in the 692nd. I’ve driven and flown to many states across America to meet these aging veterans in their homes and reunions. They’ve been sharing stories that help me get to know the grandfather I never met.

In 2006, I produced an award-winning two-part series on my search called, “Soldier In the Photograph.

Thank you for reading.