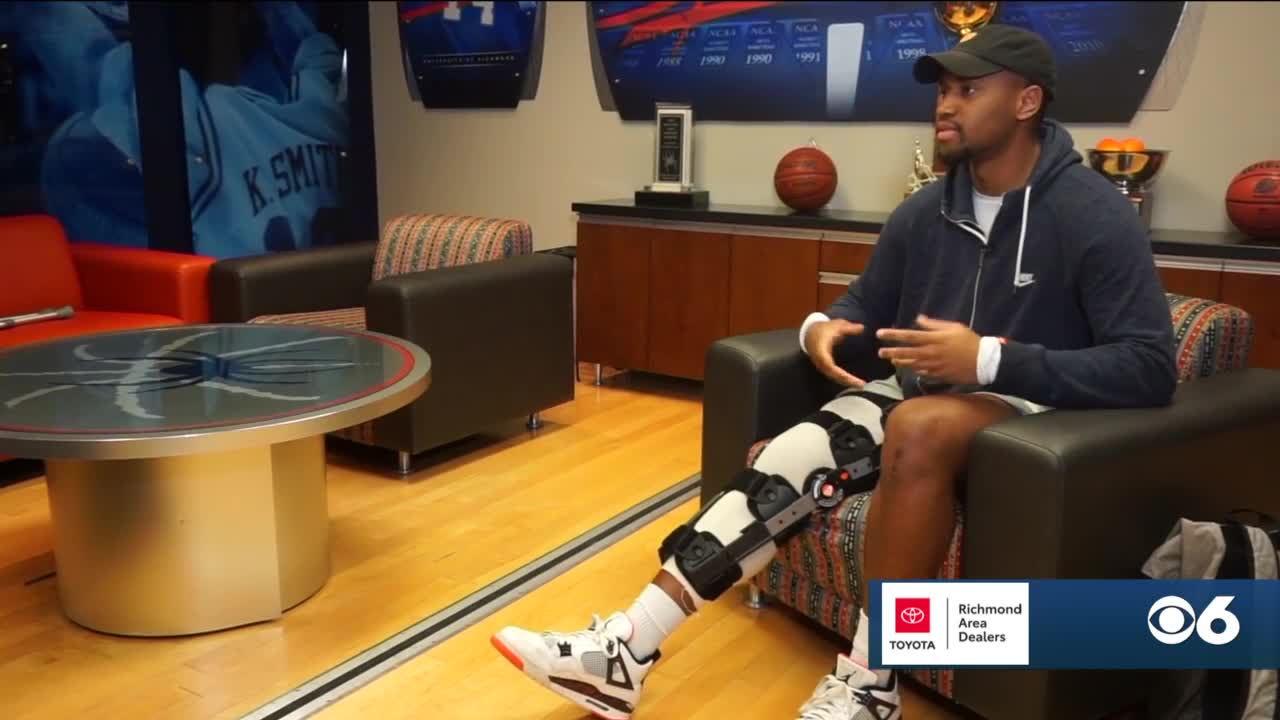 HENRICO COUNTY, Va. -- Back in January, CBS 6 brought you the story of Spiders forward Nick Sherod, who had worked his way back into the starting lineup following an ACL injury the previous year.

But Sherod put in the necessary work, almost a full calendar year's worth to return to the Spiders and lead the A-10 in three point shooting. He was 10th nationally making nearly 44% of his shots from behind the arc as the Spiders went 24-7 and were only held out of the NCAA tournament by a pandemic.

All signs pointed to a very strong year for Sherod and this year's Spider team, that is until the second practice of the season.

“It's probably the worst day I've had here as a coach to be honest with you,” Spiders head coach Chris Mooney admitted. “You could just tell, everyone kind of knew and suspected the worst.”

Sherod, who had never been injured at all before his first knee injury, suffered the same injury in his right knee, ending another season before it ever began.

“Just because you've been through it before, you know what the feeling is,” Sherod said. “You know which way the leg is supposed to twist and what's supposed to do what when you make a move. I knew that was not supposed to happen. And I kinda knew what it was right when it happened.”

Sherod's second knee injury dampens the expectations for the Spiders on the court somewhat this year, but it's his overall presence that will be the bigger loss. A senior with his experience and reliability will be sorely missed by everyone in the program.

“Knowing and counting on him every day both on the court and off the court, it's reassuring to the coaches and the players,” Mooney said. “The younger players might not even know that, but it's very reassuring.”

What it isn't is fair, on any level. Sherod texted his teammates the next morning, encouraging them to finish the task at hand, regardless of the hand he had been dealt.

“I had my woe is me moment on the Thursday that it happened,” Sherod recalled. “I remember screaming out why has this happened again. One of the things my parents always taught me was never let the sun set on your anger. I still felt sad and I was disappointed but I wasn't angry anymore.“

“It's hard to find fair, and this certainly is something that is incredibly unfair and couldn't be more right in front of you mainly because of how hard Nick works and how much he does everything right,” Mooney added.

Because of what he's already gone through in rehabbing from his first injury, Sherod believes he is in a better place mentally to deal with what is again facing him now. But his goal is somewhat different.

While he hasn't closed any doors, he is not likely to return for a 6th season even though it's an option, because he knows what the rest of the roster might be able to do in his absence.

“I don't think they want it to be under this circumstance, but they're going to get their chance to play now,” Sherod explained. “I feel like, on some level, it would be selfish of me to come back for a 6th year. I've gotten to have almost every experience you could have as a college basketball player. I want these guys to have their time. I know what playing means to me, and I want them to have that.”

If last year's final home game against Davidson was his last at the Robins Center as a player, Sherod is grateful for the career he has had.

“You can't stay in college forever,” Sherod said. “I've had a career that I'm proud of. I don't really have a lot of regrets.”

“I would want Nick Sherod in the program for the next 50 years,” Mooney admitted. “I would assume he's going to do great at whatever he does and hopefully I'll have a hand in some of that.”

Sherod has not ruled out trying to play professionally overseas after he finishes rehab, but he’s working on his Master’s degree in education, and has an offer from his alma mater at St. Christopher’s to come and teach and likely coach the Saints basketball teams.