🇫🇷World War I letters give Chesterfield students hands-on lesson: ‘You can feel the history’

CHESTERFIELD COUNTY, Va. -- Some sixth graders at Providence Middle School in Chesterfield County are getting a hands-on history lesson thanks to dozens of century-old letters from World War I.

Every other day Ms. Jennifer Covais’ students arrive to crunch numbers as they immerse themselves in the past using authentic dispatches written from war-torn France during WW I.

The author, Johnny Cawthra, was a disabled clerk with American Express who could not serve in the military because he was blind in one eye.

“They love writing. It's an elective. It is an honors writing class,” Covais said.  "I like to make memories with my kids."

Students are transcribing Cawthra’s observations that range from his visits with wounded soldiers in a hospital and watching President Wilson to witnessing the ravages of war.

“It's pretty cool because I’ve never held anything this old,” Sterling Brummer said.

The 50-plus delicate, uncensored letters, which span from 1918 to 1922, belong to the Virginia War Memorial.

Jim Treisler with the Virginia War Memorial approached Covais about using the Cawthra collection as a teaching tool.

"Johnny Cawthra is definitely a hero. Everyone would have understood if he just stayed home in 1918," Triesler said. "It's probably not ideal for sixth graders to be handling the letters, but these letters were written to be read, to be enjoyed.”

Allowing the honors students to hold each document was intentional.

While some preservationists might cringe at this true hands-on lesson, it is not often that children -- let alone adults  -- can access and handle such rare relics. 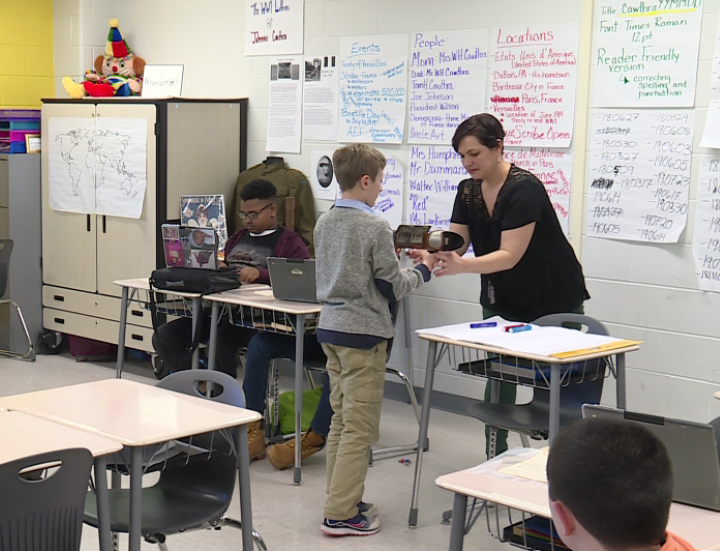 “A few of the students were afraid to touch the letters, so they left them in the plastic,” Covais explained.

But students like Dylan Field treat each page and memory of Cawthra with great respect.

“It is really interesting how well preserved it is,” Dylan Field said. “You know the person who wrote this held this, so you can feel the history and feel that you’re part of history.”

The months long assignment blends a cross-section of subjects.

“If it sparks a love of history and writing, then it’s a win-win,” Covais said.

Triesler believes Cawthra would be proud that children are learning from his letters.

“I never would have guessed this would have happened," Dylan Field. said. "This is one of the best things I’ve ever done in my life and I really enjoy it."

Once the students in Ms. Covais’ class finish with the project, they will submit an “Unsung Hero” documentary in hopes of winning a grant called the Discovery Award worth up to $7,000.