PARIS — Even Stan Wawrinka had to smile before Sunday’s French Open final when the stadium announcer listed year-by-year each of the nine previous titles Rafael Nadal had won at Roland Garros.

Another one can now be added to the list — and it is one for the ages — after the Spaniard crushed Wawrinka 6-2 6-3 6-1 to become the first man to win the same grand slam on 10 occasions.

Indeed it is a feat that may never be duplicated. 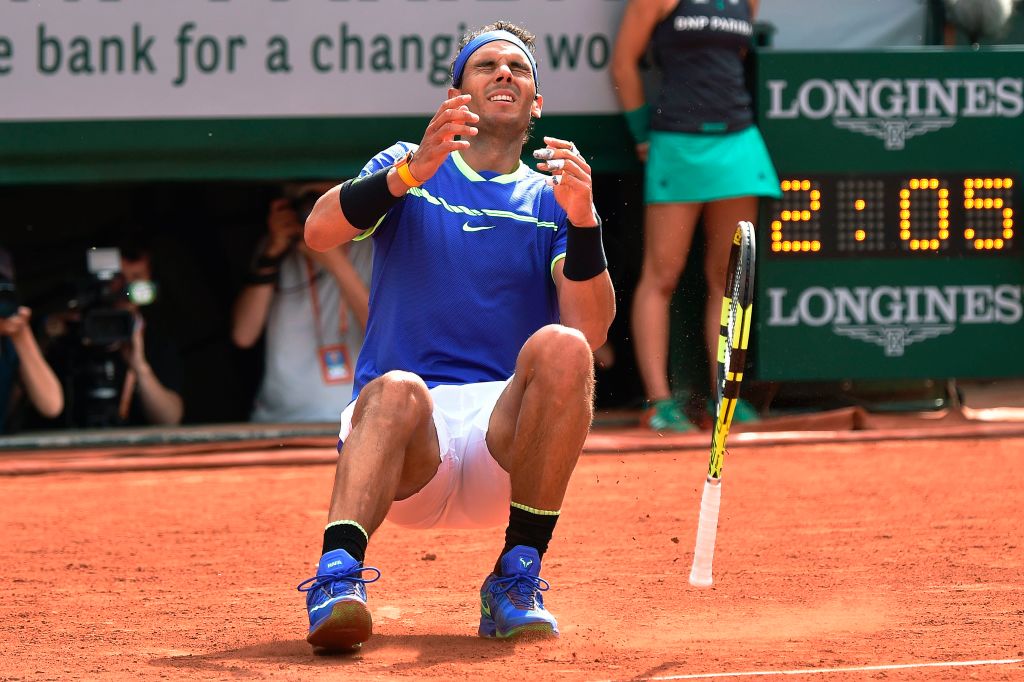 He collapsed to the court when Wawrinka sent a backhand into the net and seconds later an emotional Nadal sunk his head into his towel while in his chair.

His coach and uncle, Toni, got choked up, too, when he unexpectedly came on court to present Nadal with a special trophy celebrating those 10 titles. Toni won’t travel with his nephew next year, as he steps aside to focus on his work at Nadal’s new tennis academy in Mallorca.

Only twelve months ago a tearful Nadal bailed from his favorite tournament in Paris in the first week with a wrist injury, another in a seemingly endless list of ailments to derail the 31-year-old.

Be it his knees, wrist or appendicitis, Nadal has always managed to recover and rediscover some of his finest tennis despite having doubts.

Agonizingly close to winning a 15th major at the Australian Open in January — he lost to great rival and Wawrinka’s fellow Swiss Roger Federer after holding a break lead in the fifth set — there was simply no denying Nadal at Roland Garros as he ended a three-year drought at majors.

Asked if No. 10 was more special than the others, Nadal said yes.

“It’s true that this one is gonna be one of the more special ones for the number, for what happened on the ceremony after the final, for so many things,” he told reporters.

“And because I am 31 already and not a kid anymore.

“Because of the level of tennis and accepting that I have had problems, physical problems for the last period of time, it’s an important one.”

Nadal moved into sole possession of second place in men’s majors, pulling away from American Pete Sampras and once again getting to within three of Federer.

And for the third time — after 2008 and 2010 — he won the French Open title without conceding a set, dropping a mere 35 games in seven matches. He averaged less than two hours on court.

He is not dubbed the ‘King of Clay’ for no reason.

Gustavo Kuerten, the much loved Brazilian who was feted along with other tennis Hall of Famers prior to the finale, insisted last week Nadal could win several more French Opens.

If he does so next year, his 11 titles would match what Margaret Court accomplished at the Australian Open in the 1960s and 70s. She is the lone other tennis player to reach double digits at the same major.

Certainly Nadal’s form suggests he has plenty of good tennis left in him but he’ll want those injuries to stay away.

Should he continue to pile up victories at Roland Garros, it will indeed be without Uncle Toni. Former French Open winner Carlos Moya — currently Nadal’s co-coach, added last year for a fresh voice — will be taking on more of the load.

All those years ago, it was Toni’s decision to turn Nadal from a right-hander — his dominant hand outside of tennis — to a lefty. A masterstroke.

There is no greater challenge in tennis than trying to defeat Nadal in a best-of-five set match on clay, so Wawrinka looked back on his fortnight with fondness once the immediate disappointment faded.

“For sure this score wasn’t good, the match wasn’t good, but at the end of the day there’s a lot of positives to take from the last few weeks,” said Wawrinka.

He lost his first grand slam final in four attempts, having opened his account by topping Nadal at the 2014 Australian Open.

He played 4 1/2 hours against world No. 1 Andy Murray in Friday’s semifinals but said his fitness wasn’t the issue.

‘You shouldn’t think too much’

“Roger and Rafa, they are very good,” said Wawrinka. “With them, you hesitate. Even though I have a game plan, even though I know what I have to do, there is always some hesitation in your mind.

“So this is something that is very difficult to control. And if you miss a ball, if you hit a ball short, they will attack you.

“When you play against them, you have to go for your shots and you shouldn’t think too much.”

In the first set on Philippe Chatrier court, the Swiss controlled most of the rallies as Nadal opted to sit back and not force matters. He admitted to nerves.

Nadal saved the first break point in the third game with a good serve — the lone break point he faced — then Wawrinka immediately saved four. But Nadal pulled away to win four straight games from 2-2.

It was a steamy day in Paris — temperatures hovered around 30 degrees Celsius — a boost to Nadal’s heavily spun forehand that can trouble players with one-handed backhands.

He clearly stepped up his game in the second game of the second, adopting a more aggressive stance on the baseline and dictating proceedings. After one rally in which he bullied his foe all over the court, Wawrinka placed a the ball in his mouth in frustration.

Nadal’s blazing forehand down the line — clocked at 99 miles per hour — drew prolonged gasps from the crowd at 4-1. He was now in full flow.

Wawrinka knew he had to break Nadal to stay in the second set to have any — small — chance of triumphing: Nadal was 11-1 in grand slam finals when taking the opener.

But it didn’t materialize and Wawrinka flung his racket to the court in disgust when he missed a forehand passing shot with Nadal stranded.

Wawrinka — with a seemingly smile of resignation on his face — implored the crowd to get behind him when he delicately sent a chipped backhand past Nadal in the fifth game of the third. He was broken though a few seconds later to trail 4-1 and the end swiftly followed.

At one point when talking to the crowd, Nadal switched from French to English because he said his French was “very bad.”

His play at the French Open hasn’t been, that’s for sure.

“I’m not the first — and not the last to lose against him on clay,” said the runner-up.