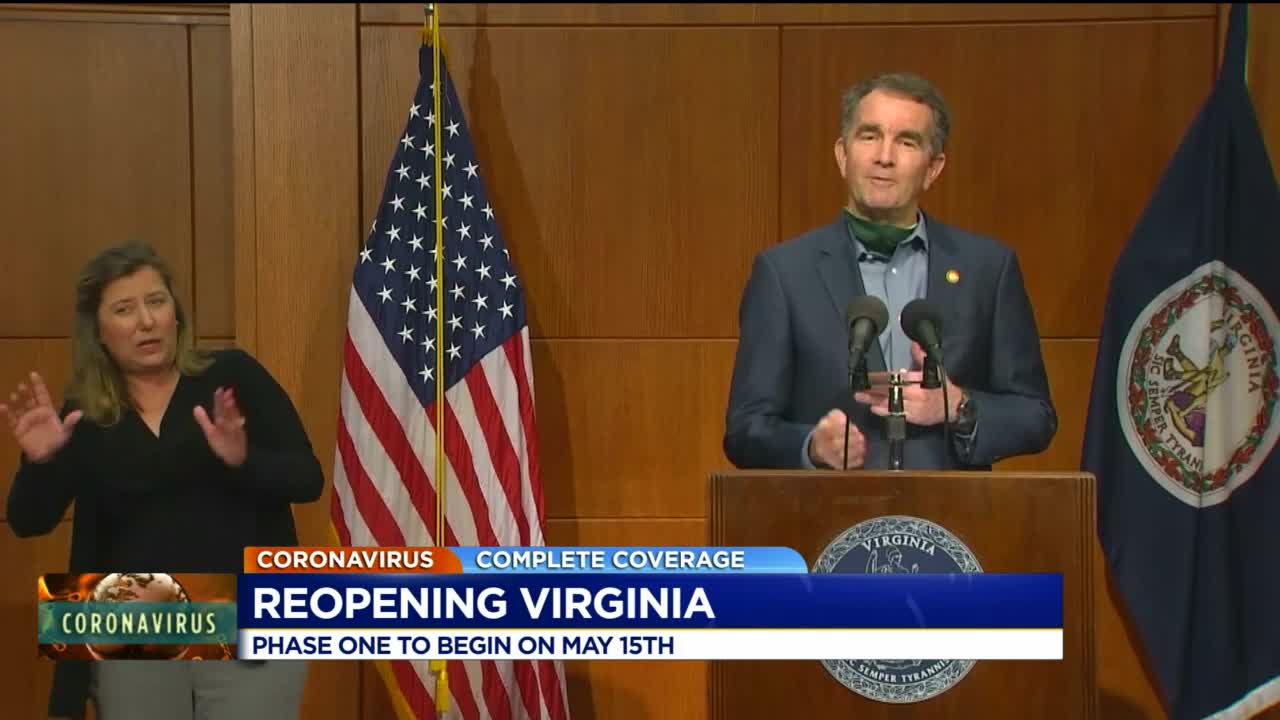 Gov. Ralph Northam has announced a date for COVID-19 restrictions to begin being lifted in Virginia 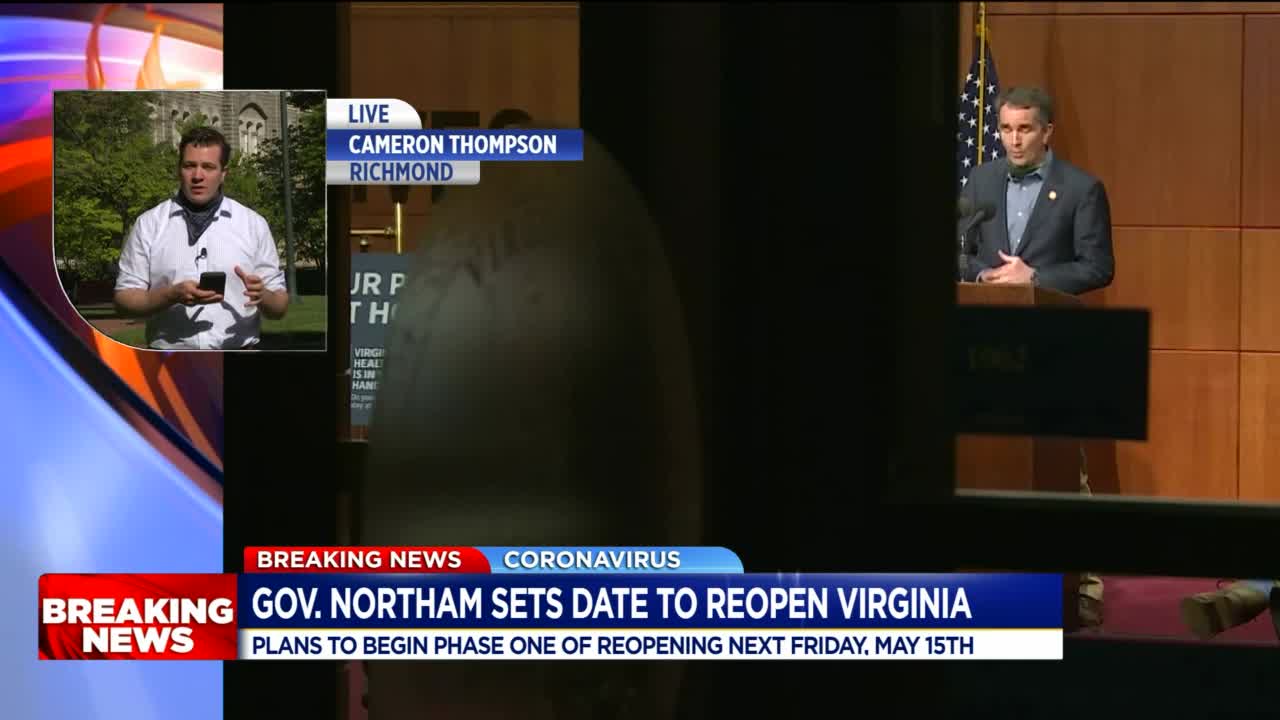 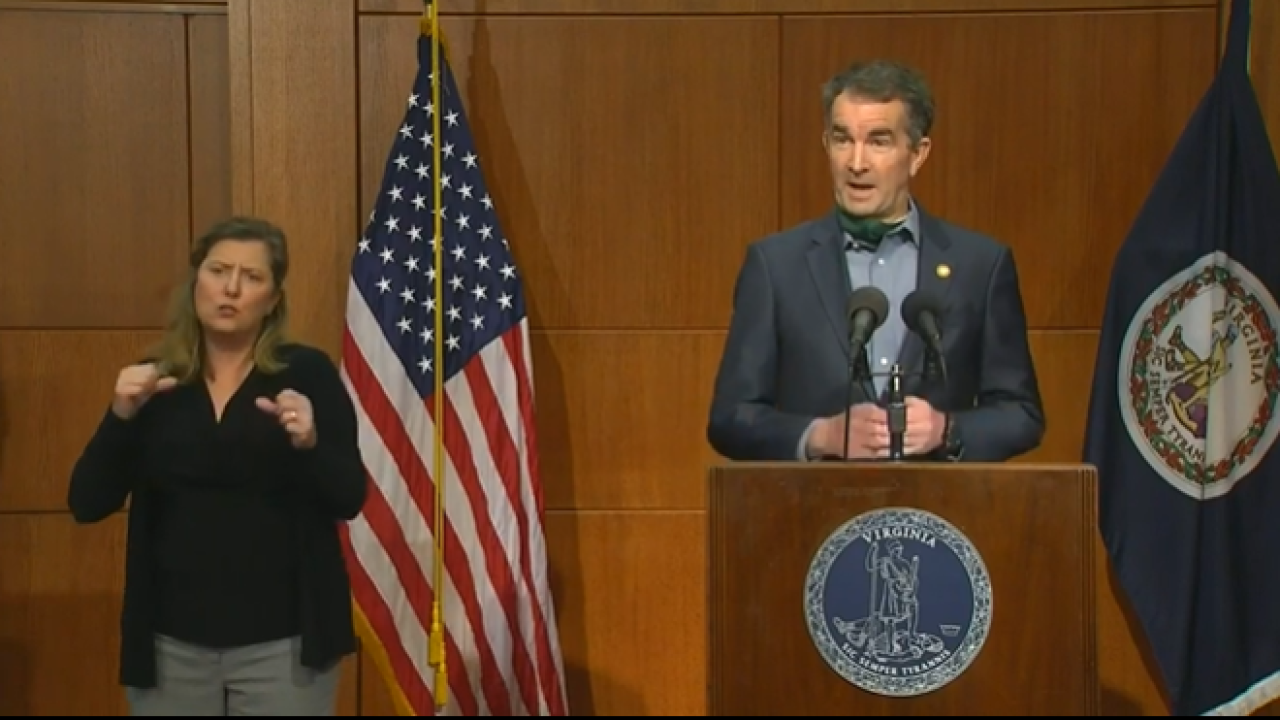 RICHMOND, Va. -- Virginia Gov. Ralph Northam says the commonwelath is close, but not quite ready to begin the reopening process.

So, he is extending an executive order mandating that some nonessential businesses close for another week, until May 15. His executive order, which forces closed some businesses and severely restricts how others operate, was set to expire May 8.

His order also bans gatherings of 10 or more in public or private.

Northam announced at a news conference Monday that the state is seeing positive trends in data related to spread and treatment of the coronavirus pandemic, but he said more time is needed before restrictions can be eased.

Northam said that he anticipates that business restrictions can be eased on May 15, which would be the beginning of phase one of his three-part plan to lift restrictions and begin reopening the state.

Phase one would allow barber shops, salons, gyms to reopen and allow restaurants to resume dine-in seating, with restrictions.

"Phase one means you can get your haircut, but you'll have to make an appointment. You can go to a restaurant, but it will be more spread out," explained Northam.

“Phase one means more retail establishments can be open, but they'll have to operate at a lower capacity. You can go to the gym, but with fewer people and more requirements for cleaning.”

He went on to say that the phase could last two to three weeks.

Northam says his administration will issue specific guidance to certain industries later this week on how they’ll be allowed to reopen.

Here’s what phase two and three look like pic.twitter.com/Z0p4qqKtus

Northam also says he’s changing his stay-at-home order to move in line with phase one on May 15 and turning it into a safer-at-home order.

The governor, a Democrat, has come under increasing pressure from Republican lawmakers and others to reopen the state like some other Southern states have done.

When asked, Northam said he wanted to reopen the state as a whole, rather than do it by region. He said he felt doing it regionally would be picking winners and losers and could cause more of a division in the country.

"Virginians need a light at the end of this tunnel. The Governor’s decision to use a ‘one size fits all’ approach is going to negatively impact certain parts of Virginia worse than others. The ‘potential for division’ the Governor mentioned is already a reality, as citizens across Virginia watch their livelihoods wither."

Northam laid out in his “Forward Virginia” blueprint that the state needs to meet the Centers for Disease Control and Prevention’s guidelines to begin phase one of the reopening process. That includes sufficient hospital capacity and supply of personal protective equipment (PPE) and a 14-day decline in both the hospitalization rate and the percentage of positive tests.

Northam has also said he wants the state to be able to process up to 10,000 COVID-19 tests per day and have a robust contact tracing operation in order to track down and isolate new cases.