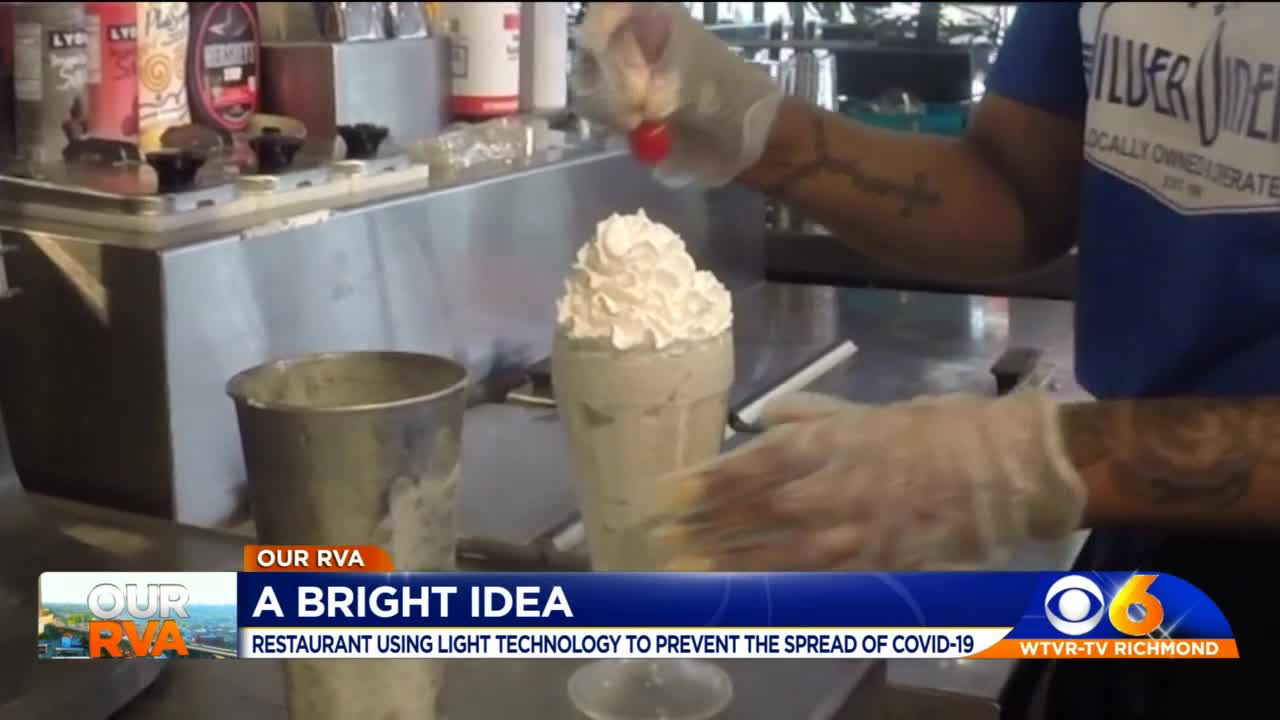 Silver Diner in Henrico's West End considers itself to be a contemporary lifestyle restaurant that constantly innovates the American diner experience. Now that innovation is focused on safety measures for their customers with a new, state-of-the-art air purification system developed by local lighting and energy management firm Veteran LED.

HENRICO COUNTY, Va. -- Silver Diner in Henrico's West End considers itself to be a contemporary lifestyle restaurant that constantly innovates the American diner experience. Now that innovation is focused on safety measures for their customers with a new, state-of-the-art air purification system developed by local lighting and energy management firm Veteran LED.

Silver Diner purchased and installed an automatic overnight germicidal ultraviolet c-light fixture that disinfects high-touch areas when the restaurant is closed and empty.

“So when that comes on, it is exposing all the surfaces around it in a certain cone to UV-C lighting completely annihilating anything that might be near that wasn't already caught by the HVAC system, also surfaces, tables, anything like that,” Nicholas Silberman, Silver Diner Hospitality Manager, said.

They also added an air filter unit, affectionately nicknamed 'Flo,' which traps 99.97% of dust, pollen, and airborne particles. All the changes make Silver Diner the first restaurant chain in the country to have this multi-level protection.

“Any air coming directly through gets pulled in and uses that high-efficiency particulate air, that HEPA filtration, captures it, ionizes it, puts it back out as clean and purified,” Silberman said.

All of the equipment comes from Veteran LED, based in downtown Richmond.

Chris Rawlings, a Marine veteran who founded the company back in 2014, is also the Chief Efficiency Officer.

“The radiance field doesn't extrude the unit so there`'s no harm to anyone. This can operate while people are in the building,” Rawlings said.

He also said the large and smaller wall-mounted units help create a much safer environment that kills almost all viruses in the air. They've also provided Silver Diner with hand-held devices.

“That ultraviolet light is hitting that surface, what` it's` doing is if there are any viruses on that surface, it`'s going to restructure that DNA and make it non-replicable and that is essentially what it means by killing the virus,” Rawlings said.

Customers at Silver Diner are also provided information on all the measures the restaurant is taking.

"It makes me feel that I have a safe place to go to with my family and dine sufficiently,” customer Pamela McCray said.

Watch Rob Desir's "Our RVA" reports Wednesdays on CBS 6 News at 4 and 5:30 p.m. If you know someone Rob should feature, email him at Rob.Desir@wtvr.com