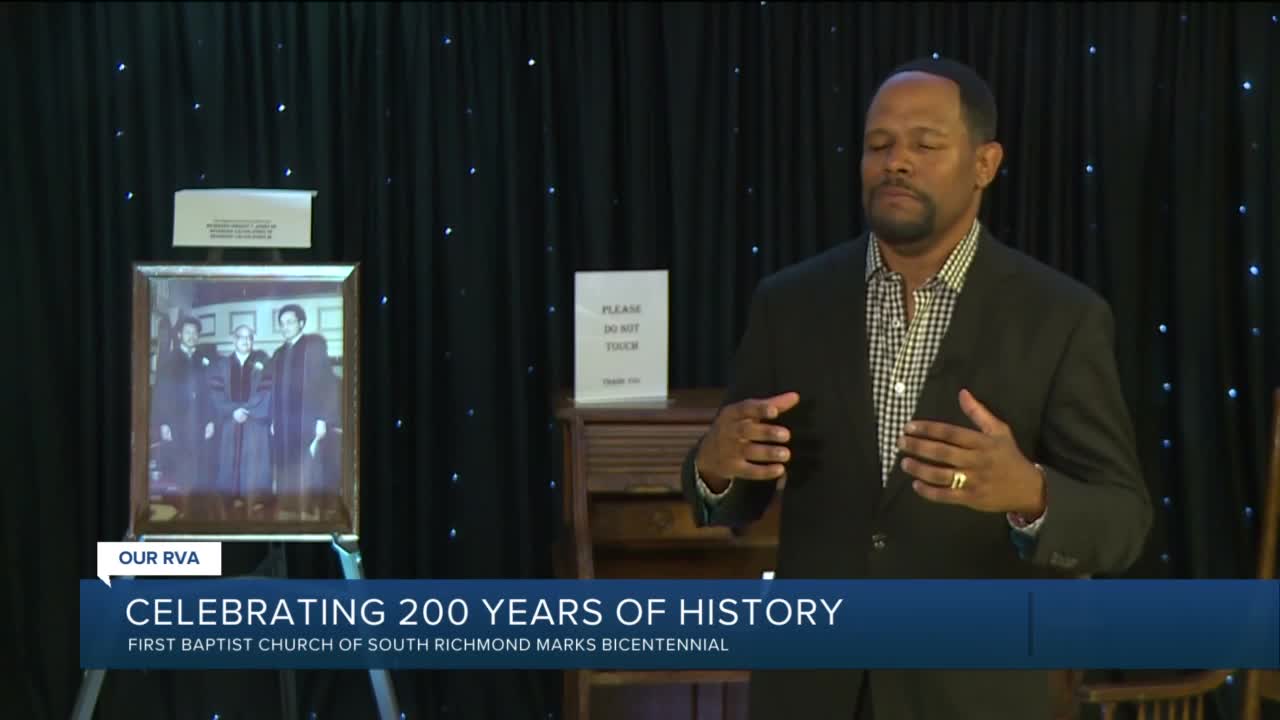 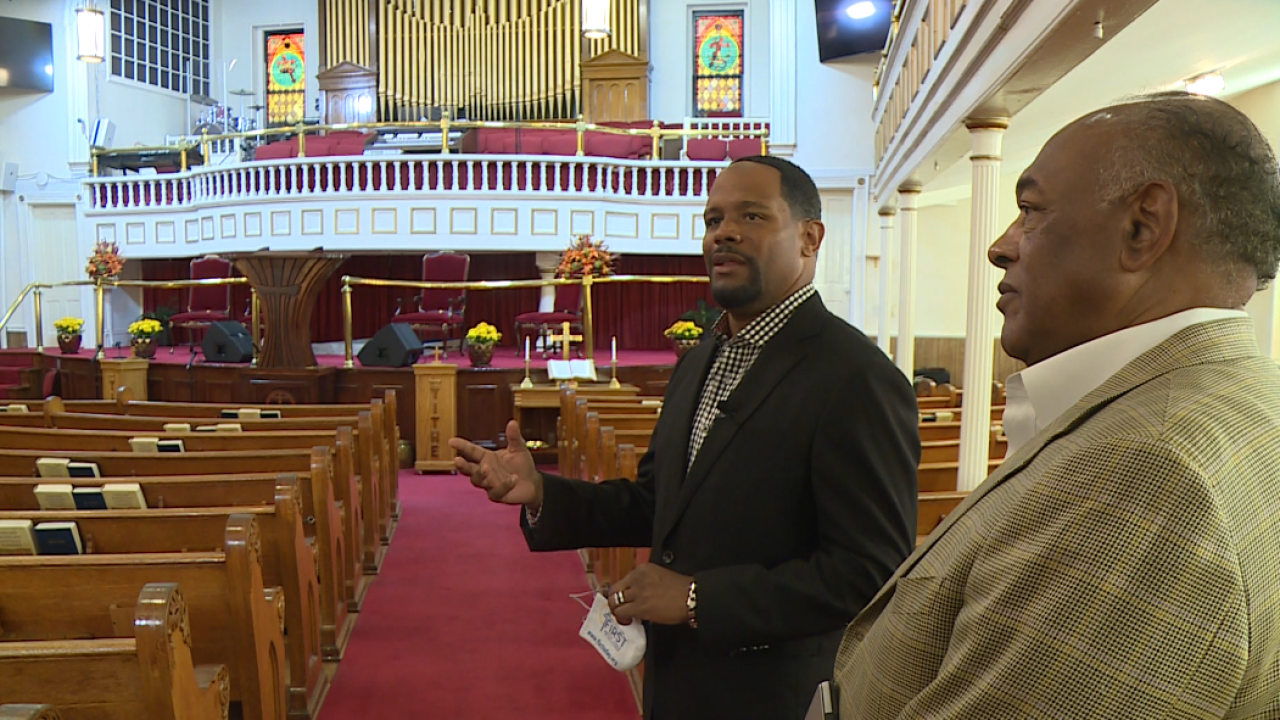 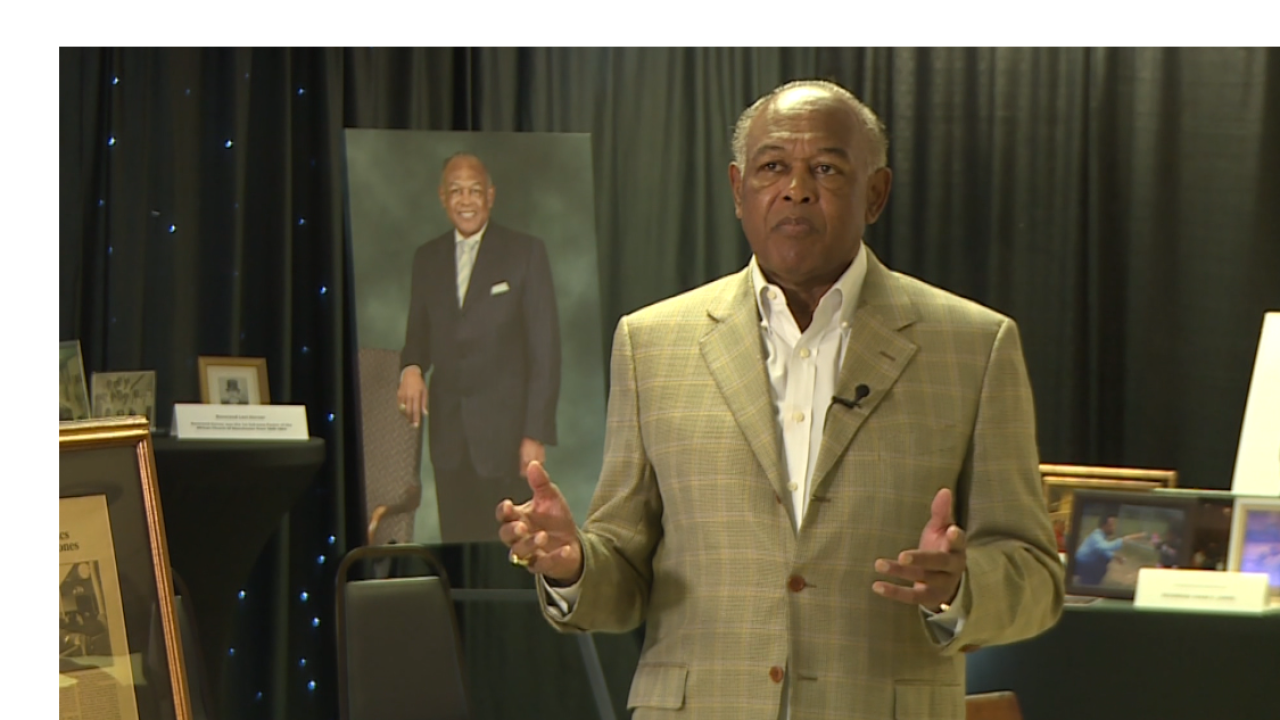 RICHMOND, Va. -- After decades of silence, the bell tower at First Baptist Church of South Richmond (FBCSR) chimed on September 13 to begin a series of events commemorating the church’s bicentennial anniversary celebration in May of next year.

Their 90 foot steeple, which happens to be the tallest point on the Richmond's southside and can been seen from downtown, was lit while “Lift Every Voice” played to projected images of the church’s five Black pastors in its nearly 200 year history.

Evangeline Brooks knows quite well as she has been a member of FBCSR for the past 75 years, serving in a variety of roles, including Deacon Emeritus.

“That’s all you had was the church! And you leaned upon the church to keep you informed on what was going on in the community at that time,” said Brooks.

FBCSR, located off Decatur Street in the Manchester neighborhood, is one of the oldest Black congregations in Richmond.

Now, they are putting their history on display with a temporary museum in their auditorium.

“When I look around here, I think of not necessarily things I’ve touched, but it’s a reminder of the strength of the congregations that preceded me. The shoulders that I’m standing on,” said Senior Pastor Dwight Jones.

“The different eras, to see how our mother’s and father’s, how resourceful they were and to see how they lived in their time and how they did church in their time, it’s really a history lesson,” said Pastor Derik Jones.

Father and former Richmond Mayor, Dwight Jones along with son Derik gave CBS 6 a look at both the exhibits on display in the museum, as well as items that are seen every week at Sunday service: from the pulpit, to the organ pipes, as well as the original pews.

“You just can’t duplicate and recreate this. The closeness of it, the ambiance. Today’s architecture is so spacious and grand. This is one of a kind,” said Derik.

“It just says that when you walk in here you are someplace,” the former mayor added with a laugh.

For a congregation of about 3,000, Derik says it was important to have this museum for those who aren’t familiar with all that FBCSR has accomplished and endured. But Derik also says this museum is not for just its members, but the entire community in the months leading up to the bicentennial anniversary.

“They’ll be fireworks all through 2021 because we are so proud of, not just 200 years, we’re just really proud of what God has done,” he added.