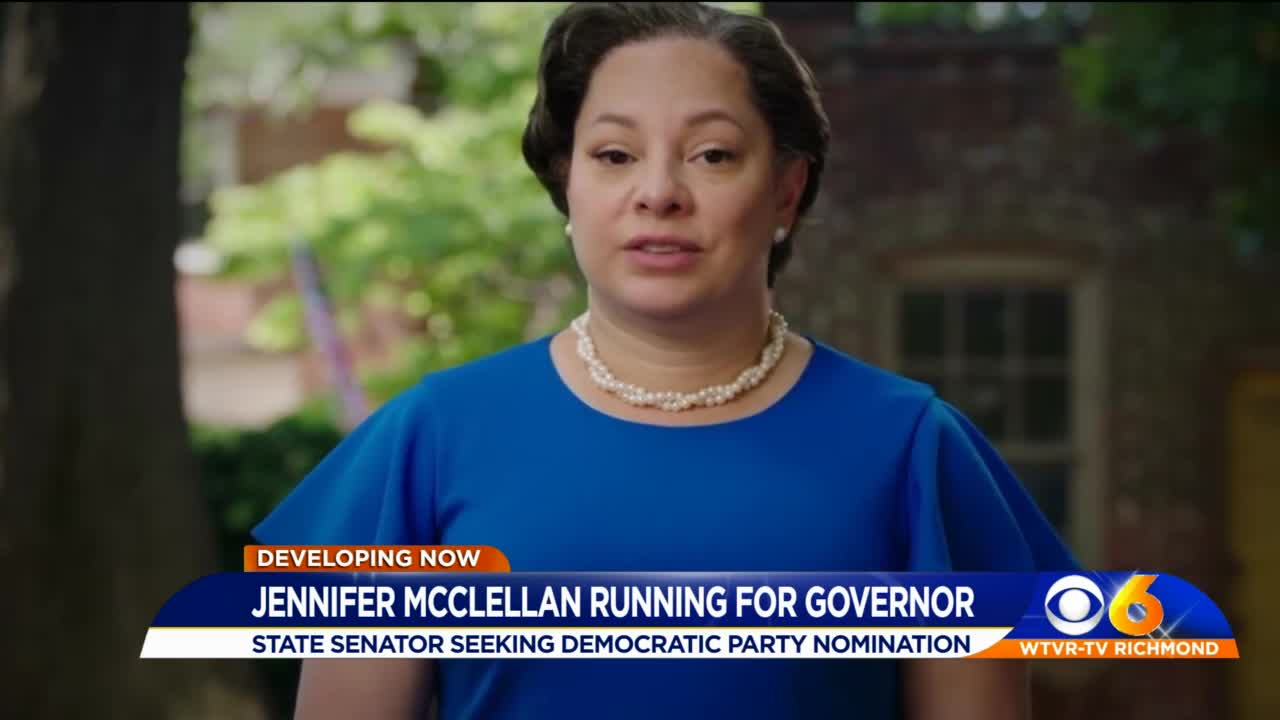 Virginia State Senator Jennifer McClellan has announced her plan to run for Governor of Virginia.

“We stand at a critical time in our history, as Virginia faces health, economic and racial inequity crises,” Sen. McClellan said in a statement Thursday announcing her candidacy. “This is a moment to step boldly into our future. I’m running for governor to lead Virginia in building an inclusive economy that doesn’t leave people behind, a healthcare system that everyone can access affordably, and public schools that deliver on the promise in our constitution to provide high quality education to all children."

"I got interested in government from learning from my own family's experience and through history, that government can either be a force for progressive change that solves people's problems, or it can be a force of oppression for some and opportunity for a few," McClellan told CBS 6 reporter Brendan King. " I'm ready to make progress and solve problems. And I've been doing that, you know, first as a community leader, a party leader since college, and then as a legislator for nearly 15 years. I'm ready to take that next step and lead the agenda and lead Virginia through the crisis and recovery."

King asked her to comment on the recent Black Lives Matter protests and calls for Virginia to rethink the way police departments operate.

"We need to make sure that we have transparency and accountability of police misconduct and we have to have civilian oversight over many aspects of our criminal justice system, not just the police, but you know, the Department of Corrections and all aspects of it," she said. "We need to spend our resources and energy on the root causes of crime and preventing crime and not just waiting and focusing on punishment and incarceration. And I have a record of working on those issues. And that will continue to be a priority going forward."

She said Virginia must also address generations of racial inequity that have left some people without access to the things they need to thrive.

"The Kerner Commission report in 1968, sort of laid bare generations of inequity that led to race riots then and said what we needed to do to address that inequity, but it was never done. And so now it's time to do it," she said. "We're fighting the same fight that my parents, my grandparents, my great-grandparents fought. And I look at my children and I say we cannot leave these fights to them. It is too critical, on so many issues, whether it's the economy, the environment, access to health care, access to education, access to voting, the health of our democracy. I can't leave those same fights to them, I have to leave them in a much better place than we are today. And I'm going to do everything within my power to do so.

Virginia will elect a new governor in November 2021.

At this critical time in our history, we’ve been afraid, outraged, and inspired. Where do we go from here?

Boldly into the future.

I'm running for Governor of Virginia to rebuild an inclusive Commonwealth and transform pain into action. Join me: https://t.co/HrLj3QxrTC pic.twitter.com/s80JFP0E4Z