Search to resume for 1887 time capsule under Lee monument

Historian Dale Brumfield believed the box found was less of a time capsule and more of a personal commemorative collection for the men behind the statue's construction.

RICHMOND, Va. — The spot in Virginia where a towering statue of Confederate Gen. Robert E. Lee once stood over Richmond's tree-lined Monument Avenue is now just a pile of boulders, rubble and sand.

But for the next few weeks, workers will continue their search for a famed 1887 time capsule that was said to be buried under the massive monument, long viewed as a symbol of racial injustice.

“We know what to be on the lookout for,” said Devon Henry, the contractor who took down the statue and its pedestal. “It will be a very decorative piece of granite that will look nothing like what’s already there.”

Henry spoke the day after one of the more anti-climactic moments in historic preservation: State conservators spent five hours gingerly prying open a corroded lead box that some believed - or at least hoped - was the 1887 time capsule.

But they didn't find the expected trove of objects related to the Confederacy, including a picture of a deceased President Abraham Lincoln. Instead, conservators pulled out a few waterlogged books, a silver coin and an envelope with some papers. 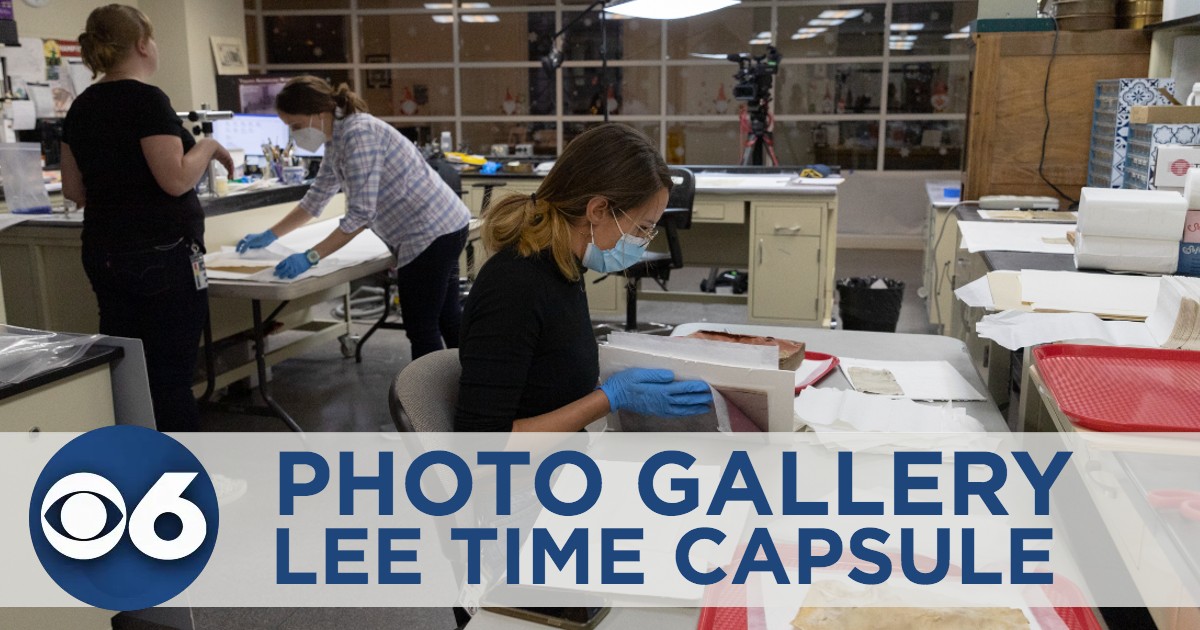 The prevailing theory among some Thursday was that the lead box was left by a person - or persons - who oversaw the monument's construction.

“They decided to have a little vanity project,” said Dale Brumfield, a local historian who focuses on the Richmond area. “It was not so much a time capsule as it was a self-commemoration capsule. And who was going to stop them?”

The box contained a novel written by Collinson Pierrepont Edwards Burgwyn, a city of Richmond civil engineer who worked on the plans for Monument Avenue.

The envelope contained an image of a man, with the words “James Netherwood master stone mason” written on the back. Netherwood supervised construction of the pedestal on which the large equestrian statue of Lee had stood.

“While Netherwood was still alive, he had a sculptor create a granite, life-size statue of himself,” Brumfield said. “Burgwyn probably had an ego about the same size.”

Julie Langan, the director of the state’s Department of Historic Resources, agreed that the box could be the work of people involved in the monument's construction, although she stressed that was still yet to be proven.

“If you go into historic buildings, you’ll sometimes find places where craftsmen have carved their initials to sort of leave a lasting imprint of their involvement,” she said. “And I see this as a similar sort of gesture.”

Langan said the box that was opened Wednesday was “more interesting than exciting.”

“What I found exciting is how excited the public has gotten around this story,” she said. “It shows me that the public can really get excited about history.”

The Lee statue was erected in 1890 in the former capital of the Confederacy. Its removal in September came more than a year after Gov. Ralph Northam ordered it in the wake of protests that erupted after the police killing of George Floyd in Minneapolis.

The statue was one of five Confederate tributes along Monument Avenue, and the only one that belonged to the state. The four city-owned statues were taken down in 2020, but the Lee statue's removal was blocked by two lawsuits until a ruling from the Supreme Court of Virginia in September cleared the way for it to be dismantled.

Henry, the contractor who took down the statue, said all of the decorative granite has been removed from the site. The work on the pile of rubble that's left - and the search for the 1887 time capsule - will resume Monday.

If all goes well, they'll find a much bigger box. It will be made of copper instead of lead. And there will be some 60 items, including a picture of President Lincoln lying in his coffin.

“We'll continue to do what we're doing in a very meticulous and professional and safe way,” Henry said. “And we’ll see what happens in a few weeks.”