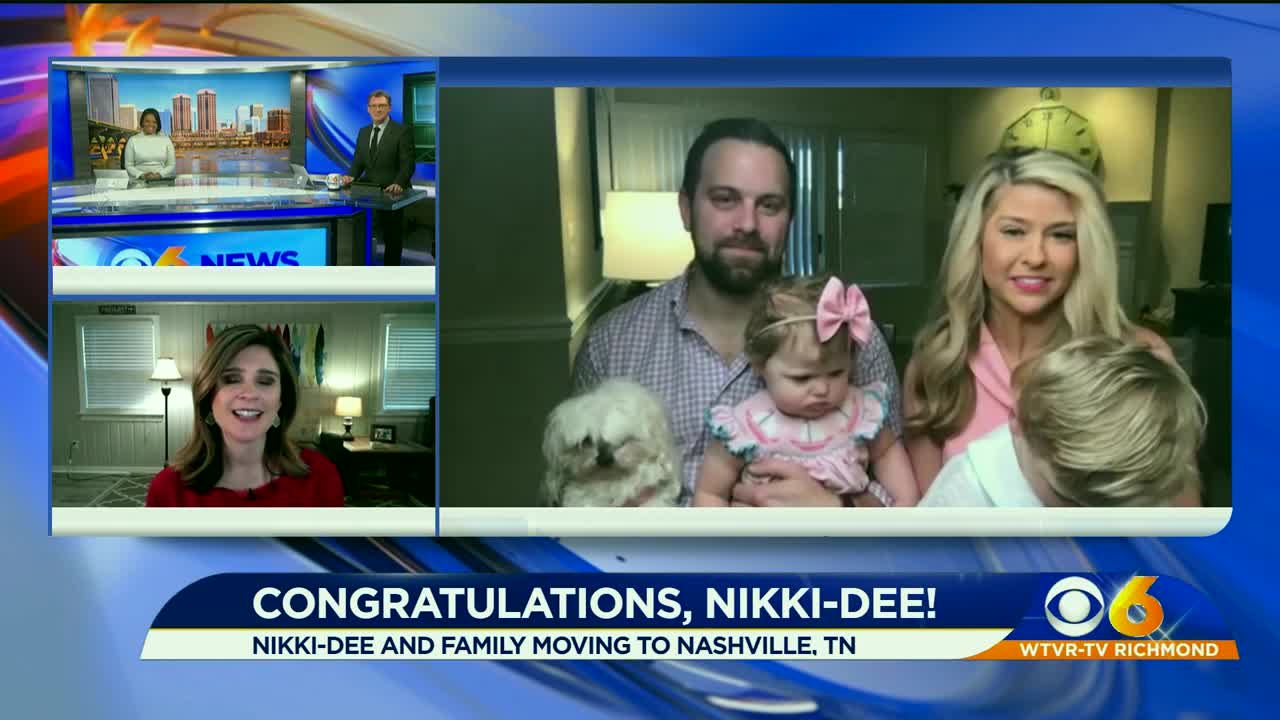 Nikki-Dee announces she is leaving Richmond at the end of the month.

RICHMOND, Va. -- Nikki-Dee Ray announced she has accepted a morning meteorologist position at WTVF, a Scripps-owned television station in Nashville.

"I'll be honest, this is not [an announcement] I thought I would ever be saying to you guys. But when I moved here, I didn't know anybody and y'all quickly became my family. And I can't thank you enough. We've been through so much together," she said on CBS 6 This Morning.

She went on to mention the recent loss of two grandparents.

"That kind of shut this door and made me realize how precious life is. I'm the only grandchild on my mom's side of the family and God's opened doors we didn't know could be opened and when He opened them up, you follow suit, and that's what we are going to be doing," she said. "We have decided to move closer to my family. We will be moving to Nashville coming up in May. So my last day here at CBS six will be on May 1. It's a very hard situation for us to try and figure out, but we're very excited and we love you all And we just pray that we can continue to work together even though we may be a distance apart."

"Nikki-Dee's has been a blessing to CBS 6 and the Central Virginia community since her arrival five years ago," WTVR CBS 6 general manager Stephen Hayes said. "She will be missed, but we are excited for Nikki-Dee as she joins our Scripps sister station in Nashville. We wish her all the best!"

Not only did Nikki-Dee help CBS 6 This Morning become Richmond's #1 rating morning news program, she also dedicated her time to school visits and helping non-profit organizations.

"Nikki-Dee came to Richmond determined to make it home and serve our community, as both a meteorologist and a champion for the great people of Central Virginia. Five years later, it is clear she left quite a mark on our television station and Richmond with her personality and ability to connect with our viewers.," WTVR CBS 6 news director Sheryl Barnhouse said. "We will greatly miss our colleague and friend. We couldn't be happier for Nikki-Dee, her husband David and their two children to be closer to her family, while remaining within our Scripps family."

Nikki-Dee's last day in Richmond in May 1. The new morning meteorologist will be announced Monday morning.