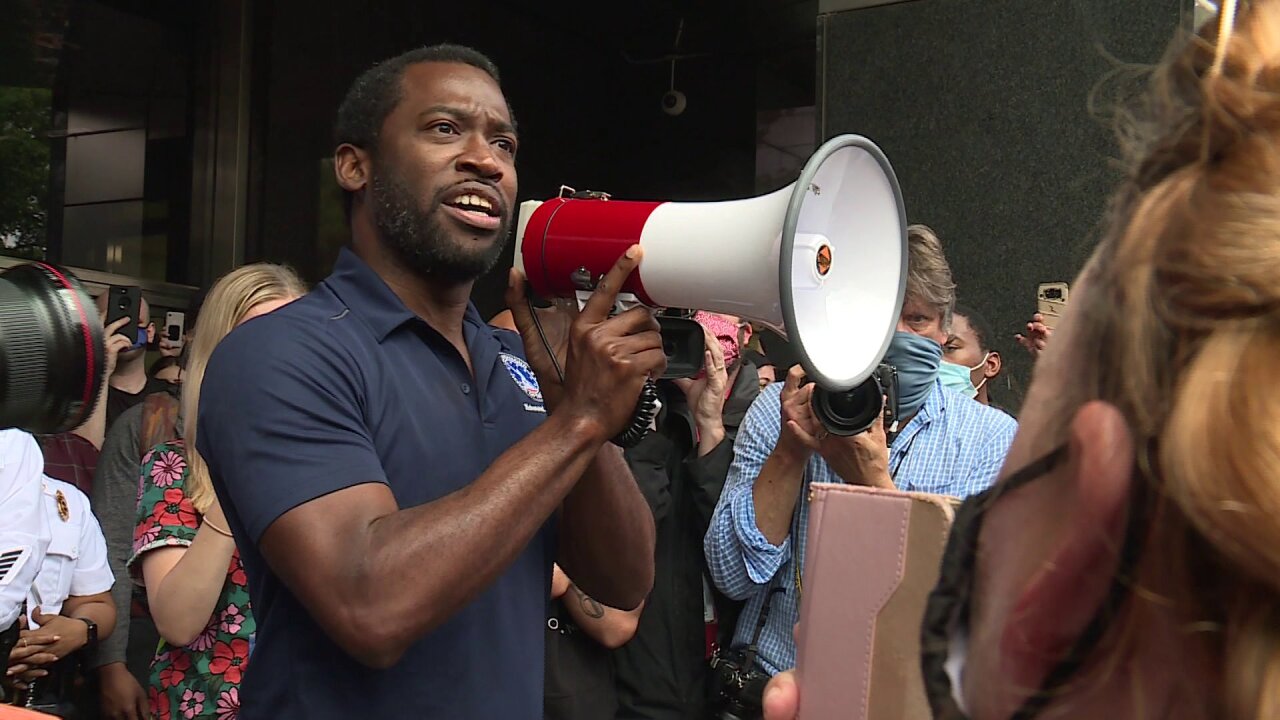 RICHMOND, Va. -- Richmond Mayor Levar Stoney has committed to enacting a crisis alert to aid police in deescalating situations involving mental health crises and exploring the creation of a Citizen Review Board for the city's police department.

Stoney announced the commitments while speaking to a crowd of thousands before a march on Tuesday in protest of nationwide displays of police brutality on African-Americans and the death of George Floyd at the hands of Minneapolis police.

"The mayor is committed to this work in order to help dismantle racist systems and policies and build more just ones that provide the opportunity for all city residents to succeed and thrive," the administration announced in a press release on Wednesday.

The crisis alert, also known as a Marcus Alert, is named after Essex County Public Schools teacher and VCU graduate Marcus David Peters, who was killed in 2018 by a Richmond Police officer while experiencing a mental health crisis.

Peters was unclothed and unarmed when he charged a police officer who shot him. Peters’ family said their loved one was experiencing a mental crisis and needed help, and have been advocating for the alert and a citizen review board to be enacted since shortly after his death.

The alert would enable the RPD and Richmond Behavioral Health Authority (RBHA) to work collaboratively on calls for service related to persons experiencing a mental or behavioral health crisis, with a focus on deescalation by law enforcement and crisis intervention by mental health experts.

In response to the recommendation by Peters’ family and community advocacy in the aftermath of his death, the Stoney administration and Richmond Police Department have been in conversation with the Richmond Behavioral Health Authority (RBHA) on the creation and implementation of a crisis alert system since 2019.

Mayor Stoney plans to engage with the family of Peters in the coming weeks to further collaborative dialogue around the details of the Marcus Alert and how it will operate. The Mayor will then introduce an ordinance to Richmond City Council.

Additionally, the Stoney administration is now committed to the establishment of a Citizen Review Board, an entity independent of the police department’s internal affairs that would consist of a diverse group of stakeholders who would be able to identify issues and recommend policy changes related to policing in Richmond.

A petition to establish a Marcus Alert and CRB written by the Richmond Transparency and Accountability Project has garnered more than 50,000 signatures, and describes the CRB as an entity that would give the community the power to check the police’s behavior, both on an individual officer level and systemically.

"We need an independent body composed of our neighbors, with seats specifically reserved for Black and Brown residents, public housing tenants, and those who live in the most policed districts. We need that body to have the power to audit police data and complaints, to identify racial biases and other systemic issues in RPD’s policing, and to proactively recommend policy changes. We need it to have the power to conduct independent investigations of complaints of excessive force and officer misconduct. We believe transparency and accountability are only possible with community access and power around all our public institutions," the petition reads.

In early 2020, the city began working on steps to ensure racial equity is a core component of its policies and practices.

“Yesterday, I marched with Richmond, for Richmond,” said Mayor Stoney. “George Floyd’s death may have happened in Minnesota, but the shock waves are bringing very valid pain to the surface in our city. Last night, Richmond told me to channel our city’s pain into reform.”

“Before the pandemic, I spent each and every day meeting Richmonders, gaining new perspectives on this city we all call home,” said Mayor Stoney. “The consensus is that some serious healing has to take place. We have so much work to do to build an equitable city and I’m committed to working with my fellow Richmonders to do so. That entails reforms to address racist systems, combating this public health crisis and addressing health inequities, and remaining committed to my administration’s priorities to life people up, including affordable housing, strong public education systems, economic empowerment, and fast and reliable public transportation.”