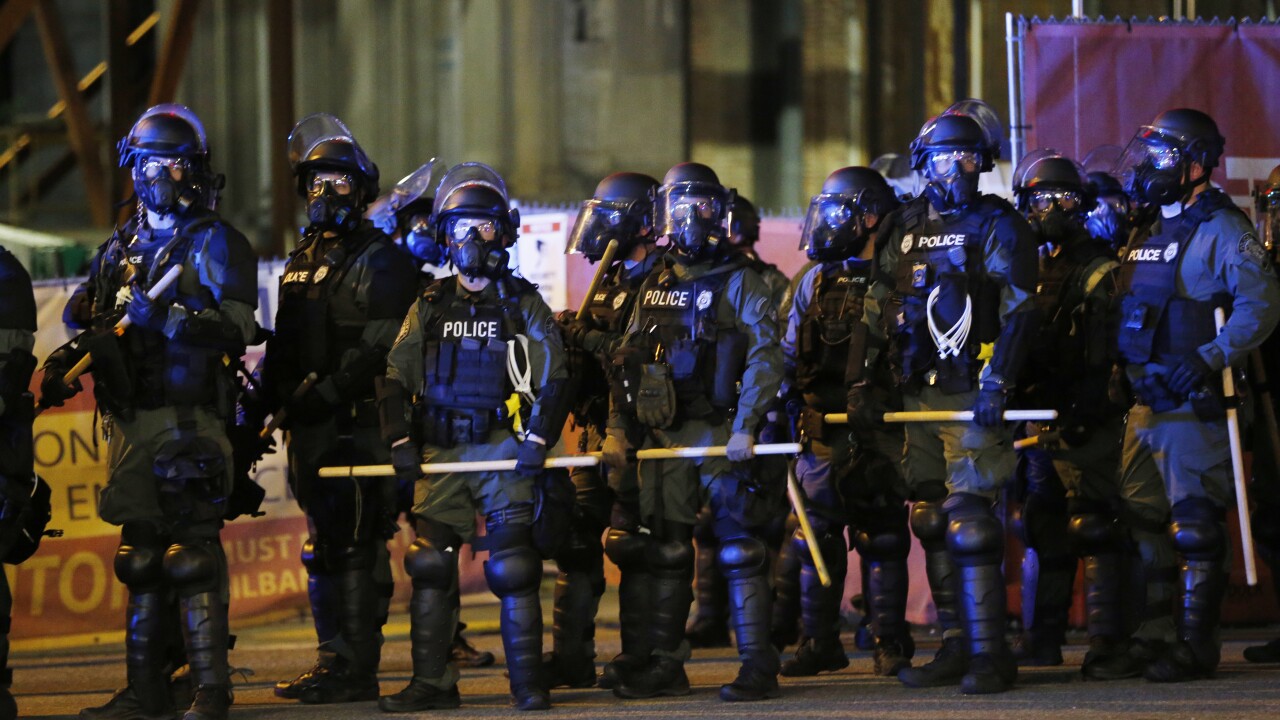 Steve Helber/AP
Police in riot gear prepare to disperse a group of protesters as they march through downtown for a third night of unrest Sunday May 31, 2020, in Richmond, Va. Gov. Ralph Northam issued a curfew for this evening. (AP Photo/Steve Helber)

RICHMOND, Va. – Groups of professional and student journalists are questioning the treatment of several journalists by Richmond Police during coverage of the protests and riots that have taken place throughout the city since late May.

The Student Press Law Center sent a letter to Richmond Police Chief Gerald M. Smith and Mayor Levar Stoney that accused the department of "violence and aggression" toward reporters covering citywide demonstrations that protested police brutality in the wake of the killings of George Floyd and Breonna Taylor, among others.

The Robertson School of Media and Culture at VCU, the Virginia Society of Professional Journalists, and the Virginia Press Association all signed the letter.

The letter detailed multiple incidents involving journalists from Virginia Public Media, The Commonwealth Times, and a member of the staff at NBC 12. The journalists alleged mistreatment in the separate incidents that included being pepper-sprayed despite showing press credentials, being detained and handcuffed while covering a protest, and police interfering with the recording of video between May 31 and July 26.

In the letter to Richmond Police, the Student Press Law Center said that while officers in riot situations may have a heightened sense of awareness, they are not excused from recognizing journalists' right to document matters of public concern.

"Law enforcement agencies are established to uphold and enforce existing laws not to use them as a pretext to punish journalists exercising their First Amendment rights to gather and disseminate news, information, and images," the letter read. "In none of these instances were the journalists accused of anything other than being in a place where protests were happening."

CBS 6 reached out to the Richmond Police Department on September 2 for comment about the letter, but has not yet heard back.

On June 1, the Richmond Police Department sent a memo to Richmond-area journalists discussing safety concerns while covering protests and riots. The letter urged journalists to immediately comply with officers' instructions to move back or leave the area.

Richmond Police Chief Smith had previously addressed the detainment of a Commonwealth's Times reporter when he said police "have to check out everybody."

"Multiple representatives of The Commonwealth Times have attempted to speak by phone with representatives of the Richmond Police Department – both for purposes of reporting news and for purposes of filing complaints about some of the behavior described in this letter – and have been completely rebuffed in their attempts to speak with anyone in authority," the letter read.

The Commonwealth Times Executive editor said the VCU student-run media was not on the Richmond Police Department's email media list.

"We never received any kind of rules or guidelines from the RPD about covering protests," Executive editor Andrew Ringle said.

Ringle said that staff from The Commonwealth Times have since been in touch with the police department following the distribution of the letter.

Jeff South, the President of the Virginia Chapter of the SPJ and longtime VCU journalism professor, said that in some cases, reporters who moved at the request of police officers still suffered consequences.

"From what we've seen... [the reporter] did exactly what the officer said. And then the officers came around and put [the reporter] in handcuffs," South said. "The fact is, when they do comply, it seems that officers themselves have not gotten the message that they should not then mistreat the press."

He cited another instance in which a second Commonwealth's Times reporter said she was sprayed with an irritant, despite the fact it appeared she was following procedure.

"She was not in the pack of protesters," he said citing video shared on social media. "From what I could see, it was clear that she was a reporter. She had her press pass around her neck, she was holding it up, you know, and still got sprayed."

South said that while he appreciated the advice given to reporters, officers needed to be given instruction to honor reporters' First Amendment right.

Jim Nolan, a spokesperson for Mayor Stoney, said that the administration takes the safety of the media seriously.

“The administration takes very seriously the safety of media in these challenging and unpredictable situations, and will do everything practically possible to safeguard and protect members of the press lawfully and responsibly engaged in the performance of their duties," he said.