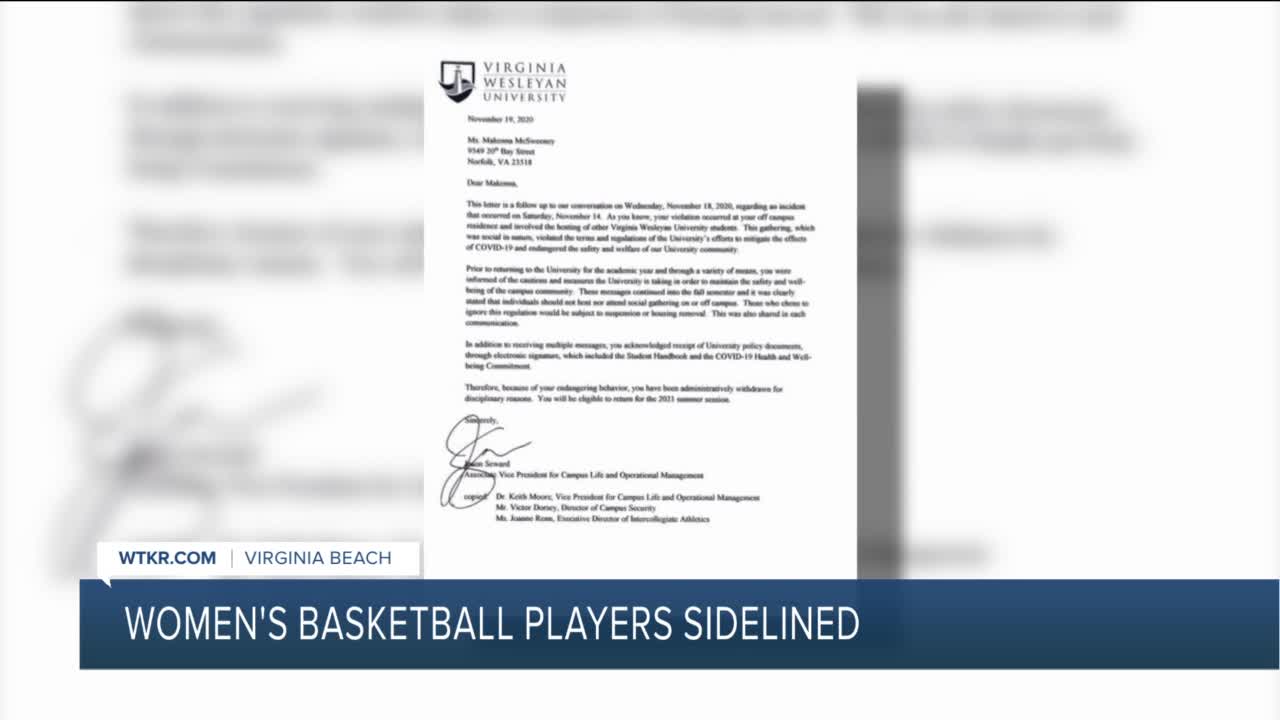 NORFOLK, Va. - A group of Virginia Wesleyan University women's basketball players have been suspended from on campus housing after violating COVID-19 protocols, the university said.

In a statement, the university said:

"The University takes very seriously the safety of the campus community and has strict COVID-19 safety measures and protocols in place to protect the health and well-being of students, faculty and staff. This information has been communicated clearly and regularly and we are proud that our community members have largely done their part to keep themselves and their peers safe.

Unfortunately, several members of our women’s basketball team violated these protocols with a gathering at an off-campus apartment. The consequence was suspension from on-campus housing and additional discipline by the intercollegiate athletics department.

There are also strict athletic practice protocols in place by the University and the intercollegiate athletics department. These protocols have been repeatedly communicated throughout the campus community, athletic department, and all teams. During practice, the women’s basketball team wears face coverings and plays in a controlled environment overseen by athletic staff, coaches and sports medicine personnel."

News 3 spoke with the assistant captain of the basketball team, and she said 11 members of the women's basketball team have been kicked out of on-campus housing and have to be out by 4 p.m. Thursday. She claims that this stems from a Thanksgiving meal that they attended over the weekend.

School leaders say the basketball players “endangered the safety and the welfare of the university community” by getting together during a pandemic. However, the players tell us all they were doing is “eating in their bubble.”

Mak McSweeney was hosting a “Friendsgiving” dinner for her teammates at her off-campus apartment over the weekend on November 14. She said there were 13 girls at the house, including herself.

An altercation with her neighbor took place, ending the gathering early.

McSweeney said she didn’t think anything of it – until she got called into an emergency meeting with university leaders.

“I was called in. Within five minutes, I was dismissed from the school, the university entirely,” she said.

News 3 obtained a copy of her dismissal letter. University leaders say “the gathering violated the terms and regulations of the University’s efforts to mitigate the effects of COVID-19.”

Other players who attended the gathering are also facing consequences, including sophomore Jessica Jennings.

“Because it was not at our house, we were only going to be suspended on housing for January term and spring semester,” she explained.

Jennings, who is from Hampton Roads, was given just a couple hours move off campus.

But that task was harder for other players.

“There were kids that were on the road crying driving; parents stressed,” said Mary Jennings, Jessica’s mother. She has so many questions and called it “just devastating.”

She and other parents scheduled a meeting with school leaders to “help understand why such a hard sanction,” but Mary Jennings says they didn’t join the Zoom call.

Jessica Jennings says they are always together.

But the school says there are strict protocols in place for practices.

Jessica didn’t think going to a Friendsgiving would have consequences on and off the court.

“I never would’ve thought that it would be taken away from me,” she said. “This is my dream. I love Virginia Wesleyan. I came there because the coach promised she was going to take care of me.”

The students are also suspended several games. The university says the team will forfeit a December game against Old Dominion University "because we are unable to field a game safely.”

As for Mak McSweeney, who was expelled, she is focused on making sure grad school credits will count and being reimbursed. Her mother says they are working on an appeal.