A season ago, there was tragedy. This year, a star went down, but the season ends with a championship.

Baylor, the top overall seed of the women’s NCAA basketball tournament, has won its third national title, defeating No. 1 seed Notre Dame 82-81 at Amalie Arena in Tampa, Florida on Sunday. It’s Baylor’s first title since 2012, which also came against the Fighting Irish.

Baylor led by as many as 17, but after an injury to Bears star forward Lauren Cox, the Irish clawed back to take the lead with 3:09 left.

But Baylor regrouped, as Chloe Jackson, who led Baylor with 26 points in her final collegiate game, hit what turned out to be the dagger with 4 seconds to go.

Arike Ogunbowale, the star in last year’s title game, was fouled with the Irish trailing by two with 1.9 seconds remaining. But unlike her clutch shot to win the championship last year, there were no heroics this time. The senior missed her first free throw, and then she made the second despite intentionally trying to miss. She finished with 31 points.

“It’s tough,” Ogunbowale said. “You can’t really do anything about that one.” 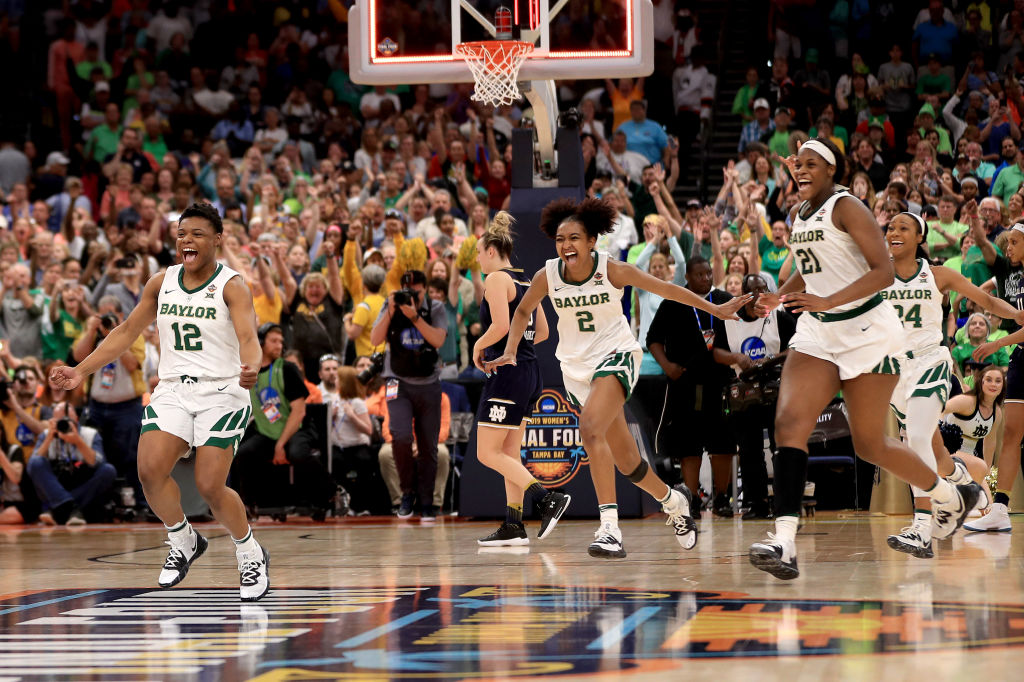 Jackson, a graduate transfer who previously played at LSU and had never played the point guard position until she got to Baylor, was named the tournament’s most outstanding player.

“My teammates and my coaches believed in me so much,” Jackson said to ESPN. “And we had to do it for LC. She got us here. We had to finish the job for her.”

A hobbled Cox — who had to leave the game in a wheelchair — was able to return to the court before the game ended and got to hoist the trophy with her teammates.

“Lauren Cox, my god, she’s the heart and soul of our team,” Baylor head coach Kim Mulkey said through tears to ESPN. “And I just know she’s hurt because that kid would have gotten up. … I just know when you lose a big-time player in the middle of a national championship, you’re not supposed to win.”

The three titles put Mulkey behind only Geno Auriemma, who has 11 at Connecticut, and the late Pat Summitt, who had eight at Tennessee.

The Bears (37-1) have won 29 consecutive games, last losing at Stanford in December.

Of Mulkey’s three titles, it’s the second time that Baylor head coach is sharing it with her daughter. In 2012, Baylor went 40-0 when Makenzie (Robertson) Fuller was a guard on that title team. She’s now in her fourth season on Mulkey’s staff, serving as associate director of basketball operations.

In November 2017, Fuller lost her unborn child, Scout Marie. The stillborn infant was delivered after doctors didn’t detect a heartbeat during a weekly checkup, according to CNN affiliate KWTX. Scout Marie was believed to have Turner’s syndrome, a condition that affects only females, in which one of the X chromosomes is missing or partially missing.

“I don’t think it’s any secret that we had just a horrible year with the death of a grandchild, yet I don’t think as a family, I’m talking about Makenzie and myself, we had time to grieve,” Mulkey said after Baylor’s win against Oregon in the Final Four.

In October, Fuller gave birth to a son, Kannon, who Mulkey had with her on the dais after Friday’s win and on the floor Sunday after winning the championship.

“You bet I’m going to hang onto him,” Mulkey said at the time of Friday’s win. “Holding a child up here is a heck of a lot more touching than holding one right here that’s deceased. I’ve done both in the last year and a half.”

Last year’s title run by Notre Dame was a shock. The Fighting Irish had more ACL tears (four) than losses, and those injuries last season left Notre Dame with just seven scholarship players. And the way they won in 2018 was breathtaking, with buzzer-beaters by Ogunbowale in the semifinal and championship games against Connecticut and Mississippi State, respectively.

This year was different. The No. 1 seed Irish (35-4) returned several of their players from that championship team. They were the preseason No. 1, something that made head coach Muffet McGraw uncomfortable. It’s something she alluded to before Sunday’s final.

On Sunday, she called the loss “frustrating.”

“Well, I’m sad for the seniors that we came that close after getting down 17, clawing our way back,” McGraw said. “We had so many missed opportunities both ends of the floor. … We just didn’t come out ready. That was disappointing.”