CHESTERFIELD COUNTY, Va. – Dozens of students were aboard a Chesterfield County School bus when it slid into a ditch after school Tuesday afternoon at Otterdale and Duval Roads, according to Chesterfield Fire and EMS spokesperson Lt. Jason Elmore.

The bus was transporting students from Grange Hall Elementary.

“Another Chesterfield County middle school bus was passing by and kind of forced them off the road because it was either a head on collision or go off the road
into a ditch,” said parent Melissa Phillips.

Phillips was waiting at her son’s bus stop when another parent got a call from her fourth grader that there had been an accident.

“Says we’re in a ditch, the bus is in a ditch and then the cell phone gets cutoff.” Phillips said.

Phillips got in her car and came upon the accident.

“When I pull up the kids are still on the bus some of them are hanging out of the window with the bus completely sideways one tire is on the road so it’s unstable,” said Phillips.

Some students were evaluated for bumps, bruises, and heat related issues. There were no reported injuries, according to Chesterfield County Schools Spokesperson Shawn Smith.

All students and parents have been reunited.

Some parents complained of a long response time for medics to arrive at the scene.

Elmore said EMS arrived at the scene 23 minutes after dispatch despite having to work around nearby road construction on Otterdale.

In addition, Elmore said the first EMS unit to arrive was the second due unit, meaning it was not the station that would handle accidents at that intersection.

That crew was already out on a call.

“I’m concerned that this road is too small for it to be safe for this traffic let alone all the buses,” Kasey Terrill, who lives on Duval Road, said. 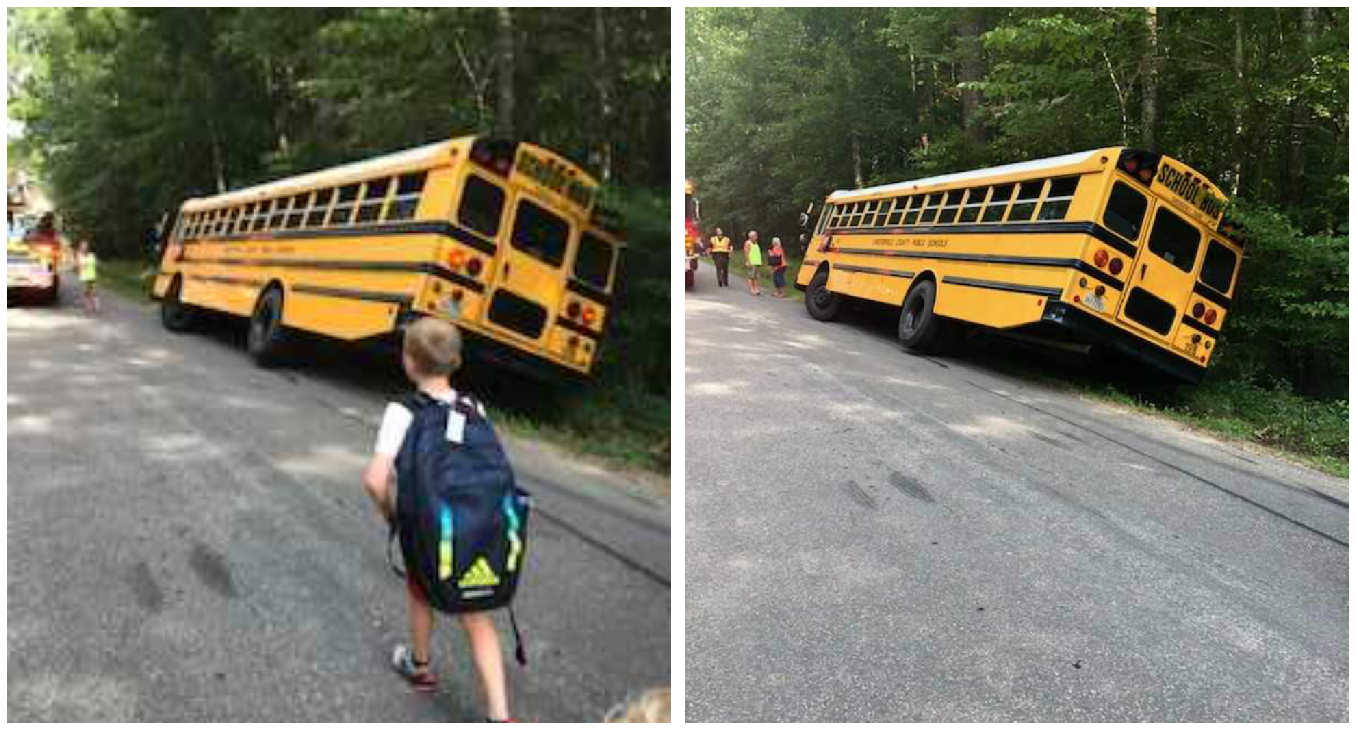 Duval Road is a temporary detour for two nearby construction projects off Otterdale and Genito roads.

Terrill said she alerted the school system, Chesterfield County, and VDOT that the road cannot safely accommodate the added traffic.

“Duval is such a dangerous road anyway, speed limit is 45, it’s hardly marked, there’s some really deep curves,” she said. “They’ve told me 'no safety concern we’ll keep an eye on it.'"

“As cars are flying past, even two vehicles are hard to pass, so two buses can’t pass by, so they’re forced off of the road and it’s something Chesterfield knew about, but didn’t take our concerns into their thoughts and the safety of our children until something like this happened,” said Phillips.

Terrill said there were several close calls Tuesday morning and she sent pictures to Chesterfield school leaders pleading for a safer alternative.

“I was appalled at the 50 to 60 times amount of traffic, " said Terrill, “I sent pictures this morning of buses almost being run off the road.”

“I’m really angry that I’ve spent a majority of my summer trying to make you hear me and here on the first day of school this happens,” she added.

Phillips said she would drive her son to school until she felt he was safe.

“I will be late to work so my child won’t be on a bus if I can’t trust they have my child’s safety at heart,” said Phillips. “We will keep speaking up until they change. These are our children their lives are what matters most and we will be heard until changes are made,” she added.

Some parents said they were never formally notified about the accident by Chesterfield County Public Schools .

“We never received a message from Chesterfield County to let us know our children had been involved in an incident,” said Phillips. “The principal did a great job and arrived on the scene, I believe before police, and helped direct the children to safety and a house, That was cool. But I have not heard from Chesterfield at all and our concerns don’t seem to be heard.”

The CBS 6 Problem Solvers reached out to Chesterfield County schools about the parents’ concerns.

“Regarding the note about parent communication, the school communication narrative you have been provided is not accurate—the Grange Hall ES principal was actually one of the first people on the scene, well before even Fire/EMS and police. The principal met with each parent on the scene when they came to pickup their child,” said Smith. “Regarding the accident itself, our transportation department is working with Chesterfield County Transportation to see what alternative transportation routing options are available until they complete their construction work. (FYI, regarding Duval Road, our bus has to go on Duval Road at some point to pickup the children that live on that road.)”