No arrests or injuries at Jefferson Davis Monument protest

RICHMOND, Va. -- A protest on Monument Avenue ended with no injuries and no arrests Sunday afternoon, according to Richmond Police.

The rally was organized by the Virginia Task Force III% – Dixie Defenders at the Jefferson Davis statue and scheduled for noon until four Sunday. They were supported by the CSA II: The New Confederate States of America group from Tennessee, who have another rally planned in Richmond in September.

Chelsea Rarrick with Richmond Police said there were no arrests or incidents and the pro-Confederate group left around 3 p.m.

There were about 16 protesters compared to the dozens of counter-protesters who arrived earlier to organize at the base of the Davis statue.

The Confederate group's leader, a man who identifies as Boogie Man and the group's president commander, said their counterparts were misinformed of their intentions.

"This has nothing to do with race. It’s all has to do with heritage and history," he said.

The protest was organized after Mayor Levar Stoney's Monument Avenue Commission recommended in July that the Davis statue be removed and signage to be added to the other monuments. 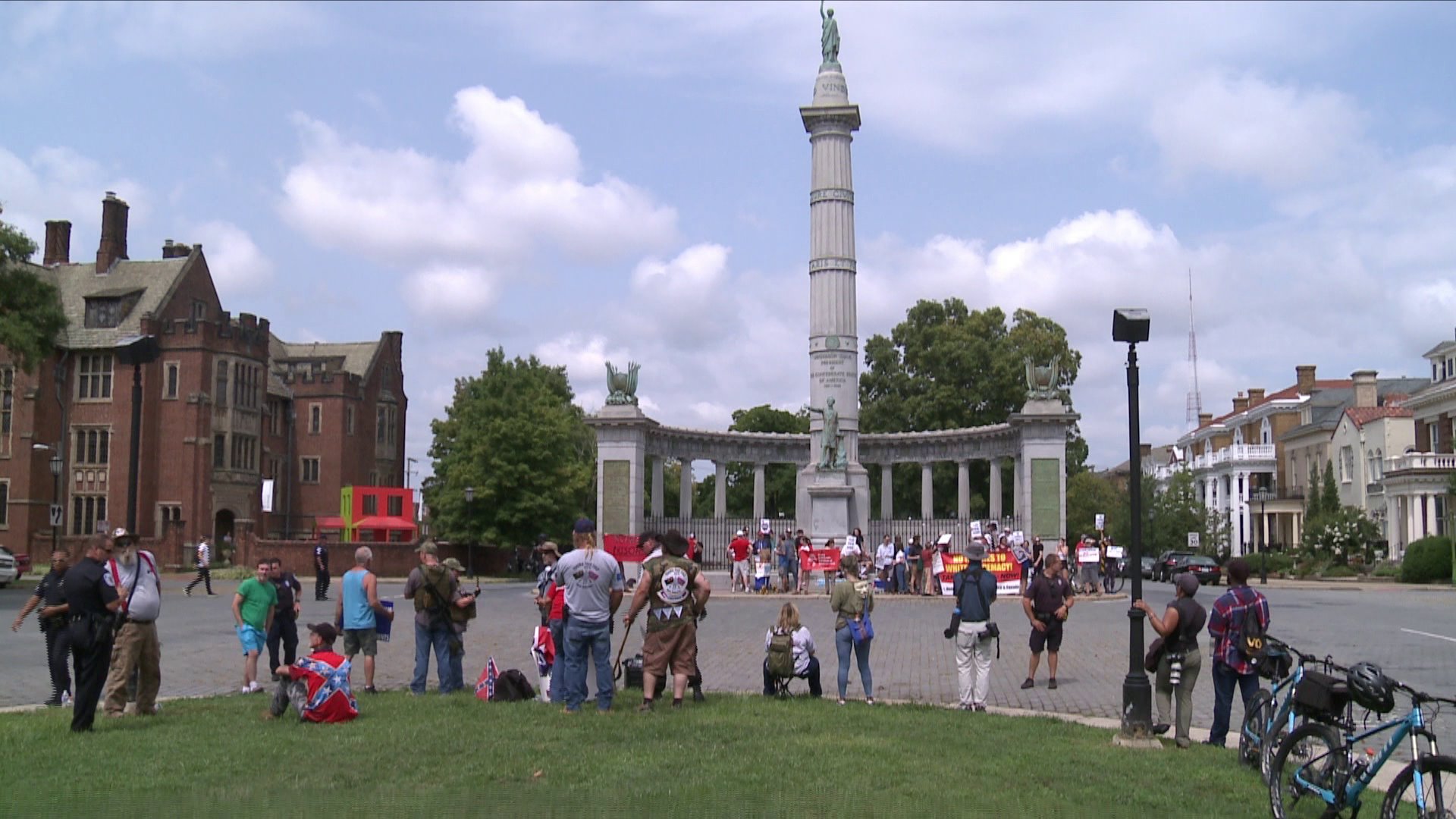 The commission was established by Stoney just days before a Unite the Right nationalist rally erupted in violence in Charlottesville killing one person and injuring dozens. After Charlottesville, Stoney expanded the scope of the commission to consider removal and/or relocation of monuments. He expressed his personal belief that the monuments should be removed and/or relocated.

“Of all the statues, [the Davis statue] is most unabashedly Lost Cause [sic] in its design and sentiment,” the commissioners determined in a 117-page report, after a yearlong review and public engagement process examining the Confederate statuary of Monument Avenue. [READ: Monument Avenue Commission’s complete report]

CSA insists that these events are not hate events, and that acts of hatred won’t be tolerated.

"Go home nerd," one counter-protester yelled at a Pro-Confederate who walked across the street to engage their group.

Fan District resident Goad Gatsby, who said he was not part of any group, said he sees the Davis statue as a symbol of harmful ideals of years past.

"This statue is a symbol of not just the Confederacy, but also to Jim Crow and white supremacy," Gatsby explained.

A large number of officers kept their presence known as they were stationed with each group.

No one arrested or hurt at today's Pro-Confederate protest at the Davis Statue in #RVA.

"We are protesting our right, our heritage" one protestor told me, but counter-protestor says monuments should come down as symbols of white supremacy @CBS6 pic.twitter.com/nhedkWQVd0

The CSA event planned for September 15, from 10 a.m. to 4 p.m., will be their fourth rally in Richmond. The group wrote on Facebook that they are honoring the one-year anniversary of their last event.

Neither group had a permit. The CSA group encouraged folks to bring flags but emphasized the flags on poles and signs on sticks are not allowed.

The display comes after the pedestal base of the Robert E. Lee monument was vandalized with spray paint early at some point early on Saturday, August 4.

The damage, police said, was extensive enough to warrant a felony charge. They said they are ramping up their presence around the monument to prevent further attacks.

Additionally, a $1,000 reward is being offered for information that leads to the arrest and conviction of the person or people who vandalized the statue of the Confederate general.

“While we respect the rights of people to speak freely, this was a case of vandalism, plain and simple,” Capitol Police chief Col. Anthony S. Pike said. “It crossed a line into criminal activity, and it will not be tolerated.”

The Department of General Services, who offered the reward, paid $4,400 to get clean the red paint off the west and southwest sides of the monument’s pedestal.

Anyone with information is encouraged to call the Capitol Police dispatch center at 804-786-2568 and ask to speak with the investigator on duty.