RICHMOND, Va. -- Richmond is experiencing growth not seen in decades. As neighborhoods like Scott's Addition are exploding in popularity, home values are rising rapidly.

And the drastic changes are having an impact on the already thin affordable housing market.

At 31 years old, Shante Williams describes her life as an uphill battle.

"My parents have been deceased since I was 16," Williams said. "I kinda have been on my own for a long time."

With no real safety net to fall back on, the single mother raises two boys as she tries to better her life one day at a time.

But her journey has not been easy. In fact, before she moved into public housing, she said she was in a "homeless situation."

While living in public housing at Gilpin Court, Williams worked in child care and went to school part time, and said she made enough money to afford to pay $650 for a two-bedroom unit.

"I went from making $8 an hour in child care into getting into a leadership position where I was making $15 an hour," Williams explained.

Affordable housing off Chamberlayne Ave. that was in cited for terrible living conditions, and the owner taken to court by the City of Richmond.

However, she didn't have a car and needed one, so she scraped together the money to buy one.

"That didn't work. Car broke down on me," Williams said. "Car ended up getting repossessed."

When that happened, her situation went south fast.

"Where the fall came with me losing the car, inadvertently losing the job, not being able to pay for childcare adequately, because I couldn't get back and forth to work regularly," Williams said. "Kinda got behind in rent, even living in public housing, got behind in rent to the point where I ended up getting the eviction."

Her story highlights a common problem in the Richmond region: people living on the edge, barely able to afford a quality place to live.

"What we see is a lot of families whose income is at minimum wage that income is, I think on an annualized basis, is less than 15,000 dollars a year before taxes," Greta Harris, the CEO of the non-profit Better Housing Coalition, said. "And so you have to pay rent, pay for transportation, food, medicine, daycare, etc, and it's just not enough to make ends meet."

The Better Housing Coalition develops quality affordable housing in the Richmond area, including the Lincoln Mews apartments on the Northside where Williams eventually landed.

"I think some of us have been beating the drum for a long, long time that this is an issue," Harris said.

In fact, a 2015 report released by the Partnership for Housing Affordability found that roughly 35-percent of households in the Richmond region are cost burdened, which means they pay more than 30-percent of their income for housing.

"General rule of thumb, regardless of your income, you shouldn't be paying more than 30-percent towards housing cost," Harris said.

But Harris said affordable housing in good condition can be difficult to find.

"As more people are coming in and actually moving in to downtown, there is just less inventory of what used to be affordable. We are seeing a lot of loss of existing affordable rental property being converted to market-rate pricing," Harris aid. 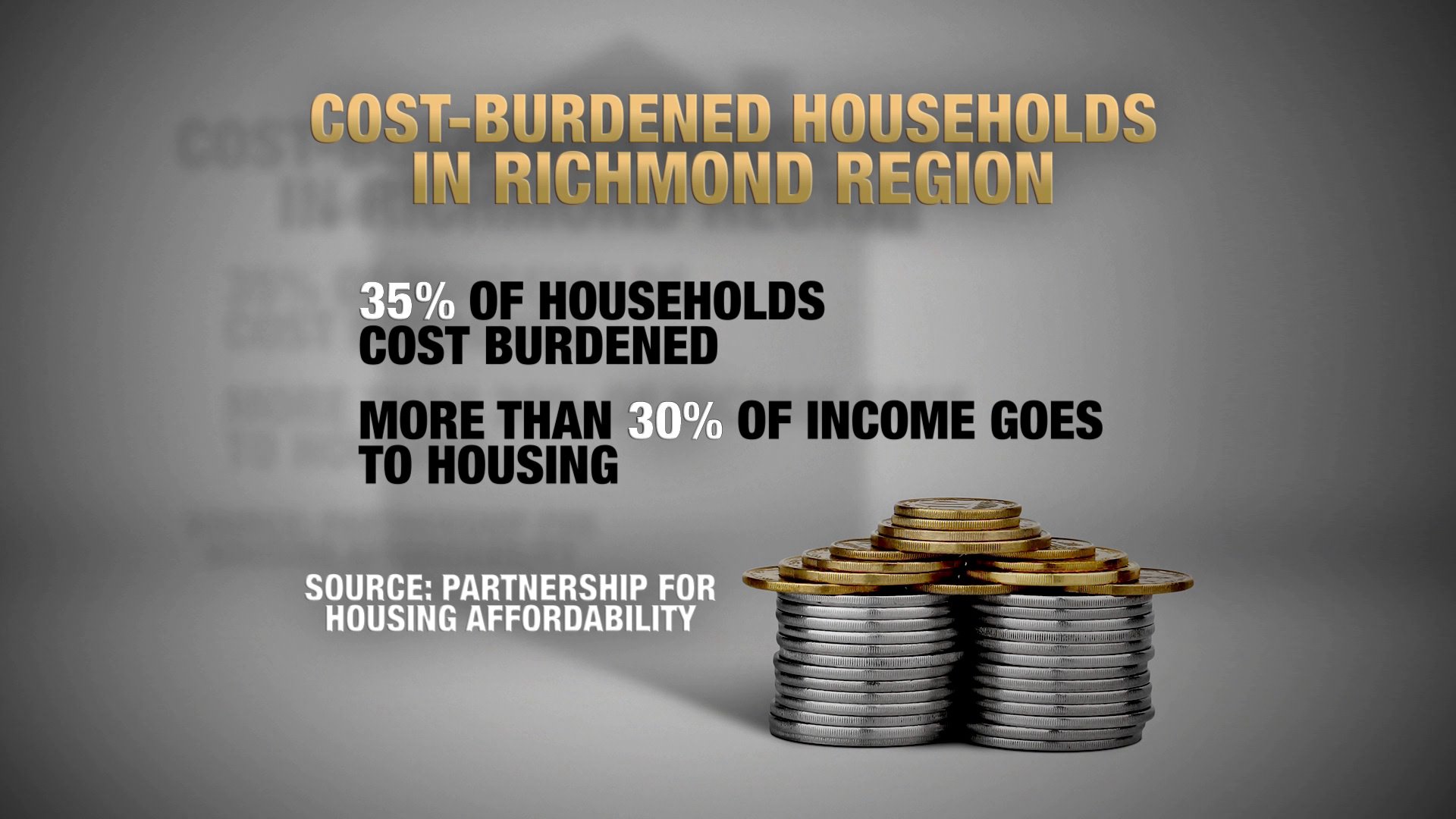 And, Harris admits some of the affordable housing that does exist, such as The Flats at Ginter Park where the city condemned many of the units, are in disrepair.

According to the Partnership report, the area needs 15,000 more units that are affordable to folks making 50-percent of the average median income, which for a family of four, is roughly $36,500.

Plus, a lot of times, residents who don't need affordable housing fight it being built in their neighborhood.

For example, a man in Powhatan County who spoke out against a low-income apartment complex there at a Feb. 26, 2018 Board of Supervisors Meeting.

"You get a call one day and it said your granddaughter had been raped between the school and the apartments, she could have her throat cut and be laying in the creek dead. Ya'll need to think about this before you vote yes," the man said.

"When we're going in and doing quality housing at an affordable price, that's the NIMBY or "Not in my back yard" that we get for every development that we do," Harris said.

Still, the Better Housing Coalition persevered in developing 2700 affordable housing units in the area over 30 years, and Harris is more hopeful than ever that elected officials and the people they represent will get behind legislation that favors affordable housing.

"We have a little stack of ordinances that would really help streamline and facilitate more affordable housing moving forward," Harris said.

Changes that Harris believes would help more people like Shante Williams and her kids live a happy and healthy life.

Harris said some of the ordinances she is pushing for involve incentivizing affordable housing, and, in some cases, mandating it, but she said the General Assembly would have to make some legislative changes first before local officials could act.