CHESTERFIELD COUNTY, Va. -- Relaxing in her twilight years, Miss Bertha sleeps a lot, and cannot remember much about the last 95 years of her life.

Bertha suffers from dementia causing her to forget the decades she spent as a nurse, and the names of her six children.

“That’s probably thousands of people that she took care of, and now when she needed to be taken care of, I feel like I let her down,” Garbo said.

Garbo said she failed her mom when she placed her in Brookdale Midlothian, an assisted living facility in Chesterfield, back in February.

"I feel like I let her down,” Garbo said of sending her mom to Brookdale Midlothian.

“I was led in by the sales pitch…it sounded great,” Garbo said.

“They did an assessment on my mom to make sure she fit, she did, so I moved my mom there in the beginning of February,” Garbo said.

But, Garbo said just 12 days after moving in, her mom had to be rushed to the emergency room after tripping and falling while using her walker.

“This is a picture of mom, you can see the nose is smashed, so is the forehead, the mouth is cut up,”

“This is a picture of mom, you can see the nose is smashed, so is the forehead, the mouth is cut up,” Garbo said while showing CBS 6 reporter Melissa Hipolit a number of pictures of her mom’s bruised and bloodied face and head.

Garbo said her mom fell at least 12 times in the 11 weeks she lived at Brookdale, and ended up in the ER five times.

“She ended up with black eyes and a huge cut on the head,” Garbo said.

“You understand she probably will fall?” Hipolit asked Garbo.

“She can, but there are measures that can be put into place that can lessen the severity or lessen the frequency,” Garbo responded.

“And you don`t think they did that?” Hipolit asked.

On top of that, Garbo said when she visited her mom Easter morning; she found her lying in her own urine, completely alone, with no caretakers in sight.

“Now here is my mom, a fall risk, they have her alone in bed, no preventative measures around her, and she is laying there all wet and nobody is checking on her,” Garbo said.

Warning some may find the graphic images disturbing 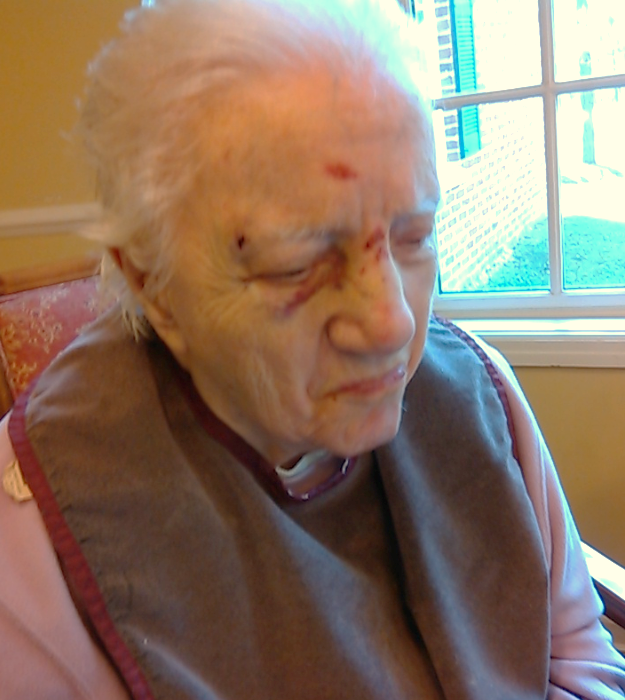 Garbo said she repeatedly met with staff at Brookdale, including the Executive Director Jeff French, to talk about ways to remedy the issues.

Finally, Garbo said French told her that she would have to pay for a 24/7 caregiver, or the facility would move to discharge her mom.

“I thought really, you folks haven’t done anything you said you were going to do, but now it’s up to me to pay for the caregiver instead of you hiring more staff,” Garbo said.

Garbo contacted the state office for Long Term Care Advocates who tried to help resolve the situation, and she ultimately decided to move her mom to a new assisted living facility.

That happened in April, and Garbo said since then, there have been no emergency room visits.

“It is so much better, it’s a night and day difference. These folks really know what they’re doing. They spend a lot of time with my mom, they call me on a regular basis,” Garbo said.

Carol Garbo and her mother Bertha enjoying time at her new living facility.

Garbo told CBS 6 she later filed a complaint against Brookdale Midlothian with the Virginia Department of Social Services, and she’s not alone.

CBS 6 found DSS records that show 8 complaints have been lodged against Brookdale Midlothian since September of 2013, and 59 violations have been found since April of 2012.

“I would think the staff needs a lot more training, and a lot more staff, and they need to start looking at people instead of the bottom line,” Garbo said.

We were turned down, but were sent the following statement from Dana Schroering, a Senior Communications Specialist at Brookdale Senior Living Inc.

“We understand the fall risk associated with our residents as they age. We provide associates with the appropriate training needed to evaluate each resident’s fall risk and strategies to assist in prevention. Even with the most proactive approach to fall management, unfortunately, older adults experience falls in any home-like environment. When this occurs in our community, we frequently work with doctors, nurses and staff for prevention alternatives.

We work closely with state authorities to meet the high standards and quality care our residents and their families expect from us and will continue to do so in the future.”

But, we wanted more specific answers, so we went to see French at Brookdale Midlothian.

French was polite, but would only refer Hipolit to Brookdale’s corporate office.

“It’s been reported up, so the PR team has, I guess, has communicated what they feel was necessary to communicate,” French said.

One local nursing home did open its doors to us.

“Care starts and ends with the staff,” the President and CEO of Westminster Canterbury, John Burns said.

And, while his facility is one of the more expensive in our area, Burns said there are certain things every nursing home should offer, regardless of price.

“You walk into a facility, you should see staff.  It doesn't matter if it’s brand new facilities, or if it`s freshly painted, the care that happens in there is really about the people that work there, and the supervision that occurs there, and the management of the organization,” Burns said.

Burns said you need to do your homework before you send your loved one anywhere.

And, Joani Latimer, the Long Term Care Ombudsman for the Virginia Department for Aging and Rehabilitative Services, said her office can help.

“Talk to your local ombudsman, talk to your area agency on aging, those folks have some direct knowledge of facilities and long term care services in their community… do more than just the marketing tour, visit several times if possible,” Latimer advised.

Garbo said she thought she had done enough research, but now realizes that just was not enough.

“Someone has to advocate for these people, they`re not able to do it anymore, so someone has to step up,” Garbo said.  “If the situation was reversed, there is no doubt in my mind my mom would be there for me.”

The Virginia Department of Social Services confirmed to CBS 6 that they are investigating a complaint at Brookdale Midlothian.

Also of note, days after Carol Garbo contacted us; she received a confidentiality agreement in the mail from Brookdale Senior Living.

She showed it to Hipolit, and it said Brookdale would forgive the roughly $2,000 she owes them, if she agreed to never speak about Brookdale or the proposed settlement.

Garbo said she has no intentions of signing that document.

We found this isn’t the first time Brookdale Senior Living, the company that owns Brookdale Midlothian along with more than 1,100 senior living communities across the United States, has been in the news.

Last year, they were named in a class action lawsuit in California.

The settlement alleged Brookdale and a senior living company it acquired in 2014, misrepresented its staffing levels and charges for individual care at more than 70 facilities in the state.