RICHMOND, Va. -- A powerful line of storms that triggered tornado and severe thunderstorm warnings across Central Virginia Thursday night downed trees and knocked out power to more than 150,000.

People are sharing their photos and videos of what CBS 6 Chief Meteorologist Zach Daniel calls a "historic wind event."

‎Stephanie Minneti‎ in Hanover County said her husband was out patrolling the roads after the storm and snapped a photo of a downed power line across a road.

Large tree down on St Charles near East Parham ( our neighborhood exit street) and also at the next light. They're too big to clear.
Back during Hurricane Katrina he learned the exact route of the power lines to the Lakeside power station. So he followed them until we found two places where the lines are down. One is across the road and two trees that are about a 5-foot diameter both went down One in one direction on the side of road and one in the complete opposite. So we were able to report those locations to the police. Now he is clearing a different road with his axe.
We will probably be without power for more than a week. I have never seen so much damage and so many trees down before. This had to have been a tornado or microburst.
Metal garage in the middle of Wilkinson and Chamberlayne Ave
Brookside and Noble has big LINES DOWN ACROSS ROAD. TWO 5 foot or larger diameter trees down across cars/home.
Danray and Ridge. LINES DOWN. LARGE TREES ACROSS MANY ROADS.
Trees across lines on right side of house at 503 Danray Road
More lines across road at Brookside and Chamberlayne Ave. Not Chamberlayne Ave Road /301.
Widespread destruction and NO POWER through Chamberlayne, 95, Route 1, Lakeside, 301, Parham.
DGIF (his work) behind St Joseph's Villa is on generator. No power throughout entire area.
Walmart and Food Lion by Brook Road/Parham have NO POWER also.

Power line down in Henrico County

Xine Bouthillier said she had a number of trees down where she lives.

"We have trees and limbs down but it's the mangled mess of power lines and downed power poles that worry me. Lines laying in the streets all around me and power lines laying in my yard as well as several neighbors. What a mess!"

Anne Walker Durrett posted this photo of a tree down in the The Village neighborhood at Innsbrook in Henrico County.

Tree down at The Village (SOURCE: Anne Walker Durrett)

Beverly Mahone Rogers‎ said the storm damaged a tree in her backyard in Mechanicsville.

"Mostly all that is left is the trunk," Rogers said. "A very large portion was ripped off and landed between my house and my neighbor's house. We are so Blessed! This could have been really bad."

Tara Lane shared this photo of a tree that snapped in half at her home in Henrico County.

"Willow tree down across our street too," Lane said. "Hope our neighbors are all alright."

Tree down, blocking all of Michael Rd & bringing down pwr lines in West end. Neighborhood is dark & smells piney. pic.twitter.com/0uP54fLEGB

All lanes of Parham blocked at Yolonda, multiple power lines down and tree down across road. Power out all around. pic.twitter.com/nW6Zqg90Wj

Hearing a few generators and I swore I heard a chainsaw in the distance. Trees down everywhere. Many roads blocked in west end.

Watch out driving down Broad there is a big old tree near Hermitage pic.twitter.com/DMYETKmrCz

The below video, taken by Nic Ki at 9:40 p.m. at Short Pump Town Center in Henrico County, shows pounding rains and heavy winds.

Kristen Salmon‎ sent the below video to WTVR CBS 6 at 9:32 p.m. She recorded the video in Rockville, which is about 10 minutes west of Short Pump.

"No hail but lots of rain and wind," she wrote.

Shannon Guss‎ said she captured the below video while she was stopped during torrential rain while on I-64 near Route 288.

Do you have damage to report where you live? Click the "submit your photo" button below or add it on the WTVR CBS 6 Facebook page. 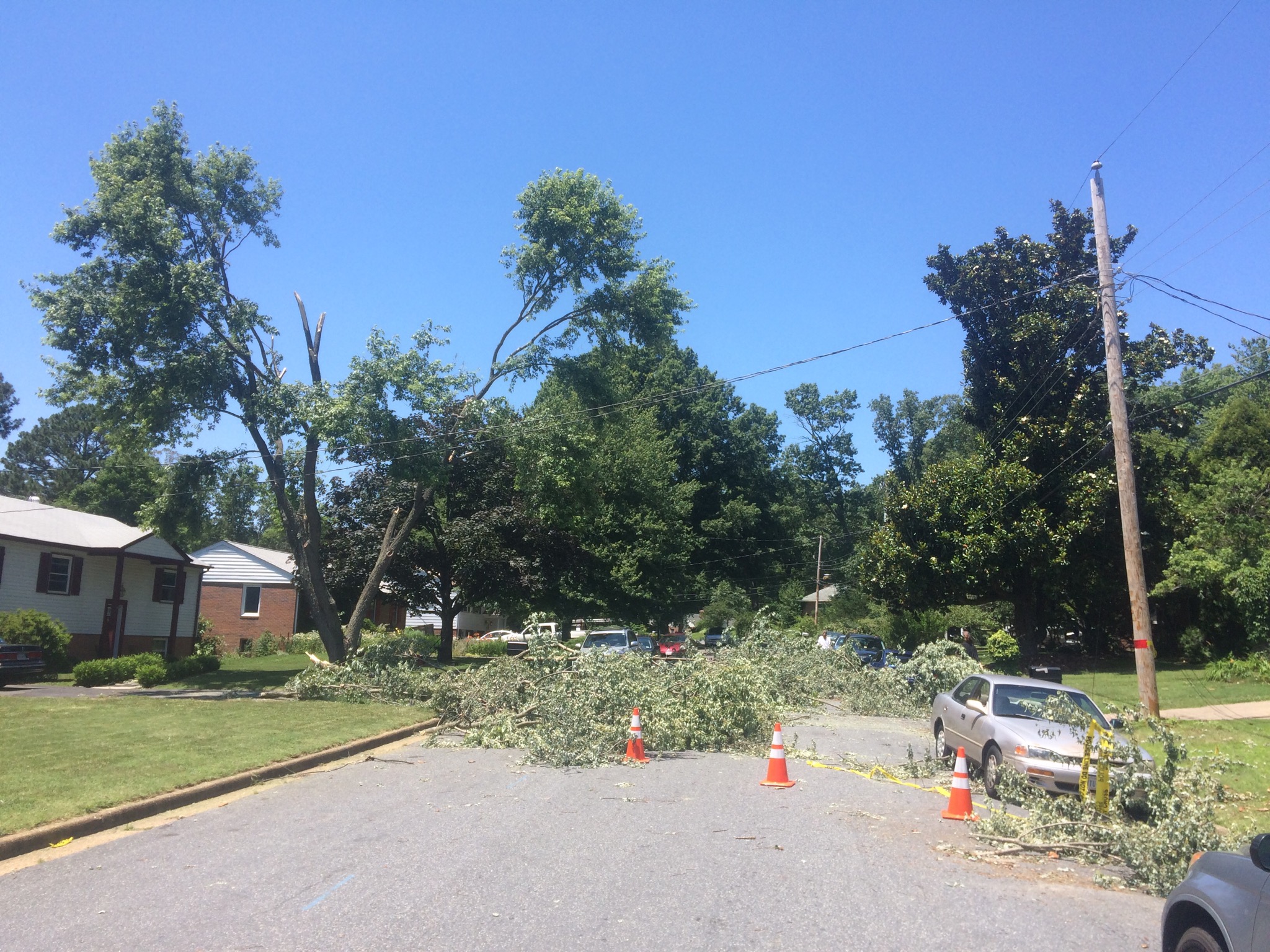