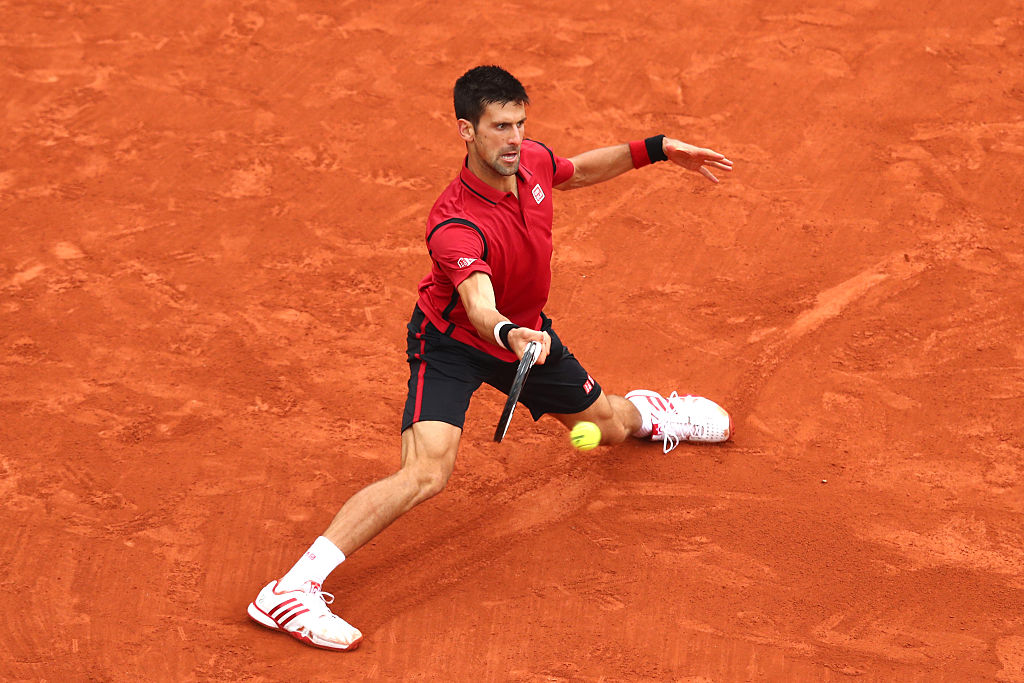 PARIS — The first man since Rod Laver in 1969 to win four straight grand slams. The eighth man to complete the career grand slam. The first man to claim the first two majors in a calendar year since Jim Courier in 1992.

Novak Djokovic made plenty of history Sunday when he beat Andy Murray 3-6 6-1 6-2 6-4 in the French Open final.

Djokovic, especially in the past two seasons, never hid how desperately he wanted to win the world’s premier clay-court tournament. He had lost three finals, including last year to Stan Wawrinka.

When Murray sent a backhand into the net on a third match point, Djokovic fell to the court on his back. Finally the Coupe des Mousquetaires was his.

The crowd on Philippe Chatrier court roared their approval. Never before in a grand slam final had Djokovic been so loved.

He duly drew a heart into the clay with his racket, mirroring Gustavo Kuerten’s celebration when the Brazilian won the French Open in 2001, and dropped himself in the middle of it. Kuerten looked on, seemingly approving.

Serena Williams — upset by Garbine Muguruza in Saturday’s women’s final — came within two matches of achieving the calendar-year grand slam in 2015 and given the Serb’s form, who would bet against him being in the same position in several months in New York?

Murray fell to 2-8 in grand slam finals and 2-13 in his past 15 matches against his childhood friend, but he’ll likely depart Roland Garros in good enough spirits once the dust settles. No British man had made a French Open final since Bunny Austin in 1937.

Less than two weeks ago, Murray came within two points of losing in the first round to Radek Stepanek, and he was also stretched to five sets by Mathias Bourgue in the second round.

His play during the clay-court swing bodes well for the grass and Wimbledon, which starts in three weeks.

Murray, in a classy move, showered Djokovic with praise during the trophy presentation.

“This is his day today,” Murray told the crowd. “What he’s achieved in the last 12 months is phenomenal. Winning all four grand slams in one year is an amazing achievement.

“This is something so rare in tennis. It’s not happened for an extremely long time and will take a long time to happen again. Me personally being here, it sucks to lose the match but I’m proud being part of today.”

Djokovic won’t be thinking about defending his crown at the All England Club just yet. He’s sure to be celebrating long into the Paris night.

The celebrations actually began early. Shortly after his victory, dad Srdjan cracked open a bottle of champagne near the player restaurant and hoisted the winners’ trophy with such enthusiasm you’d have thought he won the championship match.

The first game of the affair certainly suggested Djokovic would be difficult to stop.

He played flawless tennis to break at love.

But Murray broke back, not making errors, crunching forehands — traditionally his weaker wing — and going for second-serve returns. It was the type of play his backers have long called for, rather than the 29-year-old counter-punching.

And when he trailed in the first set, his supporters came to his aid, especially when French chair umpire Damien Dumusois controversially awarded a point to Murray at 5-3, 15-0.

Murray blasted a powerful serve down the middle, which was called a fault. But Dumusois inspected the mark and ruled the ball was good. He then, instead of replaying the point, awarded it outright to Murray, saying Djokovic’s contact with the ball came after the call and so didn’t put him off.

Undaunted, Murray served the set out.

Murray manufactured a break point only to see it dissipate.

What happened next? He was broken, contributing two double faults, one on break point.

The complexion of the affair changed for good.

As the set developed, a worrying sign for Murray: Djokovic, the top returner in tennis, got his teeth into Murray’s service games. It would continue until the end of the tussle.

Djokovic’s first show of positive emotion came at 4-1 as he successfully chased a drop shot and replied with an angled forehand winner. A fist pump ensued. Another one surfaced on the next point when he broke with a crushing backhand down the line.

To begin the third game of the third, he muttered, “shut the **** up” to someone in the stands, likely someone in his box.

He must have become more annoyed when, facing a break point, he dumped an easy forehand volley into the net to fall behind 2-1.

Murray was hanging on. And at 1-3, 30-40, Djokovic flashed his tremendous court coverage by scrambling to a drop shot and cutely depositing a backhand winner.

The crowd broke out in song during the changeover.

It was becoming evident that Murray’s five extra hours on court during the fortnight were more significant than Djokovic playing four straight days due to the rain. He had little left physically. Kuerten noticed it.

“For me today it feels like his legs didn’t get going, after the second set,” Kuerten told reporters. “He couldn’t get the same (pace) of the balls and consistency he was doing at the beginning.”

Djokovic broke twice more in the fourth for 5-2.

Murray, however, got to 4-5 and when he registered the first point, the crowd went wild. Now they wanted more tennis. Suddenly, drama surfaced, a contrast to most of the previous 2 1/2 sets.

But on a third, and after three hours of play, Murray’s cross-court backhand found the net.

The final played under cloudy skies after rain for most of the last week, seconds later, the sun finally came out in Paris. For tennis’ current shining light it was only fitting.