SAN BERNARDINO, Calif. — Two suspects died in a gun battle with police Wednesday hours after authorities say they burst into a holiday party at a center for people with developmental disabilities and killed 14 people.

But it was unclear whether the furious shootout with the male and female suspects was the end of a daylong manhunt after the mass shooting at the Inland Regional Center in San Bernardino.

One of the suspects involved in the San Bernardino shootings has been identified as Syed Farook, an inspector with the county health department, who abruptly left the event at the Inland Regional Center before the shootings, multiple law enforcement sources tell CNN.

Farhan Khan, the brother-in-law of the suspect Syed Farook, told reporters: “I have no idea why he would he do something like this. I have absolutely no idea. i am in shock myself.” Khan said he last talked to Farook a week ago.

The sources said the residence in Redlands, California, surrounded by law enforcement is connected to Farook. It is that house where the chase began that led to the shootout with the occupants of the SUV.

The sources could not say for certain that he was in the SUV, if he was a shooter, or that he is one of the dead. The sources did say that Syed Farook is known to be a U.S. citizen.

An FBI raid was unfolding late Wednesday at an apartment in Redlands, where authorities were serving a search warrant connected to the shooting.

The violence began around 11 a.m. (2 p.m. EST.) at the convention building at the Inland Regional Center where employees with the county health department were attending a holiday event. Witnesses said at least two shooters opened fire, killing 14 people.

Another 17 people were hurt — many wounded by bullets from automatic-style rifles, some injured in the panic to escape.

The shooters fled in a black SUV, prompting a huge police response in the area.

As the hours passed, the hunt for the suspects continued with a tip taking officers to a home about 10 miles away in Redlands. A vehicle similar in description to the suspect SUV pulled out and a chase began.

The SUV raced back to San Bernardino, with bullets and a device designed to look like a bomb flying from the truck, Meredith Davis with the Bureau of Alcohol Tobacco and Firearms and Explosives told CNN affiliate KCAL/KCBS.

Suddenly, it stopped on a neighborhood street. Residents were stunned to hear the eruption of continuous gunfire. A man and a woman in the SUV were killed in the barrage of bullets that riddled the windshield.

A third person who was caught running near the scene was detained, but police aren’t sure whether he was connected to either shooting.

San Bernardino Police Chief Jarrod Burguan didn’t say how old the suspects were or what race they were. He told reporters they were armed with assault-style rifles and handguns.

The man and the woman were dressed in what Burquan said was “assault-style clothing,” describing it as “dark, kind of tactical gear.”

He wouldn’t say if he knew if they were related.

Hours after the shooting, the Inland Regional Center convention center was still an active scene. The bomb squad was working to determine whether they need to blow up two suspicious devices, one of which appeared to be a pipe bomb.

Survivors of the mass shooting told of hiding in offices, bathrooms and closets, texting their loved ones that they feared they were next to be shot.

In the moments after the initial bloodbath, SWAT teams had scoured the facility, unsure whether the shooters were still there and looking for people hiding from the horror.

Marcos Aguilera received a text from his wife who works at the Inland Regional Center.

“She heard the shots and crying,” he said. The situation became confusing when the fire alarm went off.

“Everyone was confused,” he said, relating his wife’s account.

A SWAT team eventually rescued his wife and two other co-workers. “When she exited the building, she said there were multiple bodies on the floor,” Aguilera told CNN.

The center’s executive director, Lavinia Johnson, told CNN that she believed the county’s Department of Public Health was having a holiday party.

Johnson said the fire alarm went off in her building, and people began to evacuate but then the order came to stay in place.

Later police came and took people out of their offices, marching them into the parking lot with their hands in the air. 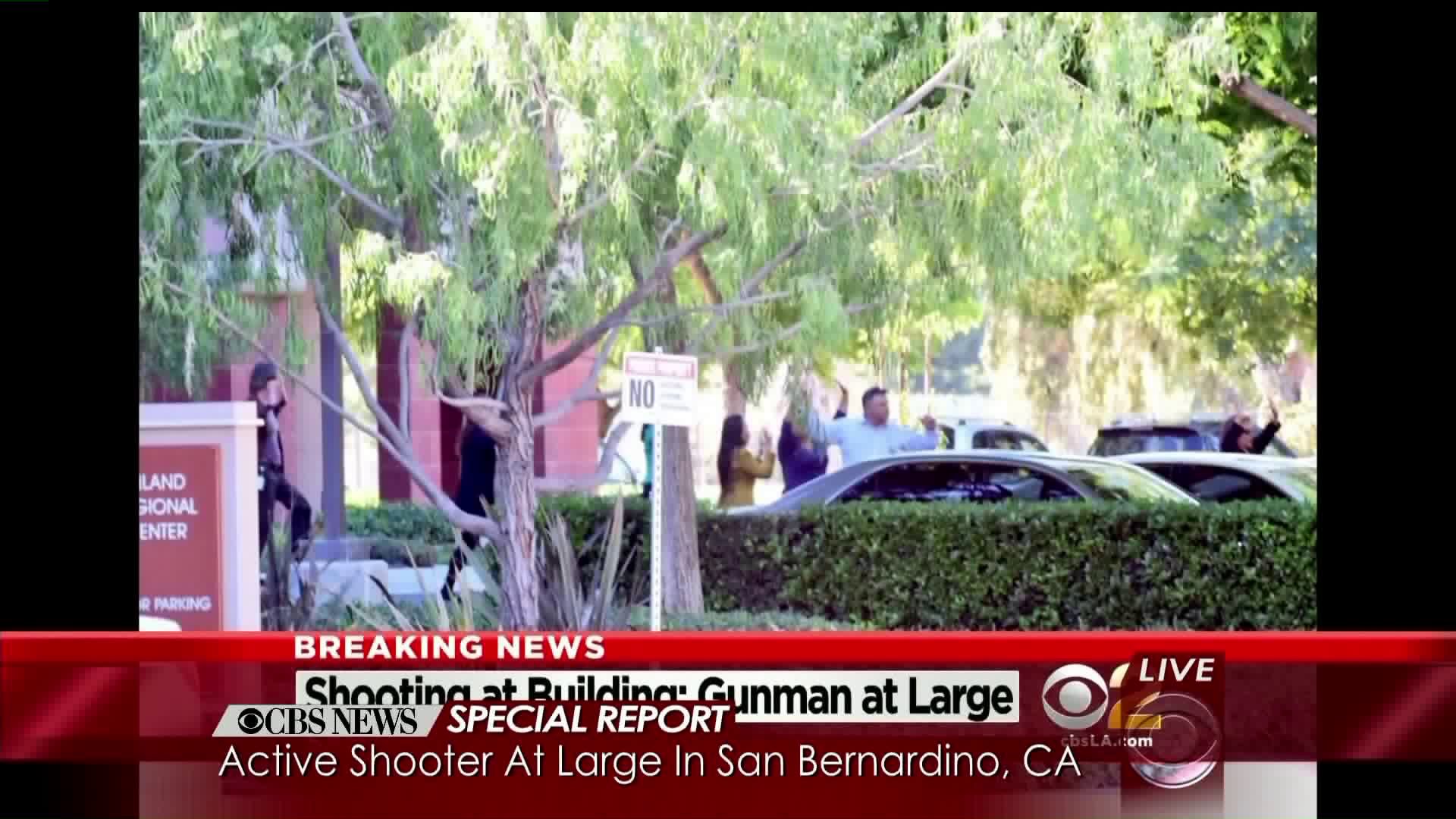 Stay with WTVR.com for updates on this developing story. Visit KTLA.com for up-to-the-minute details on this breaking story.

SBFD units responding to reports of 20 victim shooting incident in 1300 block of S. Waterman. SBPD is working to clear the scene.

Update: San Bernardino police say there are one to three shooters https://t.co/2Cdl5xlNSr pic.twitter.com/5u2klz0B9N

.@SanBernardinoPD and other Law Enforcement agencies are evacuating people from the Inland Regional Center pic.twitter.com/kPU2dbWqV3

About the Shooting Scene

CNN affiliate KABC reported that the shooting took place at Inland Regional Center, a facility for people with developmental disabilities.

It aims to “work on a personal, one-on-one basis with people with developmental disabilities to make their lives better as they define it.”

It is unclear how many people were at the San Bernardino facility at the time of the shooting.

San Bernardino is a city of just over 200,000 people located 60 miles east of Los Angeles.