CHESTERFIELD COUNTY, Va. -- It is a speech that has echoed across the decades.

“Skin may differ. Black and white but we are the same.”

“All the way down to Birmingham, Alabama, Jackson, Mississippi, Greenwood, Mississippi and every other community,” King said.

The historic moment from nearly a half century ago mesmerizes Dr. George Martin.

“I could hear it for the 25th time and a chill goes down my spine,” said Martin.

The educator from Chesterfield recently became the proud owner of a one of a kind recording.

“I’m biased, but I think it is the greatest find in 50 years in America,” said Martin. Martin did not acquire the tape at an auction nor did he uncover the treasure at a yard sale. This rare piece of the past was a gift.

“Maybe it is selfish but I treasure it almost as one would a child,” said Martin.

In 1967, the man who once had a dream also held onto a wish. Dr. King canvassed Cleveland urging voters to help Carl Stokes become the first African-American elected mayor.

During one stop at Greater Abyssinia Baptist Church, Mr. Allen found himself standing next to his hero. John pushed record on his Norelco tape machine.

“I was there face to face with Dr. King. Looking in his eyes. Seeing his soul,” said Allen.

He would capture 23 minutes of Dr. King directing people to stand up to social injustice. But John Allen would stash the tape in a paper bag. Dr. King’s bellowing voice was silenced on a shelf.

Months later history would be made Carl Stokes would take office and Dr. King’s life would end on a balcony in Memphis.

Decades after recording Dr. King’s voice, the 84-year-old would dust off the reel. John presented the tape to his new friend George Martin free of charge.

“That makes me very happy to know that the tape will live on,” said Allen.

Why would Allen simply give his precious recording away no strings attached? John said you can find the answer in a small room in a shopping center in Chesterfield. Every week John’s grandson Aundre joins George for one on one tutoring.

When Aundre, who lives with disabilities, began sessions with George and his wife Ilene at the Chesterfield Learning Center two years ago he did not know his ABC’s. But Aundre was willing to learn. 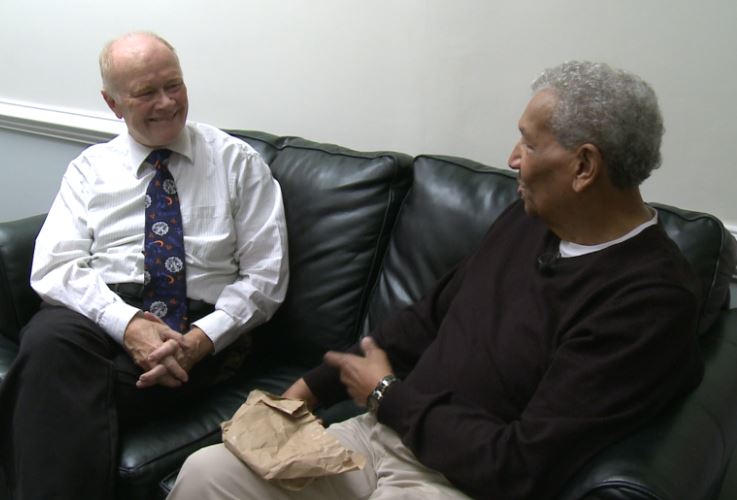 “I love it. I feel like I’m home here,” said Aundre. “Aundre is the most kind and loving young man I’ve ever met,” said Ilene Miller.

Aundre is now reading at a second grade level. “That is as much as someone getting their bachelor and the doctorate, it is a huge step. It really is,” said Martin.

Allen said his grandson’s progress on the inside and out is nothing short of remarkable.

Thanking the man responsible was rather elementary. John would hand over the tape of MLK as a small token of his appreciation.

“I treasure it. I treat it like it’s the Hope Diamond. It is not just the gift but the trust in me,” Martin explained.

But to Allen, the man who has given so much deserves these words from a King in exchange for hearing the words his grandson reads from a book that sound just as sweet.

Aundre and Dr. Martin during a tutoring session

On the recording Dr. Martin Luther King, Jr. said, “If a man hasn’t found something worth dying for he isn’t fit to live.”

“How happy am I? I’m thrilled. I cannot tell you,” said John Allen.

“George? He is cool. He is my new best friend,” said Aundre.

Martin wants to help as many children in Chesterfield as he and his wife can. If he does sell the tape of Dr. Martin Luther King, Jr., which potentially could fetch tens of thousands of dollars, he said the money would be used to pay more tutors and purchase vans to transport students to receive life-changing lessons like Aundre.

As for Aundre, he is working on getting his driver’s license so he can potentially take over his grandfather’s hair products business when he retires.