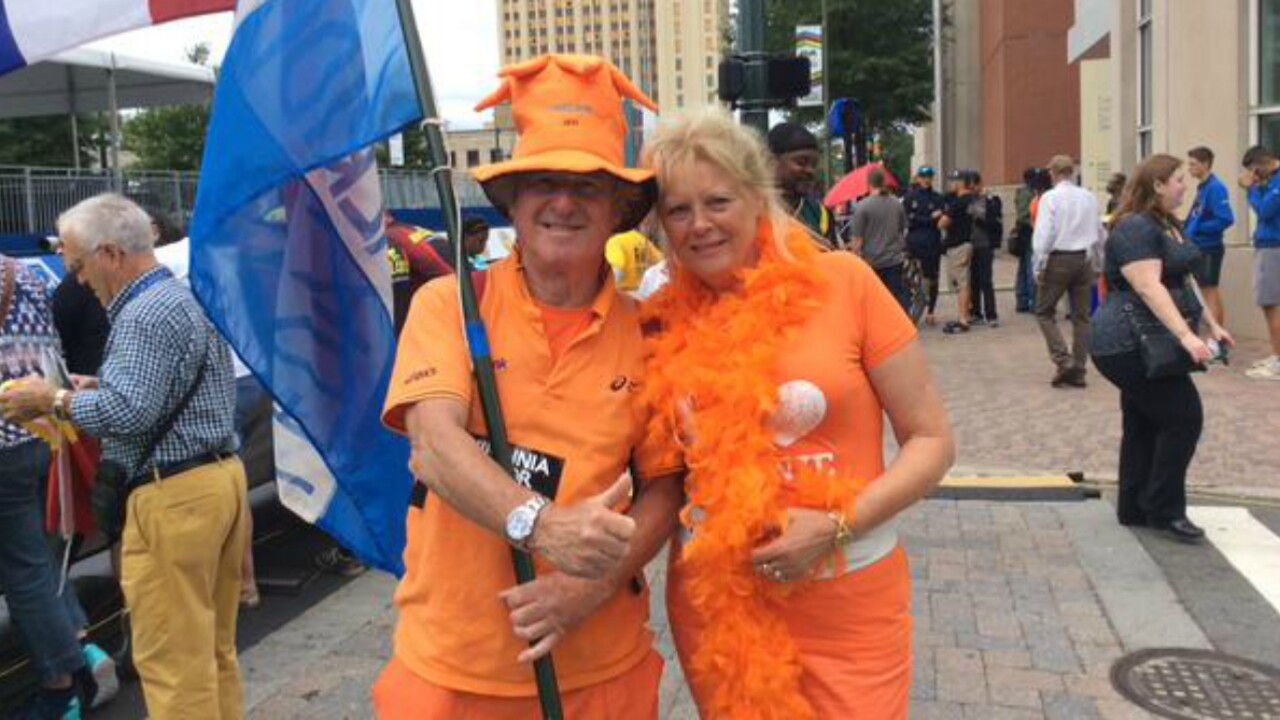 RICHMOND, Va. — Visitors coming from around the world to watch the UCI Road World Championships are full of praise for Richmond.

“Richmond is beautiful. It’s very big,” Martina Deved, a cycling fan who along with her husband Hendrik Broeskan flew from Rotterdam in the Netherlands to attend the race, said. “All the cities in Holland are very small. But the city is absolutely beautiful.”

Since last Saturday, race fans from all over the world have lined the downtown streets in rows cheering on cyclists as they speed by heading towards the finish line. Along Broad Street are several designated areas where fans can eat, cheer and socialize.

While perusing Broad Street, port-a-potties are available coupled with sinks that have running water and soap. Located throughout the course are portable water fountains provided by the City of Richmond’s Department of Public Utilities.

“The city covered all aspects,” said Rachel Beasely as she refilled her water bottle. “This is my first bike race and I’m having a great time.”

Volunteers in blue shirts can be seen picking up trash and guiding spectators to crossing areas which is faring well with both locals and out-of-towners.

“Everybody’s been really friendly, helpful, courteous, putting me in the right direction,” said Arthur Cranshaw, a cycling fan from Holyoke in Massachusetts. “It’s been great, no complaints at all, and it’s a gorgeous city.”

A street over on Marshall, fans can escape the heat at the Greater Richmond Convention Center and participate in FanFest. With a wide range of age groups, there is something to do for all ages.

At designated areas located within the convention center, fans are welcomed to a variety of options. Local and non-local artists set up booths to sell artwork relating to the race or the city.

A Kid Zone towards the back of the convention center includes a mini-bike course and bike powered smoothie station. Fans can also purchase official merchandise, eat and have a place to sit down while watching the time trials on a jumbotron.

“This is my first time having my daughter at a race of any kind. It’s been a great experience for her,” said Mechanicsville resident Melvin Strane, who brought his young daughter Charlotte along to the race.

FanFest also includes the medal ceremony for riders finishing in the top three during races. After the ceremony, many of the athletes walk around signing autographs. USA Cycling team member Allie Dragoo is back in Richmond this year after participating in last year’s Collegiate Road National Championships.

“It’s been special,” said Dragoo. “Everyone around I’ve seen so far has been excited to have the race.”

FanFest will continue throughout the duration of the race, which ends this coming Sunday.

“The organization is perfect,” said Edwin Sierra from Ecuador.

By Brian Williams and Sidney Randolph (Special to WTVR.com)