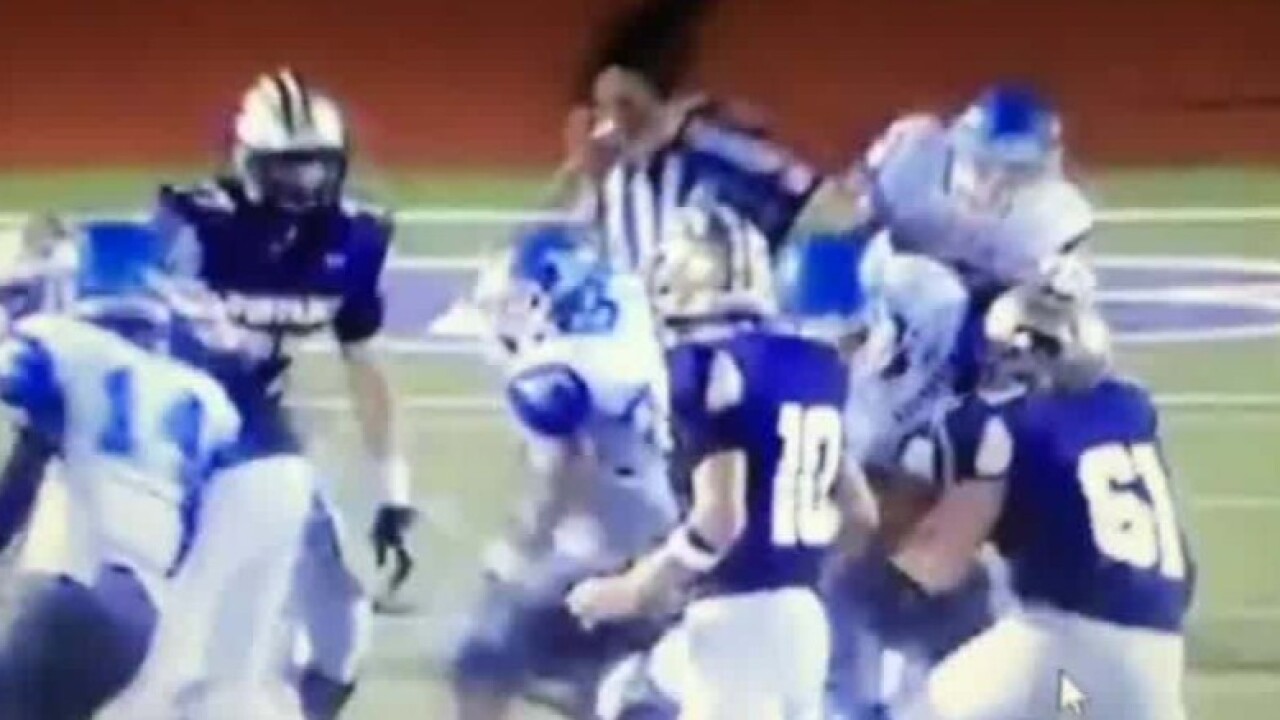 The video couldn’t be clearer: Two players hit a game official in the back during a high school football game. Outside of that, the details are perfectly opaque.

While the players from San Antonio’s John Jay High School claim their assistant coach ordered them to level the official, coach Mack Breed took responsibility in a Thursday resignation letter without expressly admitting to the allegation.

To make matters murkier, Breed, the players and the game official are pointing fingers, leaving game official Robert Watts to issue a five-page statement in which he denies calling players the n-word.

There were hopes that Thursday’s University Interscholastic League hearing would sort out who said what, but it ended without a ruling because the board lacked information, namely the testimony of Breed and players Victor Rojas and Michael Moreno.

The UIL ruled that Breed, who was on administrative leave before his resignation, would not be allowed to coach again until he spoke to the board. Another hearing was scheduled for October.

Ref: It began with ball shove

In his statement, Watts said the game began on a solid note with only one penalty in the first quarter. At halftime, the only complaint among the officiating squad was that one of the team’s secondaries was “getting chippy,” he said.

The game’s tenor changed in the middle of the third quarter.

After a short run up the middle, the John Jay quarterback and a Marble Falls High School player continued to engage after the play was over, Watts wrote. The quarterback, described only as No. 11, looked at Watts expectantly, awaiting a penalty flag. When it didn’t come, Watts said, the quarterback “shoved the ball at me forcefully, hitting me in the solar plexus. This was painful and I grunted in response.”

Watts issued a warning to the player “that if he shoved the ball at me like that again he would be out of the game,” which the player seemed to brush off, the official said.

Later, when the quarterback was playing defense, he pushed Watts after a play for no reason, giving the official a smirk as he returned to his position, Watts alleged. Five plays later, still playing safety on the defensive side, the quarterback got into a scrum with another player that ended with the quarterback “shoving the opponent’s head downward via his hand on the face mask,” Watts wrote.

It was the player’s second unsportsmanlike conduct penalty — his first was for “disparaging language toward an official” — and he was ejected, according to Watts.

Breed has a starkly different account of the encounter.

According to Breed’s version of events, after a “black receiver for John Jay” was ejected from the game, the receiver told Breed that Watts had said to him, “Throw the f***ing ball at me again, n****r.”

Though the player isn’t identified in Watts’ statement, Breed identifies the ejected player as Moses Reynolds, who plays wide receiver, quarterback and safety for John Jay. He also wears No. 11.

“I have learned that players and possibly coaches … have said that during the game I used racial slurs and insults against John Jay High School players. I did not do that,” Watts said in a statement.

Through his attorneys, Watts has said he is considering lawsuits and is urging criminal prosecutions of the assistant coach and both players. Still, Breed insists the racial slurs were what provoked his behavior and while he is “moving forward, others have yet to accept responsibility for their roles.”

“As a black male, nothing offended Mack Breed more than being called a racial epithet, except someone in a position of authority calling his players racial epithets. The slur was heard by multiple players, some of whom were not involved in the hit,” Breed’s statement said.

Reynolds was tossed from the game for throwing a punch even though, according to Breed’s statement, a white player on the opposing team had allegedly punched Reynolds multiple times and avoided ejection.

“Succumbing to the racially charged atmosphere, Coach Breed let his anger get the best of him and he made some regrettable comments. Witnesses can’t agree on what the comments were, but they were interpreted by two players to mean ‘hit the referee.’ The witnesses agree that Breed never explicitly told them to hit the referee, except for Michael Moreno, whose story continues to evolve,” the statement said.

Singling out the teen, Breed said, “Moreno paints himself as a saint on television” when he was actually “out of control” during the game. Not only did Moreno allegedly allow another player to be ejected for Moreno’s hit on Watts, he flagrantly hit a kneeling quarterback — a no-no in football — on the next play, according to the coach.

“His behavior is exactly what one would expect from a rogue player blaming a coach for the player’s actions,” Breed’s statement said.

Breed concluded his statement by saying he “feels that he could have handled the situation better. For that reason, Mack has submitted his resignation and will move forward taking responsibility for his role in the events that occurred. Mack never intended for the kids to hit or hurt the referee, but the result was the same.”

Watts and Breed concur on several points regarding incidents in the second half, though Watts provides additional details.

“I was knocked to the ground and hit my head on the ground. I saw then hit from behind a second time, which forced my head into the ground again,” he wrote.

He acknowledged that he asked a player who had not him, identified as No. 7, why he had hit him.

“His response was, ‘You were in the way.” He then laughed,” Watts said, explaining that he ejected the wrong player from the game.

Watts then warned Gutierrez that if any more game officials were touched, the game was over, Watts said. Gutierrez replied that three of his player alleged Watts had called them “f***ing n****rs,” which he denied, the official said. During the conversation, Breed stood behind Gutierrez “yelling profanities and gesturing angrily at me and also at the other officials.”

‘I was dizzy immediately after the hit’

Watts said that after the game he asked Gutierrez for the offending players’ names and Gutierrez responded that he had forgotten them.

Police escorted the officiating crew to the locker room, and there, Watts inquired about filing complaints against the players who had hit him.

“In the locker room, I noticed a patch of turf burn on my forehead, a cut next to my right eye and a large red bruise abrasion on my left arm, all of which were painful. My left knee was in pain. My neck and back were in immense pain. I was dizzy immediately after the hit and the whole time in the locker room,” he wrote.

He became nauseous on the ride home, and the next day, he went for X-rays and CT scans because he was experiencing headaches, nausea, vertigo, tunnel vision and neck, back and knee pain, he said. He was diagnosed with a concussion, he said, and over the next few days he suffered from memory loss, feverishness, hot flashes, an achy knee and ringing in his left ear.

Jay Downs, an attorney for Watts, took the stand Thursday and said the official was still suffering from post-concussion syndrome. Watts didn’t attend the hearing, and Downs said doctors have yet to clear him to return to refereeing.

Gutierrez spoke during the hearing, both defending Breed and deriding his “poor judgment call.” Breed joined the coaching staff in 2010. He played quarterback at John Jay before attending the University of Missouri, where he played safety.

“I love coach Breed. He was on staff already when I became head coach. He is an upstanding man. He is a man of integrity,” Gutierrez said, but “he violated the sanctity of what coaches are.”

The hearing came a day after the players attended a disciplinary hearing. Pascual Gonzalez, a spokesman for the Northside Independent School District, said that because Moreno and Rojas are minors, no information about the hearing would be released.

The boys’ lawyer said they spoke at the hearing and took responsibility for what they did.

“They understand that they had a choice, they made a choice, it was the wrong choice and they’re just looking for fairness,” attorney Jesse Hernandez said, calling both of them “good kids.”

Hernandez said he presented academic and disciplinary records as evidence. Neither boy spoke to the media.

‘You need to hit him’

The players told ABC News in an interview last Friday that they were following orders.

“While on the sideline, (Breed) pulled me and another player over and he told us, and I quote, ‘You need to hit him,’ ” Moreno said. He further quoted the coach as saying, “You need to hit the ref. He needs to pay the price.”

Watts was targeted, Moreno said, because of unjustified calls in addition to the “racial slurs being thrown at players.”

Rojas said he heard Watts tell one of his Hispanic friends “to speak English, this is America.” Rojas and Moreno alleged they also heard Watts call an African-American teammate the n-word.

The teens were suspended from school for three days. They have been attending an alternative school since then. Superintendent Brian Woods of the Northside Independent School District said during Thursday’s hearing that, as a punitive measure, the teens would not be allowed to rejoin the football team.

No criminal charges have been filed, but Marble Falls police said they are investigating.

Another attorney for Watts, Alan Goldberger, said his client is considering filing defamation and slander lawsuits in the case and wants to see Rojas, Moreno and Breed face criminal charges, he said.

“These students aren’t toddlers. These are crimes that no one should shrug their shoulders and walk away from. This isn’t a case of boys will be boys,” he said. “Every crime that was committed should be prosecuted.”