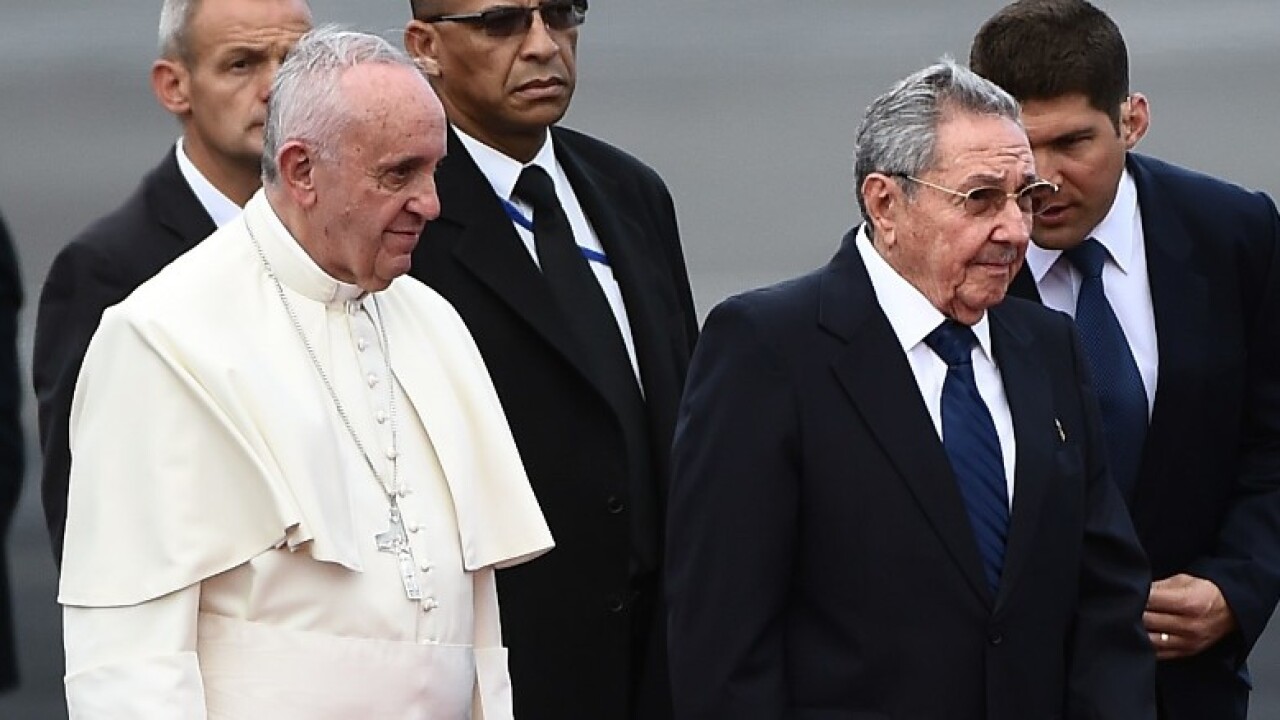 HAVANA, Cuba — Pope Francis celebrated Mass on Sunday before a crowd of thousands of Cubans, telling the communist country to “serve people, not ideas.”

“There is a way to go about serving which is interested in only helping ‘my people,'” Francis continued. “This service always leaves ‘your people’ outside, and gives rise to a process of exclusion.”

Long before dawn, crowds in the communist country began pouring in to see the Pope, who took to the stage across from Christ’s likeness Sunday morning. Before celebrating Mass, he passed through the crowd in the popemobile greeting worshippers.

Three hours ahead of his arrival, the square was already packed with many thousands of people. The Cuban government was expecting 100,000 or more people to attend. The Red Cross set up stations to take care of medical needs that might arise from exhaustion.

Crowds cheered and waved flags as the Pope neared. Cardinal Sean O’Malley, archbishop of Boston, and Cardinal Theodore McCarrick, archbishop emeritus of Washington, were seated near Pope Francis, along with Cardinal Peter Turkson of Ghana. Turkson was a key adviser on the Pope’s encyclical on the environment. Argentine President Cristina Fernandez de Kirchner and Cuban President Raul Castro also attended the Mass.

Cubans waiting for the Pope in Havana’s Revolution Square could not remember ever having seen a picture of Jesus Christ there. And this one had towering stature, with words under the picture reading, “Come to me.”

The government has given the crowd a rare treat, opening up Wi-Fi signals. It has encouraged Cubans to send messages of welcome to the Pope.

Later Sunday, Francis is to meet with government officials and follow that with meetings with local priests and seminarians.

When Francis landed in Cuba on Saturday, he quickly called on the communist nation to “open itself to the world,” while praising its recent restoration of diplomatic ties with the United States.

Francis was greeted by Castro at Jose Marti International airport in Havana, where the Pope urged Cuba to grant its people the “freedom, the means and the space” to practice their faith — an implicit criticism of the many restrictions the country places on religion.

The Catholic Church was once an integral part of Cuban history, the Pope said, inspiring veterans of its war for independence and “sustaining the hope which preserves people’s dignity in the most difficult situations.”

In his short speech, Francis also invoked Jose Marti, a Cuban hero, to deliver a veiled critique of the Castros, said Andrew Chesnut, a professor of Latin American history at Virginia Commonwealth University. Marti, a George Washington-type figure, died in 1895 during the war for independence.

“He specifically referenced Marti as a fighter against ‘dynasties,’ a reference of course to the five-decadelong Castro regime,” Chesnut said.

But a Vatican spokesman, the Rev. Federico Lombardi, said the Pope was not necessarily referring to the Castros.

“I don’t think that it was a citation chosen for a specific reference to today’s situations,” Lombardi said at a Saturday evening news conference.

Francis has criticized Cuba in the past, though. In a 1998 book that he edited, he wrote that Cuba’s “authoritarian” and “corrupt” regime should be scrapped in favor of a representative democracy.

Francis is the third pope to visit Cuba, after St. John Paul II in 1998 and Benedict XVI in 2012. Francis’ call for Cuba to “open itself” to the world echoed John Paul’s remarks, a sign of the Catholic Church’s longstanding efforts to carve out space in a country that has been officially atheist for decades.

Lombardi said the Pope believes religious freedom in Cuba means more than the ability to worship freely. It also entails the right to open schools and practice acts of charity, as well as other missions.

Castro, who has said the Pope has inspired him to consider joining the Catholic Church, effusively praised Francis on Saturday, particularly his criticism of consumerism and environmental degradation. He also thanked him for his role in restoring ties between the United States and Cuba, while calling for the closing of the U.S. military base at Guantanamo Bay.

On Tuesday, the Pope will fly to Washington, a visible sign of the detente he has helped broker between Cuba and the United States.

“For some months now, we have witnessed an event which fills us with hope,” the Pope said. “The process of normalizing relations between two peoples following years of estrangement.”

Francis also called the restoration of diplomatic ties “an example of reconciliation for the entire world.”

“The world needs reconciliation in this environment of ‘third world war by stages’ that we are experiencing.”

Some American conservatives, however, have criticized the restoration of ties with the communist country, saying that the United States should have required the release of political dissidents.

“The Castro brothers are mass murderers,” Rep. Chris Smith, a Republican from New Jersey, told CNN. “They have tortured and imprisoned thousands of dissidents.”

U.S. President Barack Obama and Castro spoke on the phone Friday to discuss the process of normalizing relations between the two countries.

Just last week, the United Nations announced that Raul Castro would travel to New York to attend the U.N. General Assembly. It will be his first visit to the United States in more than half a century.

U.S. and Cuban officials have said that Obama could visit the communist-run island next year, if the two countries progress sufficiently in normalization talks.

On Friday, the departments of Treasury and Commerce announced revisions to existing Cuban sanctions, in the third set of regulatory changes since the President announced in December that the United States would re-establish diplomatic relations with Cuba.