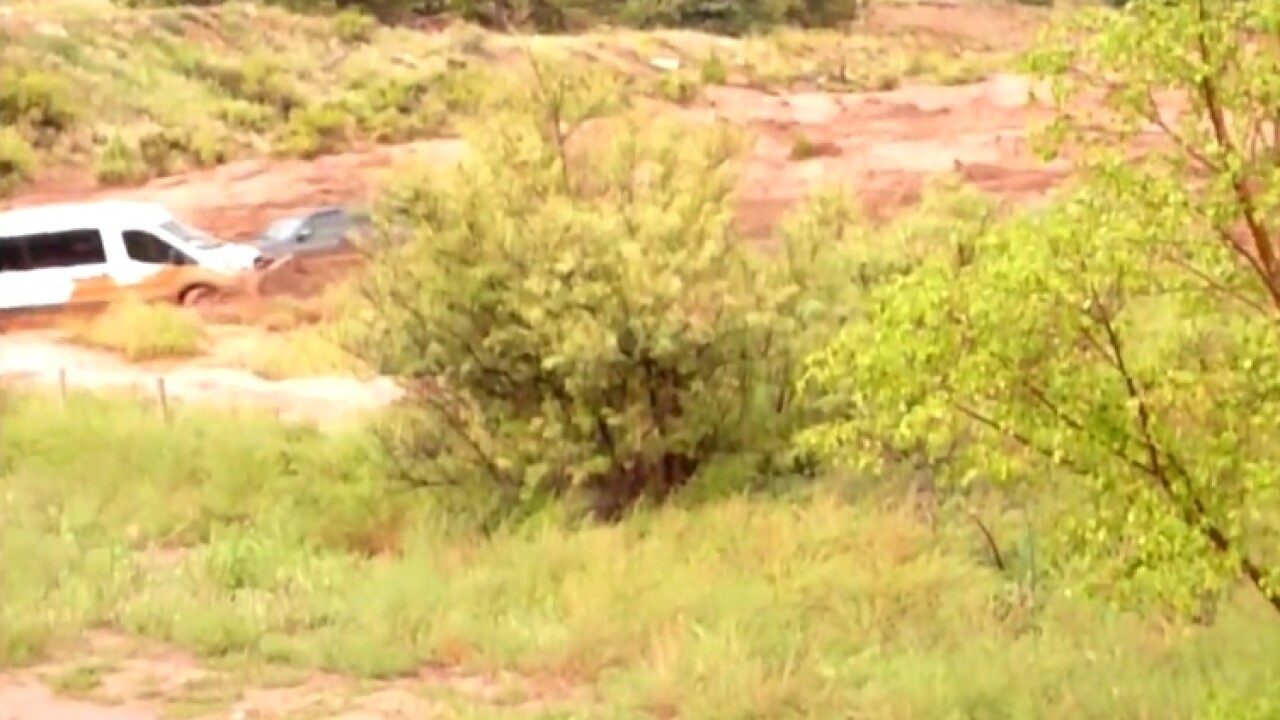 WARNING: This video contains graphic video that may be difficult for some to watch.

Two vehicles carrying women and children from a park were washed away by a flash flood barreling down a canyon near the Utah-Arizona border, leaving 12 people dead and one person missing, officials said Tuesday.

It was not the only deadly incident attributable to the fast-moving water. In Zion National Park’s Keyhole Canyon, four people who were canyoneering were killed and three are missing, National Park Service officials said.

At least six children and three women died in the vehicles that were swept away in the border area, according to Utah officials in the city of Hildale and with Washington County Emergency Services.

Three people survived Monday’s flood, including a boy who was found walking around a creek, said Hildale Mayor Philip Barlow.

Two survived by escaping from their vehicle, he said. The youngest fatality was a child about age 4, said Hildale Assistant Fire Chief Kevin Barlow.

The two vehicles carried a total of 16 women and children after a visit to a park, the mayor said.

Most in the community are members of the Warren Jeffs polygamist sect known as the Fundamentalist Church of Jesus Christ of Latter-day Saints, or FLDS.

One vehicle stopped Monday afternoon at the flooded Short Creek, whose high water prevented any crossing. Some occupants exited the vehicle to watch the flood, the mayor said.

At that moment, “a huge flow of debris and water” came from the canyon behind them, the mayor said.

“It came onto the street behind them and washed them into the ravine, and the dropoff there is 20, 30 feet. So the witnesses say the vehicles were just gone,” the mayor said.

The rush of water was so intense it washed the two vehicles hundreds of yards downstream, and one vehicle was found a quarter mile away, in the creek, the mayor added.

The flooding ravaged an area that straddles the border from Hildale to Colorado City, Arizona.

The flash flood started with heavy rains in the canyons above Hildale, the assistant fire chief said.

“Most of the people were thrown from the vehicles,” the fire official said.

“It happened within like a half hour, 45 minutes,” he said. “(Then) it was just gone. And then the sun was shining again.”

Search called off in Keyhole Canyon

On Monday, authorities found the vehicles of the seven people canyoneering in the narrow Keyhole Canyon but the party was never found.

Tuesday’s search was hindered by high water and continuing rain before being called off during the evening due to flash flood warnings and weather conditions, said Jin Prugsawan, a spokesman for the National Park Service.

CNN affiliate KSTU of Salt Lake City reported that four men and three women were in the group. Spokeswoman Aly Baltrus said they were between 40 and 50 years old and were from California or Nevada. Four bodies were recovered.

Officials didn’t release the names of the dead or the missing.

More than six-tenths of an inch of rain fell within one hour on Monday afternoon, the park service said.

According to the park service, Keyhole Canyon, on the east side of Zion National Park, is a narrow canyon formed by water wearing through rock. People hiking through also have to rappel and climb rocks and swim across small pools of water. A permit is required.

Utah officials are urging residents in Hildale and Colorado City, Arizona, to boil water before drinking.

The agency said it has taken samples of the water supply for testing, but the results will take at least a day to get back.