VINITA, Okla. — Two Oklahoma boys are in the hospital recuperating from burns after their mother said their day care took them to a splash park and let them play with no sunscreen. As of Tuesday, the day care was permanently closed, and the state health department was investigating the facility.

Shaunna Broadway dropped Connor, 7, and Trae, 5, off at 9 a.m. at Happiness is a Learning Center on Friday. When she picked them up, they were crying in pain, she said. They had spent the day at a water park and day care staff apparently told Shaunna that they did not have sunscreen and the boys refused to keep their shirts on.

Photos of the burns were shared on Facebook by the children’s aunt, Amanda Harvey, who gave repeated updates on the boys’ conditions. 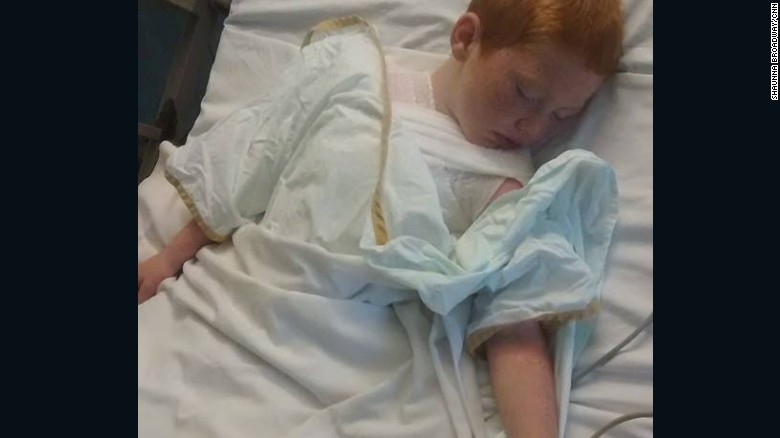 The boys’ grandfather told CNN Tuesday that the children were still at the hospital and had the burned skin removed from their backs. Connor will remain in a wrap for 72 hours to treat his burns, which reached levels of the third degree, said doctors. Each child suffered from second degree burns, he said.

Wayne said the boys asked their single mother to stay home from work so that they don’t have to return to the day care. But they needn’t worry. According to the Oklahoma Department of Human Services, the owner agreed on Monday to cease care permanently.

No one answered the phone at The Happiness is a Learning Center, and the center did not return CNN’s phone call.

A GoFundMe page has been created to alleviate the cost of the hospital bills and Shaunna’s time off of work.

Shaunna told Buzzfeed that staff members at the day care were laughing at her older child for crying about the pain when she picked them up on Friday. At the advice of a pharmacist, she repeatedly applied aloe lotion to their skin, but by Saturday morning, they were in so much pain that they refused to be touched. She took them to a local emergency room.

By Sunday morning, the two brothers were being transported to Shriners Hospital for Children in Galveston with boils on their shoulders and backs and Connor complaining of chest pain.

The day care service has been visited in the past by the department for a list of non-compliance violations. These violations include expired fire extinguishers, incorrectly placed and updated food menu, and “no one on staff with a current director’s credential.”

A summary of facility monitoring can be viewed on the Department of Health’s website.

When suffering from a second degree burn, a person’s outer and underlying layers of the skin’s tissue are destroyed. Second degree burns may take up to four weeks to heal and can cause scarring. Third degree burns are worse, requiring the skin to be replaced in order to treat.

“It’s just devastating. These boys, my world pretty much revolves around them,” the boys’ grandfather said. “I’ve always been grandpa but I’ve always filled in the dad post too so we’re really close and it just breaks my heart because grandpa couldn’t fix this.”