The severe storm watch goes until midnight. Power outages rose with the second round of storms; as of 11:08 p.m. aaround 11,000 were without power.

Here’s a look at some of the storm photos and video that came into the WTVR CBS 6 newsroom. If you would like to add your photo, click the “submit photo” button at the bottom of this story. You can also email your pics and video to pics@wtvr.com.

A neighborhood at Nut Tree and Old Hundred was blocked in by downed trees that took out power lines.

Here are images submitted of that damage.

This video captured the intensity of the storm which felled those trees.

Drivers along 288, near Midlothian, pulled over as torrential rain and hail fell.

Lots of hail pictures were submitted. This one by Matthew Llewellyn shows hail that fell in Powhatan.

There were lots of beautiful images that captured the wall clouds/funnels moving through.

There was a brief reprieve after the first round of storms. The sun came out, and with temps in the low 80s, everything was very steamy. You can see in this picture the humidity and the debris along the road.

Thursday's storm was very electric, at one point 2,000 strikes were recorded in 10 minutes! With the second round of storms, there were two lightning strikes per second.

Instagram user Jaaavis captured this from his balcony in Richmond.

Facebook friend and CBS 6 viewer Allyson Waddel shot this video in Matoaca at about 9:45 p.m., facing directly North. "This storm has a crazy amount of lightning! Stay safe everyone!!!"

Many were entranced by the thunderbolts in the sky over Richmond.

Amanda Rawlette writes: "This doesn't even do the storm any justice, beautiful lightning in Brandermill"

Sam Woods caught great video of the electricity and included the warning "It's getting dangerous out here."

As most people said, the passing storms felt reminiscent of a mild hurricane. The rain was torrential. The wind gust measured at 10:30 p.m. at RIC airport was 70 m.p.h, something Zach said he had not seen since Hurricane Irene.

The video that CBS 6 photographer Andy Pederson shot shows lightning but also captures how hard the rain was falling. He filmed this driving down Hull Street.

The rain totals quickly collected. Look how much water is on the road at Maury Street and Jefferson Davis, in this video submitted by Jay Braxton.

More storms pictures and power outages are expected as the Richmond-metro area gets pummeled again. Click SUBMIT PHOTO to get your pic in the gallery! 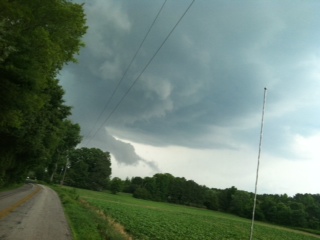