RICHMOND, Va. --  CBS 6 News has learned that the Richmond police officer shot during an officer-involved shooting in city's East End, not far from Rocketts Landing Friday afternoon, remains in critical condition as of 9:30 p.m. according to the VCU Medical Center. Richmond Police Department Spokesman Gene Lepley says his injuries are non-life threatening.

Update: Officer Turner is in critical condition, but his injuries are non life threatening. @CBS6 #RVA

The officer who was shot, William Turner, is a 30-year veteran of the force and master patrol officer.

Police said the shooting happened at Fulton Street and Old Denny Street near Admiral Gravely Boulevard in the city's Fulton neighborhood around 2:30 p.m.

Melissa Hipolit reports that the officer was dispatched to a "mental health situation" call in the 4400 block of Fulton. When the officer arrived and went to get out of his cruiser, the suspect allegedly started firing. As a result, police said that the officer returned fire and both the officer and suspect were shot.

A police source told CBS 6 News that an officer was called to assist the Richmond Behavioral Health Authority with evaluating a mental subject. When the officer arrived, the suspect started shooting as Turner got out of his cruiser.

RELATED: Friends say suspect who opened fire on RPD officer previously shot himself in the face

According to police, Turner and suspect suffered multiple gunshot wounds.

RPD officials said that Turner was transported in a police cruiser to VCU Medical Center with as non-life threatening injuries.

The suspect was also taken to VCU Medical Center with non-life threatening injuries.

Scroll down to see updates from CBS 6 News crews on the scene.

CBS 6 reporter Chelsea Rarrick said that Richmond Mayor Dwight Jones and Richmond Police Chief Ray Tarasovic, along with members of the officer's family, were at the hospital.

According to police sources, the officer suffered a graze to the head and was shot in the stomach. Those sources also said the officer was not wearing a bulletproof vest.

There was a heavy police presence around the hospital for much of the afternoon and evening.

News of the shooting quickly spread around the VCU Medical Center campus.

“It’s a sad situation, yes it is,” said Jarrell Moore, who works near the hospital. “Sad. The first of the year, police get shot. It’s crazy.”

CBS 6 reporter Laura French said there was a heavy police presence in the area and that multiple properties were roped off with crime scene tape around 3:10 p.m.

Depend on CBS 6 News and stay with WTVR.com for updates on this important local story. 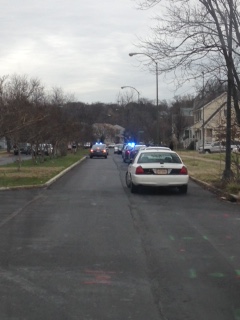