As the Ferguson grand jury's decision was announced Monday night, protesters around the country -- who had begun to gather hours earlier -- responded.

Around 11 p.m. students gathered in front of the Virginia Commonmwealth University library, at Schafer Court. After rallying chants, the group began marching over to Broad Street. Police have arrived on scene. Demonstrators remained peaceful, shouting various chants: "No justice, No peace."

Students walked down sidewalks as police drove beside them on Broad Street. The group continued east over to Grace Street, and assembled in front of the Richmond Police Department. A moment of silence was held for Michael Brown, the 18-year-old fatally shot by officer Darren Wilson on August 9.

The crowd then raised their arms and began singing Amazing Grace.  Students from Virginia Union University joined the group. 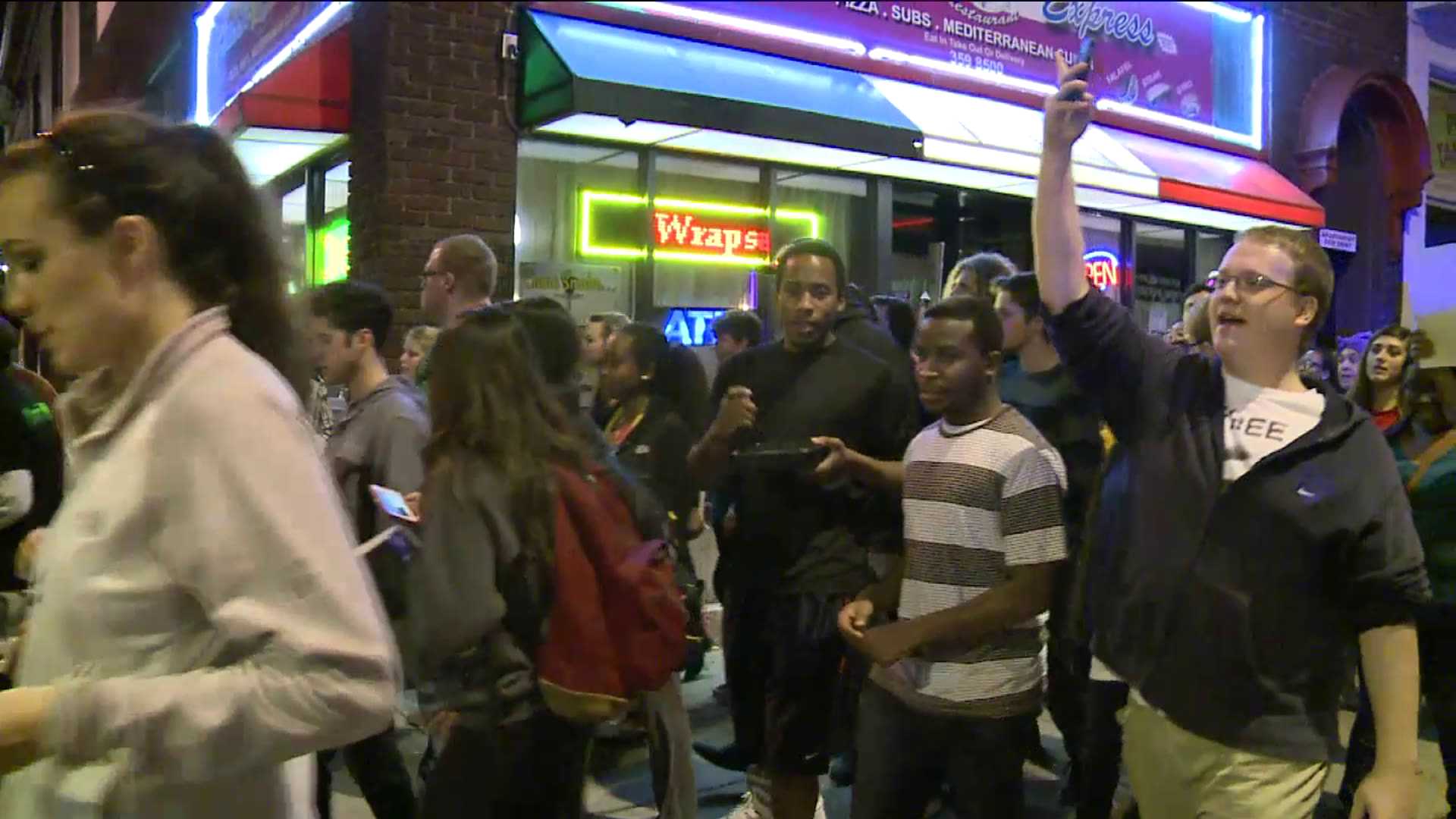 In New York, a roving crowd wound its way through the city, surging to more than 1,000 in Times Square before heading toward the Upper West Side, CNN's Miguel Marquez tweeted.

Earlier in the evening, about 200 people flocked to Union Square, brandishing signs that read, "Jail killer cops," and a large display, in lights: "Black lives matter."

Protesters knocked down barricades and headed toward the West Village before turning north, accompanied by police.

Emotions boiled over in Philadelphia, too.

"Shouts of "f--- the police" at word of no indictment," a Philadelphia Inquirer reporter tweeted. "A man with the mic: 'we don't need to get mad.' Others: 'yes we do!'"

In Oakland, California, shop owners posted signs in their windows, "We support Michael Brown," as marchers took to the streets.

A crowd filled the intersection at 14th and Broadway, and some demonstrators laid their bodies down in chalk outlines, reports on social media showed.

Similar scenes of a "die-in" were staged in downtown Seattle.

"Same story every time, being black is not a crime," protesters shouted, according to a report from CNN affiliate KIRO.

In Washington, D.C., a large crowd assembled outside the White House, with some protesters lying down on Pennsylvania Avenue. In Los Angeles, a city still scarred by the riots of 1992, the police department was put on "tactical alert."

A group also assembled in front of the Colorado Capitol in Denver calling for nonviolence, according to CNN affliate KMGH.

The Chicago Tribune reported that some 200 protesters gathered outside the city's police headquarters, chanting "We are Mike Brown!" and "I am Mike Brown!" They also carried signs, the paper reported, bearing phrases like "Won't stop 'til we get justice," "Killer pigs must pay," and "Stop the racist killer cops."

Later they marched through downtown before stopping at the State of Illinois Center, where they chanted into bullhorns. Chicago police scrambled to keep up.

Protests around the country appeared to be largely peaceful, compared to the scenes unfolding in Ferguson. There, demonstrators set police vehicles ablaze and officers fired canisters into the crowds.

In Atlanta, birthplace of the Rev. Martin Luther King Jr., the streets appeared largely quiet. But at Morehouse College, where about 200 students gathered to hear the grand jury's decision, a collective gasp rippled through the crowd.

Some of the students at the historically black men's school looked at one another in disbelief, others started to tear up, and a few stared ahead as their jaws dropped.

Police sirens wailed in the distance as the students chanted: "Ferguson's hell is America's hell."

Kevin Harvey, a senior dressed in a blue blazer, button-down shirt and penny loafers, walked away from the demonstration with his head down. He said he was angry and bewildered by a storyline that's become all too familiar.

When asked his reaction to the verdict, Harvey tried to sort through his emotions.

"Confusion, anger, and generally just being upset," he said. "I'm scared and frustrated."

Long before the grand jury decision was shared, announcing that Officer Darren Wilson would not be indicted for the murder of 18-year-old Michael Brown, the nation held its collective breath.

As the sun set back East, people rose up -- hours before the decision was announced after 9 p.m. EST.

More than 120 vigils and gatherings, both immediate and for Tuesday, were organized in cities large and small. From Toledo, Ohio, and Bangor, Maine, to Los Angeles, Philadelphia and Detroit, details have been shared on the Ferguson National Response Network.