CENTERTON, Ark. - A fundraising effort is underway to save the life of a badly wounded dog found in Northwest Arkansas. The dog, named Moxy, had fireworks strapped to its body, according to a post on the Centerton Animal Shelter's Facebook page. 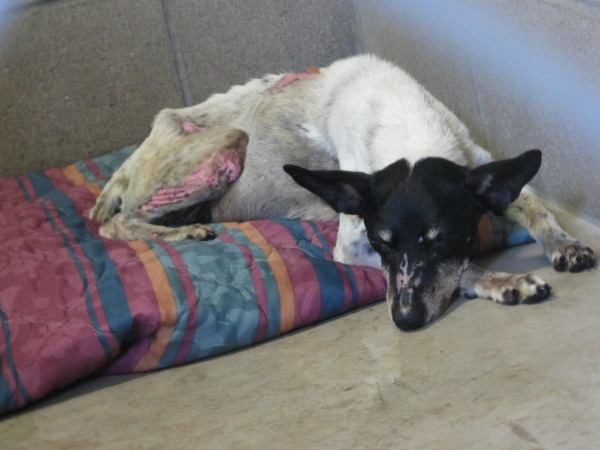 The neighbor said when she went inside to call authorities, the dog wandered next door. Her next door neighbor called officials to come pick up the badly injured dog.

"People that let dogs get into this condition…I just don't have any words," Ritchie said.

Moxy is able to stand and eat on her own, but then lost a lot of energy.

"She was breathing really hard, even the next day and seeing her now she's just peaceful," Ritchie said.

Moxy's veterinarian said she didn't have any broken bones, but she was having trouble walking. Ritchie said they hope Moxy can be returned to her family if she ran away.

"We're definitely hoping that someone's missing her and she's been gone a long time," Ritchie said, "So she can be reunited with family."

Moxy's veterinarian said she is recovering and once the large open wound on her side is healed, she will be released to her foster family. The vet said Moxy is expected to have a clear bill of health by Saturday.

Police said if Moxy was abused, the abuser could face up to a year in jail or up to $1,000 in fines.

The Centerton Animal Shelter is doing a fundraiser to help Moxy get back on her feet. By Thursday afternoon, 84 people had donated a total of $2,510 toward her care.

"Before the person who found her called the shelter, people in the neighborhood saw her with fireworks strapped to her body," according to a post on the fundraising site GoFundMe. "We don't know what all the scars are, but they are old and healing. The vet says she needs to be on fluids for a few days, so I am asking for your help to save this precious girl."