UPDATE: The Henrico County Board of Supervisors voted against the expansion of a local landfill tonight. The Richmond Regional Planning District Commission will have the final vote on Thursday. We will let you know the outcome.

HENRICO, Va. (WTVR)--It's come down to the wire for the Henrico County officials working to stop the expansion of the East End landfill, after the Board of Zoning Appeals, an independent organization, approved the expansion in June.

The landfill is located at 1820 Darbytown Road, with a residential area close by.

CBS 6 learned the Board of Supervisors will vote Tuesday night on a resolution recommended by the county’s administration, stating the Board’s opposition to the expansion.

The move is symbolic, but Tyrone Nelson, the board member who represents the district where the landfill sits, told CBS 6 it could have an impact on the commission that ultimately has the final say on the issue on Thursday.

“I don`t think there is enough trust with the greater community, or is there enough trust with Henrico county for us to be able to move forward with this relationship with any type of belief that this may not happen again,” Nelson said.

The resolution cites the landfill’s past problems with state environmental violations between 2009 and 2011.

According to the resolution, Henrico County issued notices of violation during those years for the landfill’s accumulation of coal fly ash, waste tires and contaminated soil at the facility in violation of the county’s zoning ordinance.

The EPA states that although it depends on each batch of coal, coal ash residuals typically contains contaminants like mercury, cadmium and arsenic, that are associated with cancer and various other serious health effects.

The resolution acknowledged that the landfill changed its management team and corrected its violations in 2011, but said it would continue to have a negative impact on the adjacent neighborhoods for up to 17 additional years. 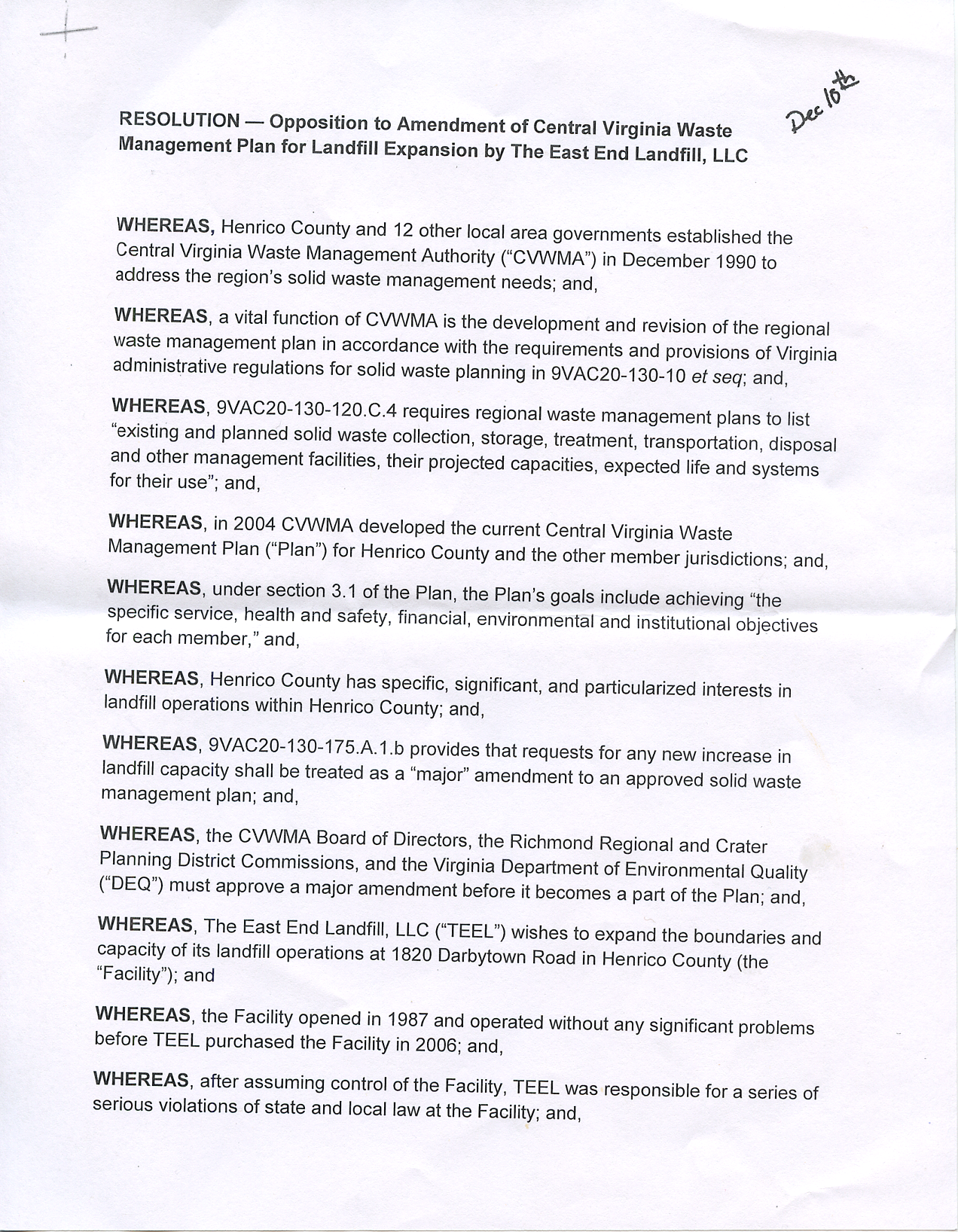 CBS 6 spoke with Darrin Hinderliter, the Director of Landfill Operations at the East End Landfill, on Monday night.

He works for Waste Associates, and agreed to give us tour of the landfill, which only collects construction waste.

However, he did not want to say much before Tuesday’s vote.

“We`ve requested a copy of the resolution, but we were told it would not be available until 7 p.m. tomorrow night, so at this time I have no further comments on the resolution itself,” said Hinderliter.

Dometria Dixon lives across the street from the landfill.

She said the new management team did improve the facility, but there are still problems that she believes will get worse if the landfill expands

“I`m looking at the quality of life for us here, and if what we`re living with with the traffic now, my god, sometimes we`ll never leave out of our subdivisions,” said Dixon.

If the resolution passes Tuesday night, it will go to the Richmond Regional Planning District Commission on Thursday morning.

The commission will decide what to do with the expansion amendment of the Central Virginia Waste Management plan.

There are 33 representatives from 9 different localities on the RRPDC.

Nelson said county leaders united in opposition to the landfill expansion since learning they could fight against it with the RRPDC.

“All of us are now saying we are united together,” Nelson said.