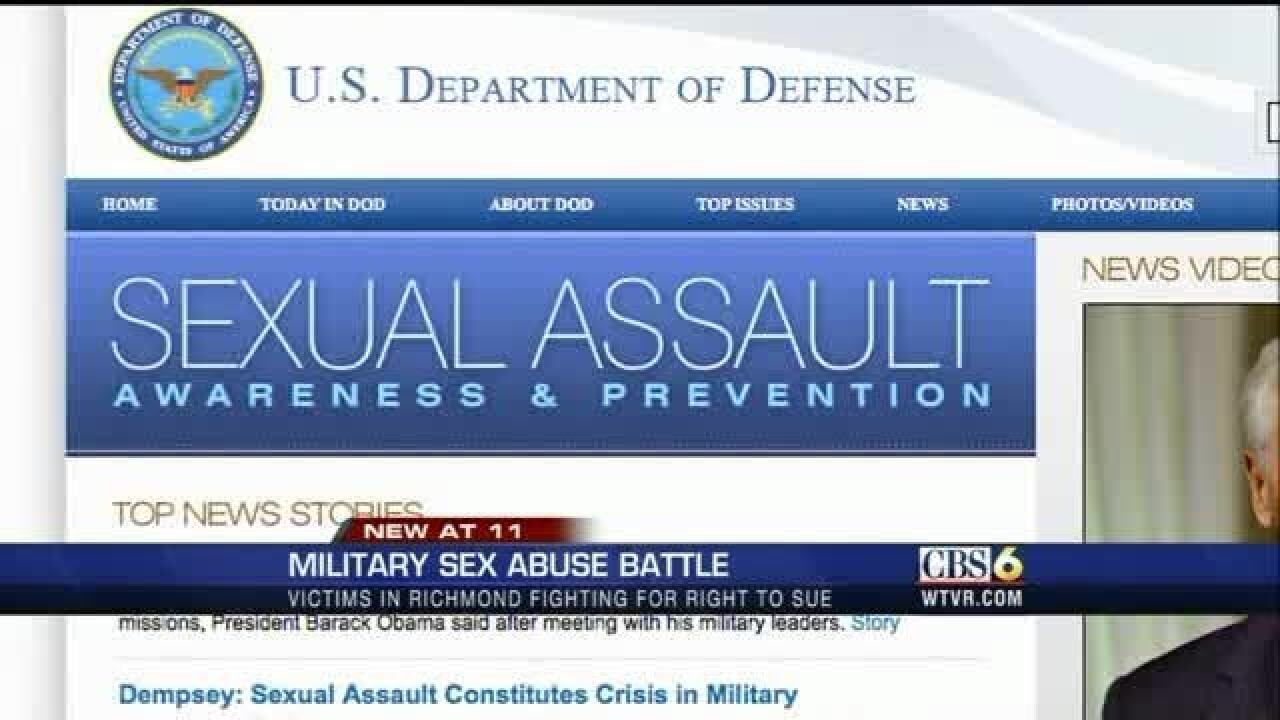 RICHMOND, Va. (WTVR) -- A different kind of fight is being waged by a group of military men and women in the Federal Appeals Court on Broad Street in Richmond.

“The men and women who have come forward in this lawsuit are so brave. They’ve taken a stand and put a face to all of those other survivors,” said Miranda Petersen with Protect our Defenders, a support group for military members. “Rape and sexual assault is an epidemic in our military right now.”

Twenty-five women and 3 men who serve or have served in the military and claim to have been raped or sexually assaulted are appealing a lower court’s ruling that upholds the law stating that soldiers, sailors airmen and marines cannot sue the military for injuries.

“That is why this case is so important," said Petersen. "The majority of military members who are raped or sexually assaulted aren’t seeing justice in their cases and don’t have any other avenue if the military fails them.”

According to the Department of Defense only a fraction of the 19,000 rapes and sexual assaults in the military each year are reported.

Brian Lewis says he was raped by a superior in the U.S. Navy while serving on board a ship in 2000. Brian says his rapist was never prosecuted. Brian was discharged in 2001. He is not one of the plaintiff’s in the case.

“It is a very strong act of patriotism to say that the military hurt us intentionally,” said Lewis. “That is the same thing that every survivor feels that they can’t reach out and get help when in fact they can. And that is what essentially what we’re asking the 4th Circuit to do. Is to give us help to hold the military accountable.”

Petersen says many victims who do step forward are often ostracized and humiliated.

“We have men and women who have signed up to serve their country and possibly give their lives and we’re not protecting them from people in their own ranks and that is absolutely unacceptable,” she said.

Plaintiffs are demanding action when dealing sexual assaults in the ranks of the armed forces, but some legal analysts say the case while shining a light on a serious issue will unlikely lead to a victory in court.

CBS6 legal analyst Todd Stone says the plaintiffs probably will not win the appeal, but might win a public relations victory.

“There is good reason to have immunity in the system. If you’re in the military and you’re injured you can’t just sue the military,” said Stone. “Although this case where they might not be on great legal ground it brings a lot of things to the attention of the Department of Defense and it might make some real policy changes.”

“I think this is the most important thing to take away from in this case is that it really draws attention to the lack of recourse members of the military have,” said Petersen.

The 4th Circuit Court of Appeals is expected to make its ruling in the next few months.