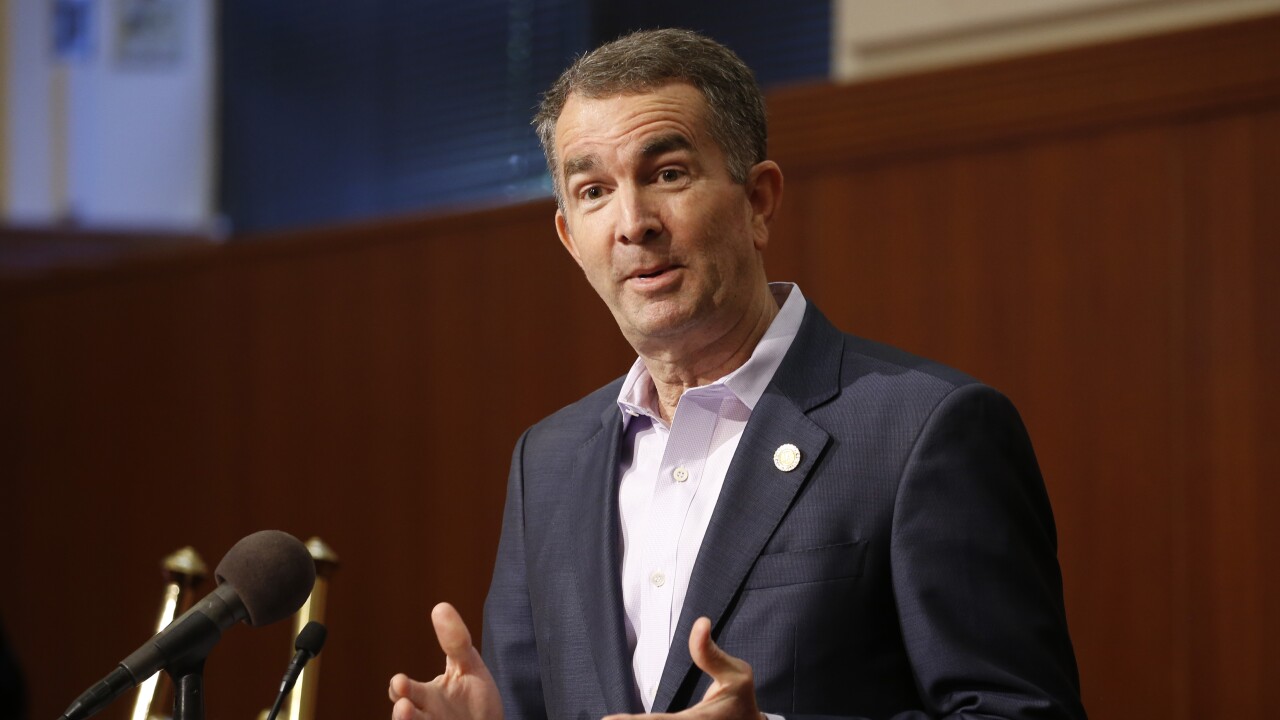 RICHMOND, Va. -- Virginia Governor Ralph Northam announced Friday he has signed five pieces of gun control legislation into law that were passed in the 2020 session of the General Assembly, including the so-called “red flag law” and the reinstatement of the one-handgun-a-month policy.

He also announced he was amending two other bills.

“We lose too many Virginians to gun violence, and it is past time we took bold, meaningful action to make our communities safer,” Northam said in news release about the signing. “I was proud to work with legislators and advocates on these measures, and I am proud to sign them into law. These commonsense laws will save lives.”

House Republicans spoke out against the governor's actions.

“To take a victory lap on such a controversial issue at a time when Virginians are buying firearms at a record pace to protect themselves and their families is counterintuitive," House Republican Leader Todd Gilbert said. "To do so at a time when we need all Virginians unified in the face of the COVID-19 pandemic is counterproductive. It was clear from the moment these bills were introduced that they would impact law-abiding gun owners far more than criminals."

Northam said he signed SB70/HB2, which requires "background checks on all firearm sales in Virginia”; SB240/HB674, the so-called “red flag law”, which creates an Extreme Risk Protective Order, giving a “legal mechanism for law enforcement to temporarily separate a person from their firearms when they represent a danger to themselves or others.”

He also signed SB69/HB812 to reinstate Virginia’s one-handgun-a-month rule; HB9, which “requires gun owners to report their lost or stolen firearms to law enforcement within 48 hours or face a civil penalty.”; and HB1083, which increases the penalty for “recklessly leaving firearms” in the presence of children under the age of 14.

Northam said he proposed amendments to two other pieces of legislation.

SB35/HB421 allows “localities to regulate firearms in public buildings, parks, recreation centers, and during permitted events” and Northam said his amendments “clarify the exemption for institutions of higher education.”

With SB479/HB1004, which prohibits “individuals subject to protective orders from possessing firearms, require them to turn over their firearms within 24 hours, and certify to the court that they have turned over their weapons”, Northam said he was amending the legislation “at the request of the Virginia Sexual and Domestic Violence Action Alliance” to “enhance safety for victims by allowing judges to hold the respondent in contempt of court if they fail to comply with the certification requirements.”

Northam supported eight pieces of gun control legislation in the 2020 session, the only one to fail was an assault weapons ban.

Northam said during a conference call Friday that it will be introduced again.

Gov. Northam announces he's signed gun legislation passed during the General Assembly into law. Still questions about how he will act on minimum wage and budget https://t.co/ZWmABu6FFZ